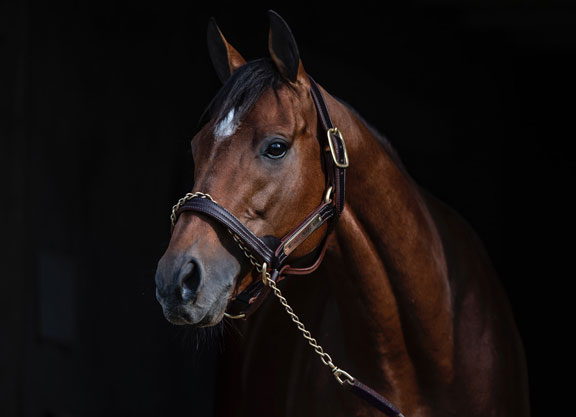 G1 St James's Palace S. winner Without Parole (GB) (Frankel {GB}-Without You Babe, by Lemon Drop Kid) will stand for £10,000 during his debut season at Newsells Park Stud in 2021. He enters stud alongside Nathaniel (Ire), the sire of the great Enable (GB) as well as G1 Prix de Diane winner Channel (Ire) and G1 Premio Lydia Tesio scorer God Given (GB). Nathaniel will stand for £15,000 next year, down from £25,000 the last two seasons.

Newsells Park Stud's General Manager Julian Dollar said, “Nathaniel's progeny have enjoyed another strong year with a further four group winners in 2020, led by Enable who made history this summer with a record third win in the G1 King George [VI and Queen Elizabeth S.]. With 10 group/stakes winners and performers this year and an ever-expanding list of group winners, Nathaniel offers breeders incredible value at £15,000 for this multiple Classic-producing sire.”

“We are also extremely excited to be standing Without Parole,” Gunther added. “He's a horse that's close to our hearts, having been foaled and raised at Newsells Park on behalf of John and Tanya Gunther. A beautifully bred son of Frankel with the looks to match, Without Parole has a pedigree rich in speed and as an out-and-out miler himself, who took his unbeaten run through an emphatic win in the St James's Palace S. in the second-fastest time ever recorded, he should hold great appeal for breeders at just £10,000. Both the Gunthers and ourselves will be supporting Without Parole heavily with quality mares and we also hope to make a number of breeding rights available to breeders.”