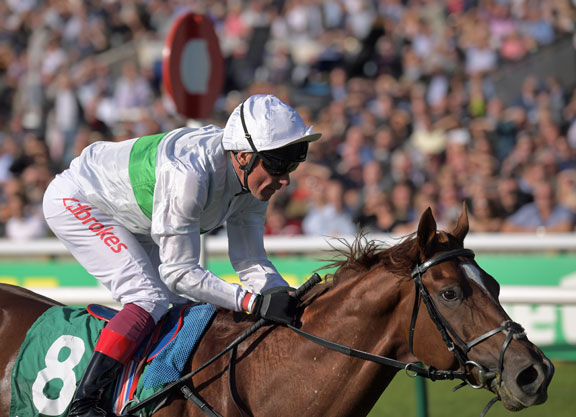 While Too Darn Hot (GB) (Dubawi {Ire}) creeps up through the gears at John Gosden’s Clarehaven Stables in Newmarket, the yard’s Wissahickon (Tapit) will provide an early measurement of its health and power in Saturday’s G3 Betway Winter Derby. George Strawbridge’s 4-year-old has more than a small look of Halling about him, having sauntered through six of his last seven starts including the prestigious Cambridgeshire H. in September in which that former luminary initially rose to prominence for the same handler before finding his way to the stars in the royal blue. Transitioning to the Polytrack here with elan as he dealt with the solid Big Country (Ire) (High Chaparral {Ire}) in both the Listed Quebec S. in December and Listed Winter Derby Feb. 2, all logic points to another commanding performance over the same 10-furlong trip. Heavily-favoured to become the sixth to complete the Winter Derby Trial-Winter Derby double since 2000, it is easy to envisage him fitting into the top level some time soon as his pedigree demands. For now, Gosden is just focused on the next task in hand. “He’s been progressive, and he won nicely there three weeks ago. I hope he can repeat that,” he simply states.

One with a previous record which holds up to inspection is Hathal (Speightstown) and the former G3 Superior Mile winner has taken well to the Tapeta for the Jamie Osborne stable. Under regular rider Nicola Currie, the 7-year-old has scored twice at Wolverhampton and on the latter occasion at the expense of the smart Oh This Is Us (Ire) (Acclamation {GB}) in a handicap over an extended mile Feb. 4. “Obviously the favourite is going to be tough to beat, on all known form,” Osborne said. “This horse has really taken to these all-weather surfaces well and I think he put up one of his lifetime bests last time. The trip isn’t a problem. If you took the favourite out I’d be excited about this run. You can’t run away from one. The horse is in a rich vein of form at the moment, and there’s no reason to think that has changed.”