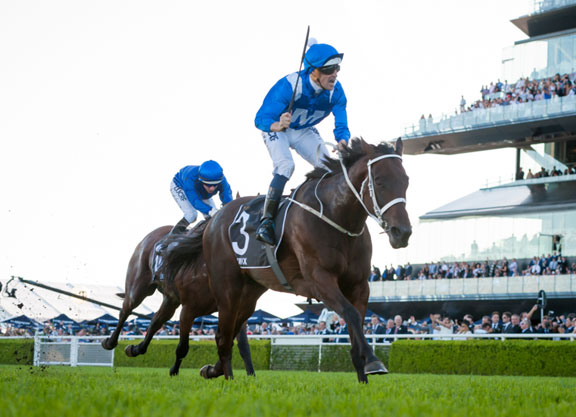 The odds on Winx (Aus) (Street Cry {Ire}) for Saturday's G1 Cox Plate shortened even further after the 5-year-old drew barrier three of 10 at Wednesday's draw. Winx's connections were drawn to be second to choose their barrier, after which the mare shorted to A$2.05 with CrownBet. Second-choice Hartnell (GB) (Authorized {Ire}), the only other Cox Plate entrant at single-digits in the odds, drifted out slightly from A$2.80 to A$2.90 after landing barrier seven, despite the fact that trainer John O'Shea spoke confidently of the draw.

“It's better for us to draw there. If we'd have drawn one, two or three, it'll have been difficult,” O'Shea told Racing.com. “I like where he's drawn–it allows him some galloping room.”

“Each week we've worked him in Melbourne, he looks to have improved. This week's been no different,” O'Shea added. “If you watch last week in the [G1] Turnbull, [jockey] James [McDonald] was able to let him roll along a little bit in the first couple of furlongs, get him into a nice rhythm. From gate seven, we don't have to be bustling; we can take our time and have a similar approach.”

“Ultimately, with all due respect to other runners, what I'd like to see is Hartnell and Winx both get a fair run, a run that suits them, and we'll see a very, very good horse race,” he said. “And it's a privilege to be a part of it.”

Co-third choice Vadamos (Fr) (Monsun {Ger}), who is at A$16 along with 3-year-old filly Yankee Rose (Aus) (All American {Aus}), drew barrier two, but the French shipper could have a late rider change with Joao Moreira potentially stranded in Hong Kong due to an impending typhoon.