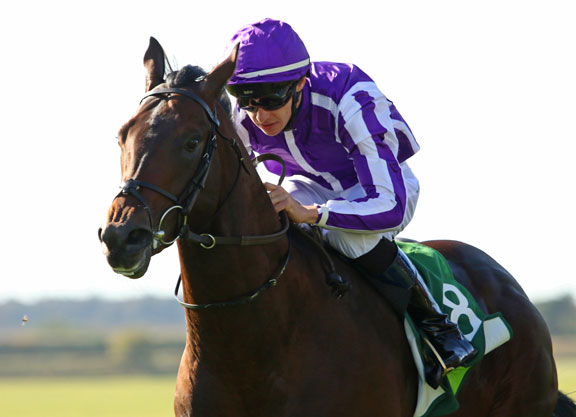 In the second of a series (click here for part one), Tom Frary looks back at the standout Irish-trained juveniles of last season and considers who will be most prominent during their key Classic season.

Finding the future celebrities of Ireland's Classic generation these days is relatively easy, with Ballydoyle almost qualifying as a country in its own right. With the mechanics at the incomparable Rosegreen establishment temporarily out of order for a spell during last summer, it would hardly have been a surprise if their A-list was diminished in form in 2019 but that is not the case. Aside from the leading members of their Classic troupe, opponents will also be extremely wary of the potential of Aidan O'Brien's less-obvious lurkers. It has to be remembered that Dubawi (Ire) was considered a certainty for the 2005 Guineas which ultimately went the way of the less manifest Footstepsinthesand (GB), while the 1000 heroines Homecoming Queen (Ire) (Holy Roman Emperor {Ire}) and Winter (Ire) (Galileo {Ire}) and even last year's Oaks winner Forever Together (Ire) (Galileo {Ire}) were virtually unconsidered at this point of their respective years.

Interestingly, Ballydoyle's top 2-year-old of last year was a sprinter. 'TDN Rising Star' Ten Sovereigns (Ire) (No Nay Never) came along at a time when the ship was only just beginning to steady itself again in August but he shone through on his Curragh debut. That performance was a sensation in itself and a rare demonstration of natural bent on a racecourse introduction from a stable now renowned for its softly-softly approach with its greenhorns. Untried beyond six furlongs, he just had the edge over Shadwell's Jash (Ire) (Kodiac {GB}) on his final start in a terrific renewal of the G1 Middle Park S. which suggested that the mile may not be beyond him. He does hail from a family with staying power, as the dam Seeking Solace (GB) (Exceed and Excel {Aus}) was at home over 11 furlongs, so there is hope he will get it if Coolmore strike out on that path. His sire's influence does seems very strong, however, and with the Commonwealth Cup offering such lure it could be that he takes the “Caravaggio route” and sticks at speed tests such as the G3 Lacken S. early on.

Ballydoyle's 2000 Guineas hopes are the G2 Futurity S. winner Anthony Van Dyck (Ire) (Galileo {Ire}), who has already been brushed aside by the Dubawi pair of Quorto (Ire) and Too Darn Hot (GB), and the G1 Vertem Futurity Trophy winner Magna Grecia (Ire) (Invincible Spirit {Ire}). While visually the latter did not come across as another Camelot (GB) or Saxon Warrior (Jpn) (Deep Impact {Jpn}) in his narrow defeat of Phoenix of Spain (Ire) (Lope De Vega {Ire}) at Doncaster, that was a third quick outing in just four weeks against tough opposition. There is genuine merit in his fast ascent and he is one of those “naturals” his trainer so often talks about. If there is a minor concern where his Guineas prospects are concerned, it is that his dam Cabaret (Ire) (Galileo {Ire}) did very little at three after a highly promising juvenile campaign, but Magna Grecia has a touch of “Footsteps” about him and must be feared in the mile Classics.

Aidan O'Brien's middle-distance prospects are headed by the solid G2 Beresford S. one-two Japan (GB) (Galileo {Ire}) and Mount Everest (Ire) (Galileo {Ire}), who will probably head down the tried-and-trusted G3 Ballysax S.-G3 Derrinstown Stud Derby Trial S. route. They are full-brothers to two under-performers who were evidently held in the highest regard by their trainer in Sir Isaac Newton (GB) and Yucatan (Ire), respectively. Mount Everest came across as a slow learner at two, but his high-class dam Six Perfections (Fr) (Celtic Swing {GB}) is a broodmare who has been gradually getting there as she sows her precious seed. Sticking to the territory theme, Norway (Ire) (Galileo {Ire}) is another fascinating type and it is intriguing that he took the same path when winning the Listed Zetland S. as last year's G1 St Leger hero Kew Gardens (Ire) (Galileo {Ire}). A full-brother to Ruler of the World (Ire), he could easily end up in the G2 Queen's Vase at Royal Ascot and at Doncaster in September as his predecessor did for a stable who have played a major part in lifting the staying scene to its current heights. Speaking of the Leger, the 10-length Thurles maiden winner Constantinople (Ire) (Galileo {Ire}) also has that on his dance card as a full-brother to the promoted and later demoted 2015 winner Bondi Beach (Ire). With the virus interrupting the usual momentum, the darker ones from Ballydoyle could be worthy of even greater respect in 2019 and the once-raced U S S Michigan (War Front) is one of stand-outs. A full-brother to the classy War Dispatch and George Patton, the grey created a lasting impression on his debut when second at The Curragh in June.

As far as the operation's fillies are concerned, the extremely likeable G2 Lowther S. and G1 Cheveley Park S.-winning 'TDN Rising Star' Fairyland (Ire) (Kodiac {GB}) is another for the sprints from midsummer onwards, while the staying types Hermosa (Ire) (Galileo {Ire}) and Fleeting (Ire) (Zoffany {Ire}) are certain to be there or thereabouts as the various European Oaks come around. However, the extraordinary Goddess (Camelot {GB}) could easily eclipse them if she can get back from a dismal effort in the G3 Silver Flash S. and recreate her 'TDN Rising Star'-earning July Leopardstown maiden performance. Her full-sister Athena (Ire) had not shown half of her ability at the same stage and that fellow descendant of Urban Sea (Miswaki) still managed to add another top-level victory to her eminent dynasty as a 3-year-old. Also a close relative of the high-class Montjeu (Ire) pair of Bracelet (Ire) and Wading (Ire), with the latter being the dam of the Rockfel-winning 'TDN Rising Star' Just Wonderful (Dansili {GB}), Goddess could yet be a luminary in the category of Peeping Fawn (Danehill) and Minding (Ire) (Galileo {Ire}). Another 'TDN Rising Star', the seven-furlong Gowran Park maiden winner Chablis (Ire) (Galileo {Ire}), a full-sister to The Pentagon (Ire), is another who is bound to make her presence felt as the G1 Epsom Oaks nears.

Away from Ballydoyle, there was real strength in depth in Ireland in 2018 with Sheikh Hamdan bin Rashid Al Maktoum's unbeaten Madhmoon (Ire) (Dawn Approach {Ire}) readily accounting for some smart representatives of that yard on his two starts which included the G2 Champions Juvenile S. on

Leopardstown's Irish Champions Day card. His trainer Kevin Prendergast knows this family inside out, as it also features his recent Irish 2000 Guineas hero Awtaad (Ire) (Cape Cross {Ire}), and there is a perfect blend of speed and stamina to suggest another Classic victory for the veteran handler is feasible. Patrick Prendergast's incredible over-achiever Skitter Scatter (Scat Daddy) went from unlikely successes in the Silver Flash and G2 Debutante S. to a more widely-expected one in the country's pinnacle contest for 2-year-old fillies, the G1 Moyglare Stud S. Anthony and Sonia Rogers's relative of the likes of Soldier of Fortune (Ire) (Galileo {Ire}) and Intense Focus (Giant's Causeway) punches well above her weight and is almost a female Rock of Gibraltar (Ire) in the making. One of Scat Daddy's rare surprise packages, she could easily prove to be the nation's signature filly at the end of 2019.

Joseph O'Brien upstaged Senior on two big stages last term and one of them was in Newmarket's G1 Fillies' Mile, where Iridessa (Ire) (Ruler of the World {Ire}) ousted Hermosa and the British femme fatale Pretty Pollyanna (GB) (Oasis Dream {GB}). She will be out to prove that was no fluke this season as she bids to maintain her trainer's golden start to his new career, while talisman handler Dermot Weld has his customary clutch of potential. Khalid Abdullah's Gowran Park maiden scorer Tankerville (Kitten's Joy) is a fascinating Derby prospect as a son of the GII New York S. scorer Starformer (Dynaformer), while among his fillies is Moyglare Stud's homebred Kiss For a Jewel (Ire) (Kingman {GB}). Only seen once when second in a maiden at Galway in October, she is a daughter of the high-class Sapphire (Ire) (Medicean {GB}) who is a real project for the master of Rosewell House.

Our next Winter Warmers installment will reflect on the top juveniles in France in 2018.