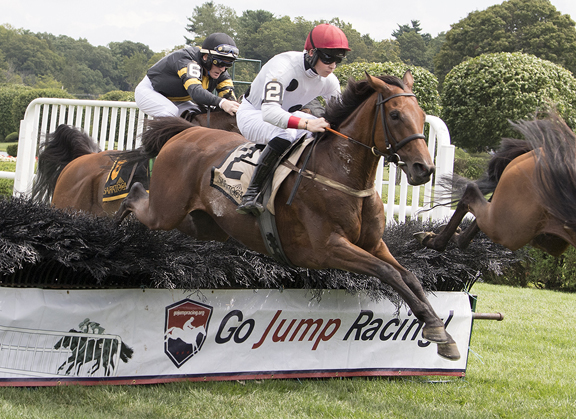 When buying at sales or privately, owners always strive for the Saturday horse, one capable of competing in a track's best races.

For some part-time and full-time Saratoga Springs, N.Y., residents, it's important to have a horse capable of running at Saratoga Race Course. Any day will do.

Edward P. Swyer, a longtime steeplechase owner and a Saratoga Springs resident, always likes to have a horse that fits Saratoga. Last year, he had a very nice one, Iranistan (Einstein {Brz}), who finished second in the GI A. P. Smithwick Memorial Hurdle S. and third in the GI New York Turf Writers Cup Hurdle H.

Winston C arrived a little rough around the edges and had a decent debut, finishing third by less than a length in the Marcellus Frost Champion Hurdle, a race for jump-racing newcomers known as novices for trainer Jonathan Sheppard.

The Hall of Fame trainer's crew in Pennsylvania put a high gloss on Winston C, and Swyer decided to skip the next logical start, Saratoga's Jonathan Kiser Novice S., and go straight to the top level in the Smithwick. He caught a large field, mostly older and more seasoned, and beat them handily July 25.

Four weeks later, essentially the same field tried him again at 2 3/8 miles, and he trounced them by 8 3/4 lengths. Swyer and his friends went to the Saratoga winner's circle not once, but twice.

Winston C. had a great Saratoga meet, and he was the first horse to win both of Saratoga's big hurdle races in 20 years. But championships largely are decided in the fall, and a new group of well-rested competitors await him in Thursday's GI Lonesome Glory Hurdle H. at Belmont Park.

Winston C is the 160-pound highweight for the 2 1/2-mile Lonesome Glory, and he will be favored. But the competition will be distinctly tougher than his summer forays at Saratoga.

Bruton Street-US's Scorpiancer (Ire) (Scorpion {Ire}) has an Eclipse Award to his credit, earned in 2017, and he won the GI Calvin Houghland Iroquois Hurdle S. for the second time in May. He also is a member of a red-hot Jack Fisher stable.

Bruton Street-US and Fisher also will field the 2017 novice champion, Moscato (GB) (Hernando {Fr}), who won the GII Temple Gwathmey Hurdle H. in April before finishing third, beaten a length and a head, in the Calvin Houghland Iroquois.

The Lonesome Glory also will feature three horses flying under the radar. Irvin S. Naylor's Bedrock (GB) (Fastnet Rock {Aus}) finished a tired sixth in the Smithwick in his initial U.S. start, but he has decent overseas credentials and should benefit from the Saratoga experience.

Sharon Sheppard's Redicean (GB) (Medicean {GB}), also trained by Leslie Young, won the Kiser and then showed that he has some speed when fourth in the John's Call S. at Saratoga.