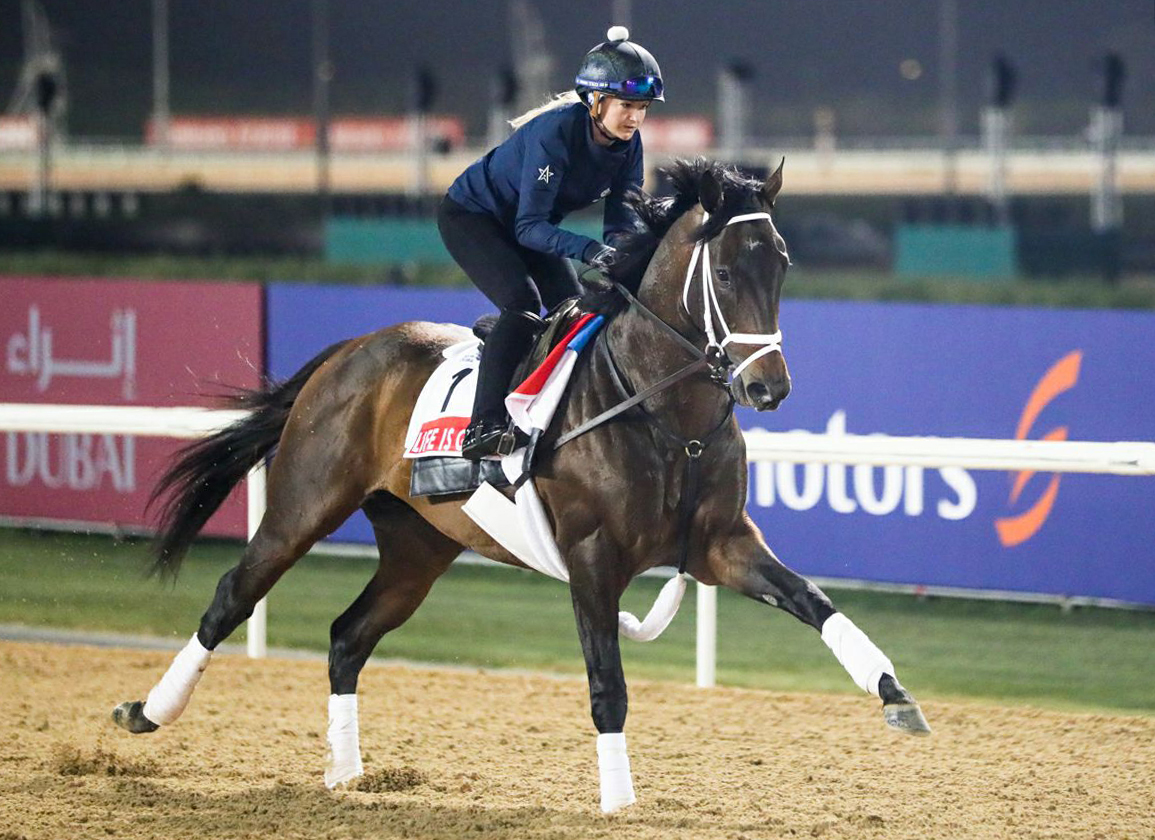 DUBAI, UNITED ARAB EMIRATES — With the exception of host Sheikh Mohammed, who has won the G1 Dubai World Cup no fewer than nine times, and the late Sheikh Hamdan (two), no other owner has managed to post more than one victory in the event, now worth $12 million. That could all change in the space of a little more than two minutes Saturday afternoon when Kenny Troutt's WinStar Farm sends out a pair of runners consisting of different partnerships.

On a rating of 124, 'TDN Rising Star' Life Is Good (Into Mischief) is the highest-rated galloper that will take part in the World Cup meeting, one pound clear of G1 Longines Dubai Sheema Classic entrant Glory Vase (Jpn) (Deep Impact {Jpn}) and two ahead of fellow World Cup hopeful Hot Rod Charlie (Oxbow).

Bred by Gary and Mary West, Life Is Good was purchased by China Horse Club and Maverick Racing for $525,000 from the Paramount Sales draft at Keeneland September in 2019. Having tasted defeat just the one time in his career in that memorable throwdown with future champion Jackie's Warrior (Maclean's Music) first off a layoff in the GI H. Allen Jerkens S. last August, the burly bay has since won the GII Kelso S. and back-to-back Grade Is in November's BigAss Fans Breeders' Cup Dirt Mile and the Pegasus World Cup Invitational in late January.

“The timing has been good, he didn't work for a couple of weeks after the Pegasus. He's worked every week since and he's worked super,” reports WinStar President/CEO and Racing Manager Elliott Walden. “He seems like the same horse we had at home. Same energy, same enthusiasm.”

Ready To Rock and Roll…

That was on full display Wednesday morning at Meydan. A well-muscled Life Is Good made his customary appearance just after 5 a.m. and tanked around the racetrack with powerful, yet controlled strides. Afterwards, he was met by trainer Todd Pletcher, Walden and WinStar's David Hanley back where he entered the track, a throng of international media looking on intently.

“He always takes a pretty keen hold and from the videos I've seen in the morning, he's taken a good hold without being too wound up. All of that is positive,” Walden said. “If he wasn't eager, we'd have to be concerned. He's stayed in the feed tub good, Todd is really happy with him, says he is ready to go.”

The colt's energy level aside, Walden and the WinStar braintrust have been pleased with the way Life Is Good gets over the Meydan dirt surface and has little concern where it comes to his ability to handle it come Saturday.

“He's a horse that has run at multiple racetracks, doesn't need to take his track with him,” Walden said. “He's had success wherever he's gone, so from that standpoint, I don't think we're too concerned about the racetrack. The surface seems nice, you don't hear them when they come over it and he seems to bounce off it pretty well.”

“Todd's routine is to stand them [at the gate] once and [Life Is Good] certainly knows that something is ready to happen,” the Classic-winning former conditioner said. “He schooled in the paddock [Wednesday night]. You have to van over from the quarantine area and did that without turning a hair.”

While clearly the standout runner in the World Cup field that also includes entrants from four other jurisdictions, Life Is Good is untested over the 2000-meter distance. Walden is quietly confident that will be a non-issue.

“I feel good about it. I wouldn't trade places with anybody,” he said. “Until they do it, you always have a little bit of a concern, but he has always trained like he'll continue to go on and I've never thought that we've gotten to the bottom of him. That makes us feel good about his chances at a mile and a quarter.”

A victory Saturday would give Life Is Good Grade Is at three different distances–not to mention the near miss at a fourth– further enhancing his value at stud when that time comes.

“When we decided to bring him back at four, we decided that we were not going to duck anybody,” said Walden. “We had this race in mind, we had the Pegasus in mind and we were going to take on anybody that came. It's important to find out if he can run a mile and a quarter. Winning the [GI] Breeders' Cup Dirt Mile and the Pegasus last time, it seems the right time to try 10 furlongs.”

And to boot, Life Is Good is out of a mare by a sire that has contributed mightily to WinStar becoming one of the world's premier stallion stations.

“Distorted Humor mare, he's got sire potential top and bottom. I think he gets some of his athleticism from the Distorted Humor side of his pedigree,” Walden said, pointing out that the cross over Forty Niner-line dams has resulted in Grade I winners–and sires–Practical Joke and Goldencents.

The field is set! Here's your final field for the #DubaiWorldCup!

“We were prepared to go to $250,000 or so for him and I was very surprised we got him for $110,000,” Walden said. “We really liked his race record. We felt that he could be a good handicap horse and we bought him with the intention of sending him to Bob [Baffert] in California because that division out there seemed a little bit short on numbers and it's worked out well.”

Bred by Scott and Debbie Pierce, Country Grammer has done nothing wrong in three runs to date for his new connections. Narrowly beaten in the 2021 GII Californian S. by Royal Ship (Brz) (Midshipman), he reversed form in the GI Hollywood Gold Cup last May before going missing. Set what seemed to be a lofty task returning to action in the G1 Saudi Cup Feb. 26–with Amr Zedan now part of the ownership–Country Grammer came to win the $20-million test late, only to be run down by Emblem Road (Quality Road).

“Bob did an outstanding job of getting him there off a 270-day layoff,” Walden said. “He had been training lights out in the days leading up to the [Saudi Cup] and I don't think Bob would have put him on the plane if he didn't think he was going to run well.

He continued, “At the eighth pole, I thought he was going to win it. [Emblem Road] was in the middle of the racetrack and I'm not sure he ever saw him until it was too late and then he tried to gallop out back in front. He really ran a tremendous race.”

Country Grammer, for whom Saturday's trip is definitively not a question mark, has been much handier to the pace in the three starts since his acquisition and Walden sees him sitting a similar sort of trip this weekend.

“He'll be close I think. With Bob he has shown a little bit more speed,” he said. “Leading up to the Saudi race, he had three gate works, really wanted him to be ready off the layoff. He doesn't have the kind of speed that Life Is Good has, but he should be in the first flight somewhere.

“He looks good. He bounced out of Saudi well,” Walden continued. “He was maybe a little bit tired the first week, but he's come back well, good energy. He's had a couple of easy breezes over here and Bob has been happy.”

In 2009, two years after finishing 11th to Discreet Cat (Forestry) in the G2 UAE Derby and having finished third to Curlin (Smart Strike) one year prior, Well Armed (Tiznow) gave WinStar its first World Cup, gliding home by some 14 lengths. Walden would be thrilled to see the farm's name engraved on the trophy at least once more.

“It would mean a lot. It's great race. A race that if you're in the horse business, this is the kind you want to compete in and try to win. It would be a great honor to have one of these two horses win the World Cup,” said Walden.