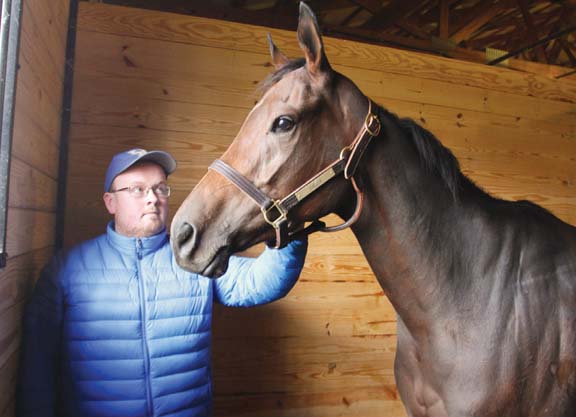 Elliot Sullivan and Chella | The Vindicator

When you look up the “winningest horse,” the honor traditionally defaults to the Thoroughbred that has bankrolled the highest purse earnings. In 2015, the trainers of the highest-earning individual horses in North America, from the top of the list down, read Bob Baffert, Mark Casse, Shug McGuaghey and Kiaran McLaughlin.

Given the strength of their stables and the elite levels of the sport at which they compete, it's no shock–year in and year out–to see those trainers at or near the top of that list.

But when you rank the winningest Thoroughbreds in terms of actual trips to the winner's circle, a different style of horse–and a different type of trainer–emerges.

With no disrespect to American Pharoah (Pioneerof the Nile), who earned $8.28 million in 2015 under the care of conditioner Baffert, it can arguably be a tougher task for a horse to lead the continent in total number of wins than to amass the most purse earnings.

This is because the annual battle for most victories is largely fought among tenacious, gritty claimers and starter-allowance stalwarts. These warriors tend to compete at the lower levels of racing's class echelon not for a lack of heart, but because they are not the most physically gifted. Holding these types of runners together for months on end requires lots of hands-on horsemanship and more than a little luck.

That's why it's amazing to see that a single trainer–27-year-old Elliot Sullivan–conditions not one, but both of the top two Thoroughbreds in terms of wins in the continental United States with a bit more than a week to go in 2015.

Sullivan, based in Ohio, calls himself “blessed” to have both Tribal Custom (Tribal Rule), a 5-year-old mare with 11 victories, and Chella (Where's the Ring), a 4-year-old filly with 10 wins, under his shed row.

[Note: Two other horses, Aranzadi (Bluegrass Cat) and Limoncillo (PR-Harbor Master), also have 11 wins each in 2015. Both compete at Camarero Race Track in Puerto Rico, where year-round racing is limited to an island-bound horse population. Hence the “continental U.S.” distinction in describing Sullivan's feat.]

“When you win the amount of races that Tribal Custom and Chella have won in a calendar year, those horses deserve respect,” Sullivan said. “I have a lot respect for horses at the cheaper level. I mean, I don't think I've ever even seen, in person, a horse with the physical attributes of an American Pharoah. Not where I race.”

Sullivan is in his seventh year as a licensed trainer but has a lifetime of experience around the backstretch. He grew up in Ohio, where his father, Don Sullivan, trained horses on and off between 1989 and 2008. His mother, Heidi Harper, was a jockey between 1989 and 1993. Aunts and uncles in his extended family have owned Thoroughbreds for decades, and a cousin, Joe Ambrosia, currently manages the training division at Live Oak Stud in Ocala.

Not only are his top two distaffers running well, but Sullivan is having his own breakout season so far in 2015, with a 79-45-49 record and $724,748 in earnings from 279 starters. He is second in terms of wins at the current Mahoning Valley Race Course meet.

He obtained both Tribal Custom and Chella via modest claims earlier this year, but that's where the similarities end between the two stars of his stable.

“Chella is a great horse to get along with,” Sullivan explained. “Anyone could take care of her as far as being around her. She's very sweet. She's the kind of horse you want to be around. She does nothing wrong, doesn't bite, is easy to handle. She has a lot of class.

“Tribal Custom is the total opposite. She can be vicious at times. That's how you know she's doing good–she'll attack people walking down the shed row. She's a totally different mindset than Chella. Chella doesn't bother anyone. Tribal Custom is more of a savage. She wants to get at anything that's in her way. She's got a real strong-minded attitude.

Sullivan thought she was a bargain and dropped a claim slip on his own behalf when Chella showed up for $10,000 on Apr. 1, 2015 at Mahoning. But when he took possession of his new filly after a second-place finish as the beaten odds-on favorite, it was almost as if Sullivan was the victim of an April Fool's Day joke.

“The day I claimed Chella she was actually placed on the vet's list,” Sullivan said. “When I got her she was a real muscle-sore horse. So she was kind of a project from the beginning.”

But the challenge of getting a horse with talent healthy enough to win is the type of project Sullivan seems to have a knack for.

“We do a lot of therapeutic things. I use magnetic blankets. We ice our horses every day. They get done up in four bandages–just a lot of work,” Sullivan said. “They give us a lot, so we put a lot into them.”

Three weeks after claiming her, Sullivan entered Chella in a Mahoning starter-allowance and she won convincingly. When his stable shifted to Thistledown, Chella, a sprint specialist who can race on the lead or press from just off it, racked up two straight wins in starter/optional claimers. By the midpoint of 2015, she had won four races on the year and Sullivan had tripled her purchase price in purse earnings.

Around this time Sullivan became enamored with Tribal Custom, a chestnut California-bred who had started out her career with wins at Hollywood Park before ending up in West Virginia. On May 26, Sullivan had entered one of his better $12,000 claimers, Sonny Short Stack (City Zip) in a turf sprint at Mountaineer, figuring she would be solid as the 6-5 favorite.

“It was Tribal Custom's second start on the grass, and she beat Sonny Short Stack,” Sullivan said. “I had a lot of aspirations for my horse, and she beat me in the last few jumps going 4 ½ furlongs, which really isn't [Tribal Custom's] distance at all. I really took a liking to her then and said, 'This horse is really something on the grass. I've got to get her.'”

Sullivan didn't go after Tribal Custom when she won her next start, a dirt sprint, for $12,500. But after a third-place allowance try, he recommended to one of his main clients, Gabes Stable LLC (the owner of Sonny Short Stack), that they try and claim her when she dropped in for $7,500 on July 11. Tribal Custom got the win, and Sullivan got the mare.

“And then she won three straight for me on the turf,” Sullivan recalled. “And now she's undefeated lifetime on the grass, six for six.”

While Tribal Custom was beating up on starter and optional claiming foes on the Mountaineer lawn, winning several times by five or six lengths to run her seasonal win total to 10 by late September, Sullivan was having a hard time finding races for Chella, who by that point had racked up seven wins on the year.

“You always wonder how far a horse is going to take you every time they win a bunch of races in a row, and it gets tougher and tougher,” Sullivan said. “But Chella got to where races wouldn't go for her in Cleveland. Nobody locally would run against her. I even nominated her for a few starters at Penn National and they would never go, so that's how I ended up taking her to Kentucky.”

Sullivan himself is no stranger to the Bluegrass State. Earlier in his career, he moved there for four years. Although the difficult circuit did not reward him in terms of wins and purse earnings, Sullivan said he gained immense knowledge by observing how meticulously the nationally known, high-class stables operated.

“I started taking things a lot more seriously,” Sullivan said. “I learned a lot while I was there. Now I'm at the barn seven days a week, and it's a 24/7 thing. We're a very hands-on stable. We're very thorough with everything.”

On Sept. 13, Chella dusted a starter-allowance field of nine at Churchill Downs as the 6-5 favorite. On Oct. 11, she fired right back with a sharp score at Keeneland over similar competition while bet down to 9-10 odds. It's not often that an Ohio-based outfit pulls off a Churchill-Keeneland double with the same horse.

A seven-length starter romp at Mahoning on Nov. 2 was victory No. 9 in 2015 for Chella. On Nov. 23, Sullivan took an ambitious stakes shot on his home track in the $75,000 Mahoning Distaff S., but Chella was overmatched from the outermost post and finished fifth, snapping her eight-race undefeated streak.

On Dec. 3, with the grass season finished in his part of the country, Sullivan ran Tribal Custom in synthetic-track sprint at Turfway Park for win No. 11 on the year.

Tribal Custom will go for win No. 12 this Sunday at Turfway, drawing post 11 in a 14-horse starter-allowance.

“She's going into it pretty good. I expect her to be tough,” Sullivan said, adding that he is mulling one more start for Chella this year if he can find a suitable race.

When asked to speak about the accomplishment of having the one-two winningest horses in the continental U.S., Sullivan comes across as a self-deprecating horseman. He does concede that the feat is “pretty cool,” but is quick to credit his stable help and the support of patient owners. Although he owns Chella himself, Sullivan said he would rather see Tribal Custom get the year-end accolades.

“It means more to me for Tribal Custom, because it means more for me for my client to get that honor,” Sullivan said. “Chella's had such an amazing year for me. But I'd rather train the winningest horse for someone that I work for.”

As for 2016, Sullivan said, “Tribal Custom has another year of starter eligibility next year. Chella does not. They've both earned a break. They're both pretty close to going to shelf to get a little time off.”

Their vacations are likely to come at Sullivan's farm in Berlin Center, about 10 miles down the highway from the Mahoning backstretch. He has room for about nine layups and five broodmares. His two yearlings just shipped to Florida to be broke and to start galloping; both will return in the spring.

As for Sullivan himself, he's not sure where he'll be racing once the Mahoning meet ends Apr. 23. He's summered at Thistledown the last three years, but is keeping his options open for 2016.

“I'm kind of in a building process. I don't have anything big, but I have some mares that we bred this year,” Sullivan explained. “I really enjoy where I'm at right now–the claiming game. But everyone has aspirations of going beyond that, and I would say that I do too.

“I let it go where it takes me. It's been a great ride, you know? Racing's taken me to a lot of great places, and I'm grateful and blessed for it.”