Will Life Is Good and Flightline Meet? Maybe 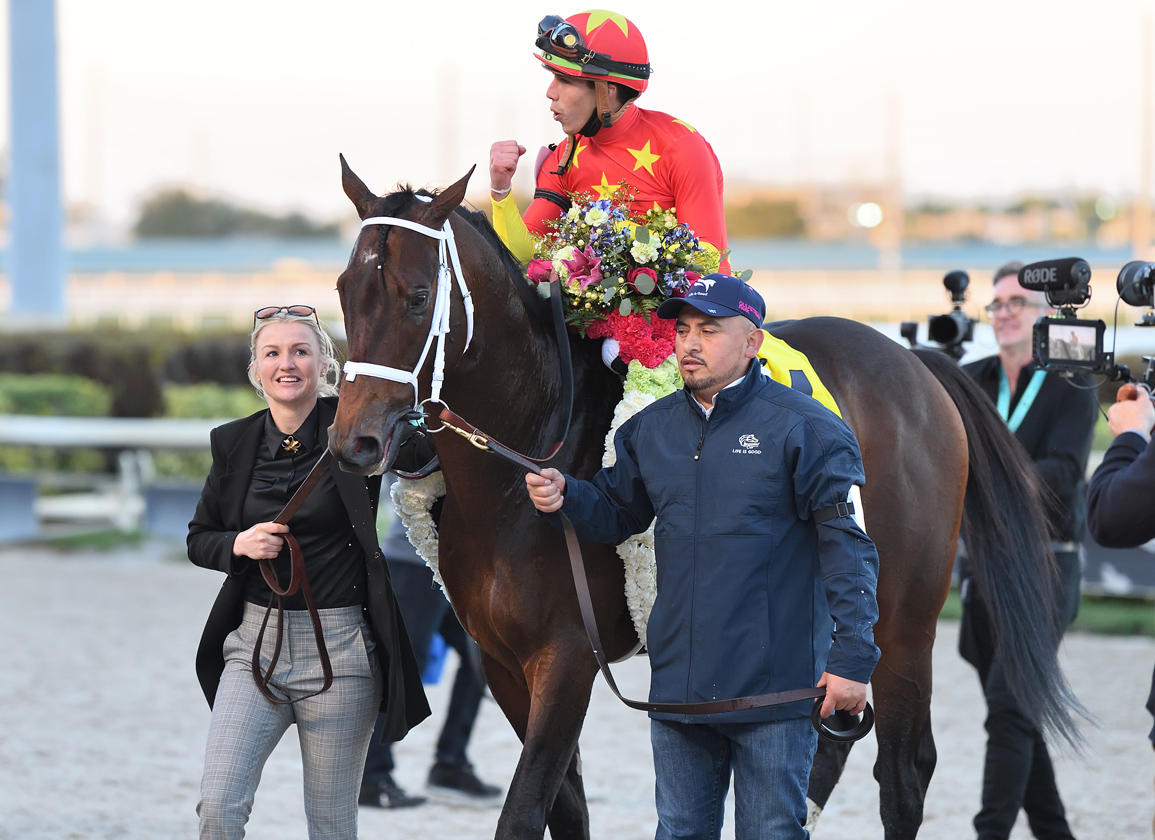 It's not too early to lump Life Is Good (Into Mischief) in with some of the best horses of the modern era. That's how good he was Saturday at Gulfstream when he dominated over a field that included the soon-to-be-named 2021 Horse of the Year Knicks Go (Paynter) in the GI Pegasus World Cup Invitational S. in what was nothing less than a sensational performance.

But is he even the best horse in training?

It's a rare and special time for horse racing, which has been blessed with not just one but two horses who appear to be generational talents who could go down as among the best that ever raced.

The other, of course, is Flightline (Tapit), the fabulously talented but lightly raced $1-million yearling buy whose effortless win in the GI Runhappy Malibu S. drew comparisons to superstars like Ghostzapper (Awesome Again). He was given a 118 Beyer in the Malibu win, better than Life Is Good's best figure, which is the 110 Beyer he picked up in the Pegasus.

Who's better? The debate has already begun, but it's a question that can only be answered on the racetrack. Unfortunately, the two aren't exactly on a collision course to meet.

Flightline returned to the work tab Sunday at Santa Anita. In his first work since Dec. 19, a week before the Malibu, he went four furlongs in 47.80. Afterward, trainer John Sadler told the Daily Racing Form's Jay Privman that Flightline would start next in the Mar. 5 GII San Carlos S. at seven furlongs. The next start after that will likely be the GI Metropolitan H. to be run June 11.

As for Life Is Good, his next start will likely come in the Mar. 26 G1 Dubai World Cup.

“We're going to huddle up this week and discuss it,” said Elliott Walden, the president and CEO of racing operations for WinStar Farm, the co-owner of Life Is Good. “He will not run in the Saudi Cup, back in four weeks. So, Dubai would be the next option. We're going to see how he comes back and then start to map out the whole year.”

So far as the Met Mile goes, Walden wouldn't rule it out, but said that, if Life Is Good is to run in Dubai, that may eliminate the Met Mile from consideration. The next spot that could bring Flightline and Life Is Good together is the GI Whitney S. Sadler has listed that as a possible start for Flightline and Walden said Sunday it is a race that is also under consideration for Life Is Good. If all else fails, there is always the GI Breeders' Cup Classic, a race both stars are pointing toward.

“It would be fabulous if those two were to meet,” Walden said. “It would be great for horse racing. I think it's more a question of when than if. We haven't ducked anybody. We said right after the Dirt Mile what we were planning on doing. We want to do right by our horse and I know John Sadler wants to do right by his horse. He's a tremendous trainer. At some point they will meet and it will be great for racing.”

Life Is Good made his first three starts for trainer Bob Baffert. When Baffert ran into problems with the New York Racing Association, which has been attempting to suspend him, Life Is Good was transferred to Hall of Famer Todd Pletcher.

“I can't think of a horse [I trained] better than him,” Pletcher said following the Pegasus.

“To me, Life Is Good is right up there with Justify,” Walden said. “Justify won the Triple Crown and was undefeated. Bob [Baffert] early on compared him to American Pharoah and Justify. You think about all of the good horses Bob has had and all the good horses Todd has had and it's pretty amazing to think he's in that elite company.”

Walden, a former trainer, sees in Life Is Good characteristics that set him apart from most every other horse.

“The thing that separates Life is Good from the rest of the good horses I've been around is the fact that he never had a bad day,” he said. “Most horses will have an average workout from time to time, even though they are a very good horses, or they might look flat. This horse has never had a bad day on the racetrack. That's something, the more I've been around and the more I see, that is a characteristic of the great ones.”

That Life Is Good, who was the 4-5 favorite under Irad Ortiz, Jr., won was hardly a surprise, but few could have imagined that he could have out-sprinted a horse as quick as Knicks Go and open up by 3 1/2 lengths on his rival. Walden said the plan was to do what it took to get the lead.

“That was the game plan,” Walden said. “I know people say that's hard to fathom that, but this horse was in front of Jackie's Warrior at Saratoga in the Allen Jerkens. Why wouldn't he be in front of Knicks Go? I know Knicks Go is a great horse and is a deserving champion, but I didn't have any doubt he could be up there with Knicks Go. I'm not saying I thought he'd be three or four lengths in front of him, but I never thought he'd take a back seat to his speed, just because of what happened at Saratoga. To be in front of Jackie's Warrior like he was, that showed the speed and athleticism that Life Is Good has.”