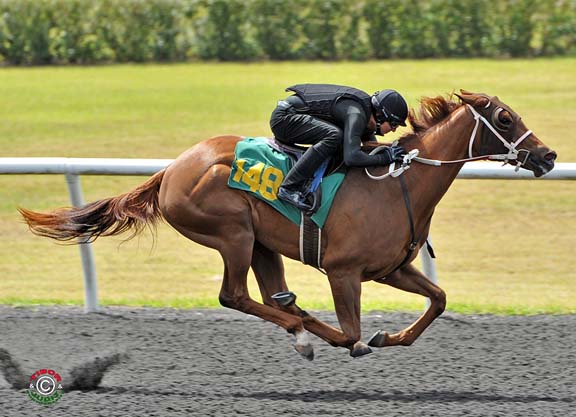 A pair of offspring by the late Wildcat Heir starred during the first session of the under-tack preview of the Ocala Breeders' Sales Company's April Sale of 2-Year-Olds in Training in Florida Monday, with a filly (hip 148) by the stallion earning the furlong bullet time of :9 4/5 and a colt (hip 200) turning in the fastest quarter-mile time of :20 2/5.

Craig Wheeler, co-breeder and consignor of hip 148, admitted his filly's bullet work was no surprise.

“She has been training so well and has always just done everything right,” Wheeler explained. “Of course, you never know if everything is actually going to come together and they'll actually do it. That was what we were hoping for, but you're always pleasantly surprised when it actually happens.”

Wheeler has already had success with the family. He and partner Thomas Groves campaigned the filly's hard-knocking dam Battingstar (Grand Slam), who won 10 of 48 starts and hit the board an additional 14 times while earning $222,211.

“She was one of these racehorses that you just have so much fun racing,” Wheeler recalled. “She won at Saratoga and Bo Derek got in the win photo with us. She won every place we took her. In her last race at Gulfstream, she was headed and fought back and won. She was just one of those mares you love.”

The juvenile filly is Battingstar's second foal. Last year, her colt by Yes It's True also turned in a :9 4/5 work before selling for $45,000. Named True Valor, he has made five trips to the post and was most recently a narrowly beaten runner-up at Keeneland last October and is currently working towards a comeback for owners Wayne Detmar and Keith Desormeaux.

Wheeler, who was longtime manager of Jack Dreyfus's Hobeau Farm, went out on his own after that historic operation dispersed in 2010. He and wife Elizabeth have a broodmare band of some 20 head and breed to sell primarily at the 2-year-old sales. Their 2016 graduates include Pretty Boy Flash (Gone Astray), a narrowly beaten third in last year's GI Hopeful S. who sold for $375,000 at last year's OBS March sale, and multiple stakes winner R Angel Katelyn (High Cotton), who sold for $50,000 at last year's OBS June sale and has now earned $277,120.

“I managed Hobeau Farm for 30 years and when that closed down, we went out on our own,” Wheeler said. “It's harder to survive through the highs and the lows of the economy, but right now the economy is pretty stable and the horse market is pretty good for the middle and upper. We have our own little operation and we have a few loyal trainers who send us their stock to break or lay-up or a couple broodmares here and there. Most of these we are selling [at OBS April] are ours–we have one we're selling for a client and two that I own a piece of–but the rest are mine.”

Wildcat Heir, who was the leading sire in Florida four times, passed away in 2015. Wheeler was one of many in the state's breeding industry to have enjoyed success with the prolific sire.

“I've had great luck with Wildcat Heir,” Wheeler said. “I've probably sold at least $1 million by him over the years. I had one of the first stakes winners by him called Wild Mia, who won numerous stakes and was graded stakes placed. I got her when we were just out on our own and the economy crashed. There is always one horse that kind of saves the day in your memory and she was the one for us. We raced her and she won $320,000 and then we sold her for probably $250,000 and it just gave us that big boost we needed to get through. Losing Wildcat Heir was a big loss to the Florida breeding industry.”

Sergio Centeno's Blue River Bloodstock sent out Wildcat Heir's other bullet worker Monday. Hip 200, who blitzed a quarter in :20 2/5, is out of Business Decision (Put It Back) and from the family of multiple graded stakes placed Foxy Danseur (Mr. Greeley), the dam of recent GIII Fantasy S. winner and 'TDN Rising Star' Ever So Clever (Medaglia d'Oro).

The under-tack show for the OBS April sale continues through Saturday, with sessions beginning daily at 8 a.m. The auction will be held next Tuesday through Friday.