Home » Archive » Shared News » Why, for Baffert, It Was “Just a Great Day”

Why, for Baffert, It Was “Just a Great Day” 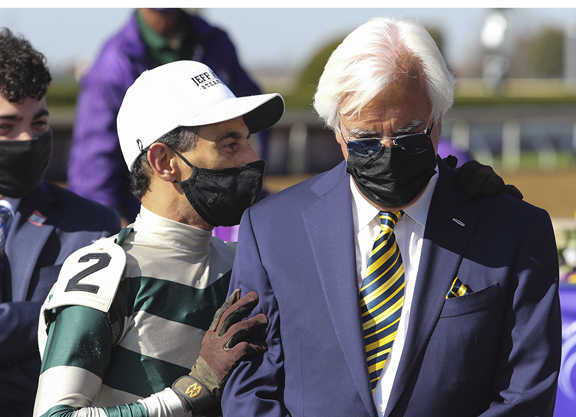 It’s been a difficult few months for Bob Baffert, who acknowledged as much after Authentic (Into Mischief) won the GI Longines Breeders’ Cup Classic and wrapped up the Horse-of-the-Year title on a terrific day of racing at Keeneland. He seemed every bit as relieved as he was excited, enjoying a moment where he could divert his focus from Scopolamine, drug positives out of Oaklawn or the latest hit job from the New York Times. It seemed that a weight had been lifted off his shoulders.

“That was awesome. I tell you what, I needed that, didn’t I?” he asked after the Classic.

There was no denying that Baffert’s problems were a story that hovered over this Breeders’ Cup. The face of racing had been hit with one scandal after another, giving his critics ammunition they ran with in their on-going attempts to label him a cheat. Now, he was front and center in one of the sport’s most visible events.

When Gamine (Into Mischief) won the GI Breeders’ Cup Filly & Mare Sprint, it was still another reminder of Baffert’s problems. Twice this year, she was the subject of medication violations.

“I wanted it bad for her,” Baffert said. “What she’s gone through. She deserved it. Of all my races, this meant the most to me.”

To NBC’s credit, its team didn’t ignore the story and Baffert was called upon to explain to the cameras how and why he had found himself in the middle of such a mess. He said many of the same things he said when issuing a statement earlier in the week when he said, “We can always do better and that is my goal.”

What Gamine and Authentic did was change the narrative, at least for a day. This was about Baffert, the gifted trainer, and not Baffert, the trainer the New York Times suggested this week should be banned from the Breeders’ Cup.

He is the face of racing because when it comes to the major events, he’s just better than everybody else. Yes, his owners provide him with an assembly line of beautifully bred, expensive horses, but they only do so because they know he delivers. Gamine has proven to be one of the fastest fillies he has ever trained. Authentic, a horse who once appeared to have distance limitations, has won the sport’s two most important mile-and-a-quarter events, the Classic and the GI Kentucky Derby. Improbable (City Zip), after winning three straight Grade I’s for Baffert, was second in the Classic.

Tied with Ben Jones for most Derby wins, Baffert has won the race six times. The Classic win was his fifth and the fourth time he has won the race over the last seven years. Those are the types of accomplishments that set him apart.

There were other important stories on this day, including trainer Brad Cox winning two races Saturday, giving him four wins overall at this Breeders’ Cup. Cox’s career has soared over a very short time and he, more so than anyone else, appears ready to be Baffert’s biggest challenger when it comes to superiority in the training ranks. Cox’s Monomoy Girl (Tapizar) could not have been better when winning the GI Longines Breeders’ Cup Distaff for the second time. In 15 career starts, she has crossed the wire first 14 times and is well on her way to the Hall of Fame.

The feel-good story of the day was the win by Whitmore (Pleasantly Perfect) in the GI Breeders’ Cup Sprint. A 7-year-old making his fourth start in the Sprint, his last couple of races weren’t very good, but he delivered when it mattered most.

On the subject of top trainers, Aidan O’Brien finished one-two-three in the GI Breeders’ Cup Mile, somehow figuring out a way to get 73-1 shot Order of Australia (Ire) (Australia {GB}) to cross the wire first. It was a big day for the Europeans, who won every one of the Breeders’ Cup races on the grass. It was a brutally tough day for French jockey Christophe Soumillon, who could not ride because of a positive test for COVID-19. Two of his original mounts won. After going 0-for-19 in the Classic, John Velasquez got the job done, riding Authentic, who was allowed to lope along on the lead in what was a perfect trip and ride.

But, as is so often the case, the spotlight hovered over Baffert for much of the day and shined brightly on the Hall of Famer when he finished one-two in the Classic. By no means has he been accused of the sorts of cheating that Jason Servis and Jorge Navarro have been. It has been alleged that both were part of a sophisticated program to dope their horses with powerful performance-enhancing drugs. Nothing Baffert has been accused of comes even remotely close to putting him in their category.

But he’s also not a Christophe Clement, a Graham Motion, a Bill Mott, a Richard Mandella or any of the top trainers whose careers have largely been devoid of any drug positives or scandals. It’s appropriate to ask questions, even if he is guilty of nothing more than sloppy management of his stable.

The hope now is that this Breeders’ Cup will foreshadow what is to come. For Baffert to be a superstar trainer is good for the sport. For him to wind up in one scandal after another is not. He is right, he needs to do better. Here’s hoping that he will.