Home » Archive » Top News » Whitney Next for Knicks Go, BC Classic a Possibility

Whitney Next for Knicks Go, BC Classic a Possibility 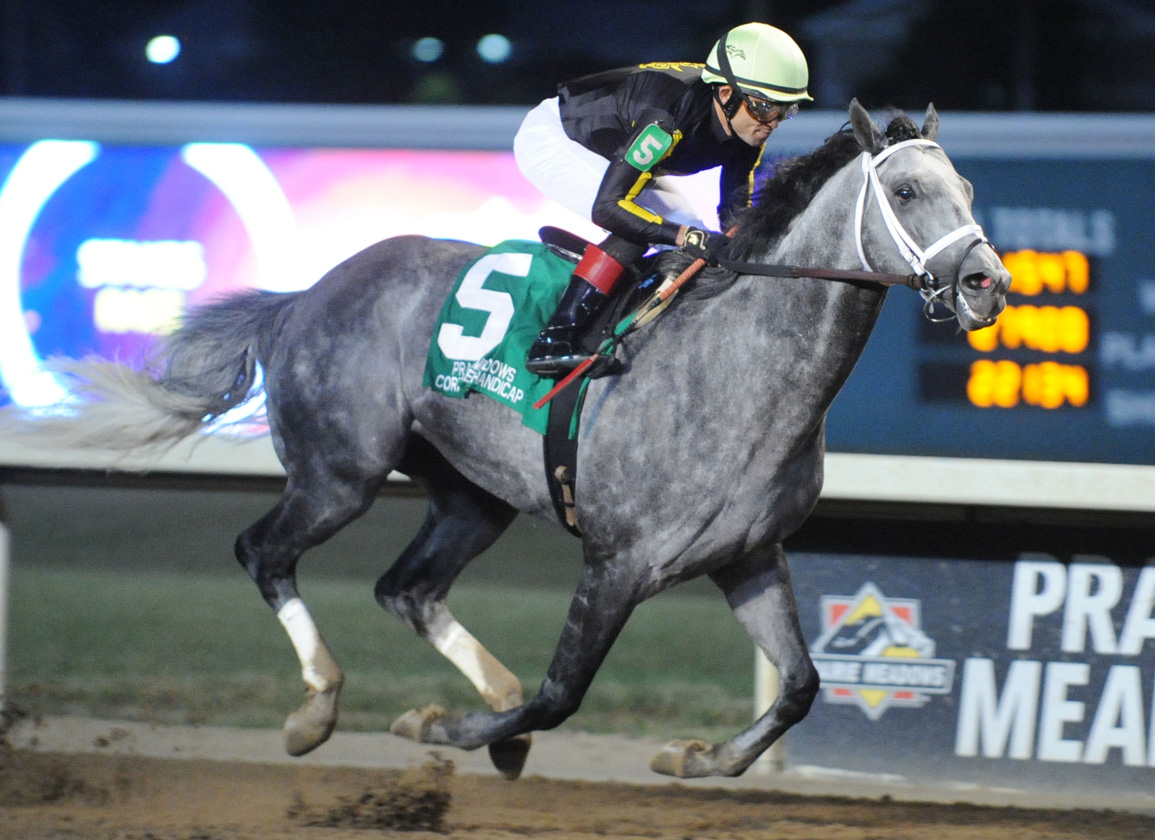 With his horse's year having been rejuvenated with a powerful performance in the GIII Prairie Meadows Cornhusker H., trainer Brad Cox is ready to tackle bigger and better things with stable star Knicks Go (Paynter). Cox said Wednesday that Knicks Go will race next Aug. 7 in Saratoga's GI Whitney S., a 'Win and You're In' to the GI Breeders' Cup Classic.

It's been an up-and-down year for Knicks Go, who kicked things off with a win in the Jan. 24 GI Pegasus World Cup Invitational S. at Gulfstream. But, he wasn't the same horse in his next two starts, finishing fourth in the $20-million Saudi Cup and fourth again the GI Metropolitan H. Looking back, Cox doesn't think either race was the best fit for his horse.

Coming back in a month after the Met, Knicks Go took a drop in class when showing up Friday in the Cornhusker, which is worth $300,000 and doesn't ordinarily attract the highest tier horses. While he may not have faced the best competition, Knicks Go could not have been any more impressive. He won by 10 1/4 lengths and earned a 113 Beyer figure, which represents the best figure run by any horse this year.

“It's always great to run in Grade I's and it's great to have horses that are Grade I horses,” Cox said. “He's a Grade I horse. But I do think a race like this one can give the horse confidence and fitness without really getting to the bottom of them. It was a nice race going a mile-and-an-eighth and I think it, being five weeks out, was a nice set up for the Whitney. A race like that can do a lot for a horse. He's a sound, happy horse and we witnessed that last Friday.”

Should Knicks Go stay on course in the Whitney, Cox and his owners will have some tough choices to make. Knicks Go won last year's Big Ass Fans GI Breeders' Cup Dirt Mile and a return to that race would appear to be in his sweet spot. But Cox has come to believe that Knicks Go can get the job done at a mile-and-a-quarter and is open to the possibility of starting Knicks Go in the GI Breeders' Cup Classic at Del Mar, a richer more prestigious race than the Dirt Mile. He has never run in a 10-furlong race.

“With the way he ran Friday and the configuration of Del Mar, the Classic is definitely in play,” he said. “Both Breeders' Cup races are in play. At Del Mar, we think a mile-and-a-quarter is something he can handle. I think he's a horse that benefits from a shorter stretch. Keeneland has a short stretch when you run a mile there. Gulfstream has a bit of a shorter stretch. There was a shorter stretch the other night at Prairie Meadows and Del Mar doesn't have a long stretch. Those are things we've picked up on over the last year that seem to benefit him.

“He's a horse that doesn't slow down around the turns and that's where he seems to win his races, on the far turn. He can get away from other horses there.  And they have to work around the turns to keep up with him. Obviously, with his running style, he saves all the ground around both turns. He's very fast and is able to establish himself early on in a race and save all the ground. He establishes the kind of lead where he is hard to run down.”

As for another big name in the Cox barn, the trainer has no firm plans for two-time Eclipse Award winner Monomoy Girl (Tapizar). She has not started since finishing second in the

GI Apple Blossom H. April 17. Afterward she came down with a case of muscle soreness and was sent to WinStar Farm to recuperate.

“She's back in training at WinStar and she is doing great,” Cox said. “There's no real time frame set so far as to when she will come back to us. But we're all very happy with the progress she has made over the last two months.”

When asked if Monomoy Girl would be ready in time for a fall prep for the GI Breeders' Cup Distaff, Cox replied: “I don't want to put the cart before the horse, but that's possible. That would be if everything goes right.”