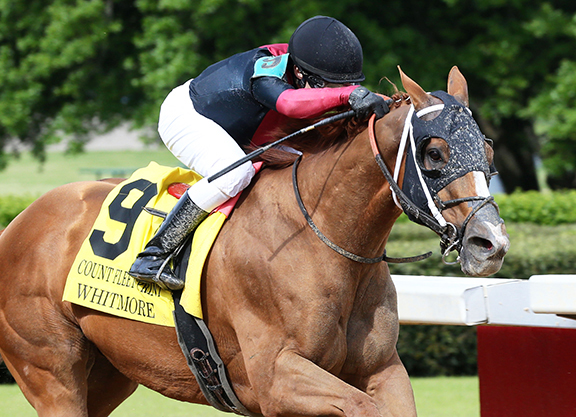 In 13 previous trips to the races at Oaklawn Park, Whitmore (Pleasantly Perfect) had never finished out of the top three, including a third-place effort to future GI Belmont S. hero Creator (Tapit) in the GI Arkansas Derby some four Aprils ago. Since reinvented as a top sprinter–not entirely shocking given that he won his first seven starts going one turn–the popular 7-year-old made history Saturday in Hot Springs, withstanding a run from last by Flagstaff (Speightstown) to land the GIII Count Fleet Sprint H. for the third time in four years. His lone defeat in the race came at the hooves of a buzzsaw future Eclipse Award winner named Mitole (Eskendereya) 12 months back.

Drawn nine in a Grade I-quality field, Whitmore hit the ground running and settled in about sixth position, but reasonably handy to the pace, disputed by the fleet-footed Bobby's Wicked One (Speightstown) underneath Share the Upside (Maclean's Music), who lowered Whitmore's colors in the King Cotton S. on each horse's seasonal debut Feb. 8. 'TDN Rising Star' Hidden Scroll (Hard Spun), making his return to graded company, chased the dueling leaders three deep through enervating fractions and was in position to have the first crack at Share the Upside at the quarter pole, as Bobby's Wicked One was one of the first beaten. The half-mile was up in a taxing :44.67, but Whitmore rolled up three wide into the lane with a couple of right-handers to his hind quarters, was firmly in front passing the eighth pole and held the fast-finishing Flagstaff safe. Manny Wah (Will Take Charge) skimmed the rail and was just outfinished for the place spot.

“I'm proud for him,” said winning trainer Ron Moquett. “I'm noticing lately people saying, 'The great' and 'legendary.' People that are saying that don't throw around those words. To me, he's been that. But it's so cool to see this horse that has so many people that love him and follow him to be able to do what he does and to make a lot of people that happy.”

The conditioner added, “I wanted him to be on the inside, but he broke so well that he [jockey] Joe [Talamo] had him in a position to where he could…and Whitmore's always going to argue with whatever you want. He just has that personality. He argues all the time. He has tried to get out. Sometimes, he tries to get in. But, he really just wants to mess with the rider. The jockey just took a hold and let him do what he wanted to do. Then, whenever you ask him, he did what he's supposed to do. It was so awesome.”

A very good third to Mitole in the GI Breeders' Cup Sprint last November, Whitmore stretched out for the GI Cigar Mile H. Dec. 7, but was a no-factor seventh to Maximum Security (New Year's Day). He resumed for the first time in his career in the King Cotton before besting Mr. Jagermeister (Atta Boy Roy) to win the Hot Springs S. for the fourth straight season Mar. 7.

Pedigree Notes:
Whitmore is the most accomplished runner for his GI Breeders' Cup- and G1 Dubai World Cup-winning sire, a $725,000 graduate of the 1999 Keeneland September sale who stood at Lane's End from 2005 through 2014 before being sold to Turkey to continue his stallion career. From two crops to race in that country, he is the sire of 25 winners, two at stakes level. Melody's Spirit is the dam of a juvenile colt by Liam's Map who cost $190,000 at KEESEP last fall and a yearling colt by Arrogate. She was most recently bred to Uncle Mo.