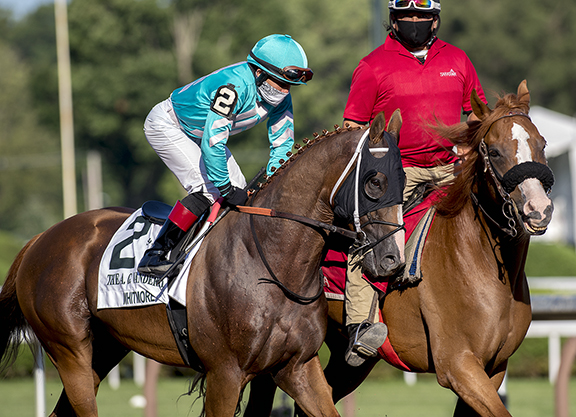 The hard-knocking Whitmore (Pleasantly Perfect) captured the 2018 GI Forego S. and, after missing last year's Saratoga meet, he looks to take home the trophy again in this year's renewal Saturday. Runner-up in the King Cotton S. at the start of this term Feb. 8, the chestnut captured the Hot Springs S. Mar. 7 and followed suit with a win in the GIII Count Fleet Sprint H. Apr. 18. He completed the exacta behind Volatile (Violence) in this venue's GI Alfred G. Vanderbilt S. last time July 25.

“Pace makes the race as we've seen in a lot of these races,” said trainer Ron Moquett. “He's always good enough to make a big difference but you want him to do it without being put at a disadvantage.”

Firenze Fire, whose lone top-level victory came during his juvenile campaign, captured the GIII General George S. at Laurel in his final start for Jason Servis prior to that conditioner's arrest as part of a federal indictment for horse doping. Transferred to Kelly Breen, the homebred was fourth in the Carter, but returned to the winner's circle at Belmont in the June 27 GII True North S.

A Grade I winner at two in the Champagne S., 'TDN Rising Star' Complexity (Maclean's Music) romped in an Aqueduct optional claimer in November and was fourth to Omaha Beach (War Front) next out in the GI Malibu S. at Santa Anita Dec. 28. Subsequently shelved, the bay made a victorious return in a one-mile event at Belmont July 2.