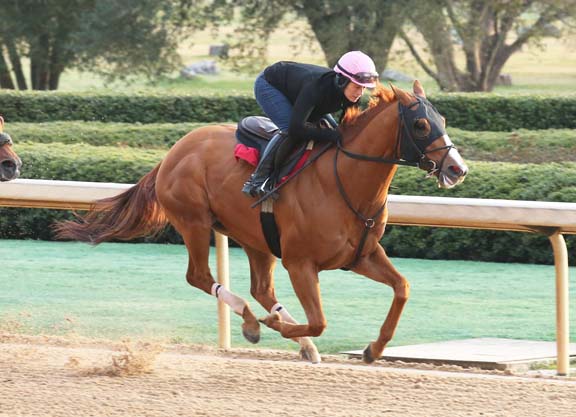 Trainer Ron Moquette has been here before. In 2015, he saddled GIII Southwest S. winner Far Right (Notional) to a second-place finish in the GI Arkansas Derby behind the fleet-footed American Pharoah (Pioneerof the Nile). This year he has another promising sophomore in the form of the MGSP Whitmore (Pleasantly Perfect), set to contest the Hot Springs fixture for the home team, while squaring off with another Bob Baffert-trained contender in Cupid (Tapit). Racing for Robert LaPenta, Harry Rosenblum and Moquette, the chestnut gelding is a regular workmate of Far Right.

“I would argue that this is actually Baffert's home field advantage on the recent results of all the big races,” laughed Moquette on the NTRA teleconference Tuesday. “I live here and train here and we're not going to have to ship, but I think some of these guys bringing in these horses–whether they are stabled here or not–know how to get the wins for the bigger races, as a result of looking at the past performances.”

Moquette has been pleased with Whitmore's recent efforts. The gelding raced to runner-up efforts in the GIII Southwest S. and GII Rebel S. and will once again have the services of Irad Ortiz, Jr., who first rode Whitmore in the Rebel S., Saturday.

“I knew that we still had a very good horse in front of us [Cupid], who was able to control the pace after the first quarter and it would be kind of hard if he had very much left in him and he did,” Moquette recalled of the Rebel. “He ran well and you know, neither horse backed up, but [Cupid] had more in his tank that day. Whitmore will be used to the way that Irad asks and Irad will know what he has to ask. I believe familiarity breeds success.”

Purchased from breeder John Liviakis, Whitmore gave every indication that he would be a force to be reckoned with in the afternoons, and vindicated Moquette's belief, romping by

7 1/4 lengths beneath the Twin Spires at first asking Nov. 6.

“I knew that if the heart was going to show up like the talent did in the morning, we were going to have a lot of fun,” Moquette said. “It was interesting, we hang out in the trainer's stand and on a day like that, everyone has a good horse on a maiden special weight day.”

“When I got this horse, I decided that he was a freak athlete and he looked like everything he did was easy and he was good at it,” reminisced Moquette. “I thought to myself, that reminds me of Wilbur Whitmore. He's a natural athlete, a good guy and I was a good friend of his and his brother's in high school. I told him, 'I want to name a horse after you. I bet you this horse makes it to the GI Kentucky Derby and I'm going to make you famous.' He started laughing, and I just think that it's pretty cool that there is an actual possibility that this horse goes to the Kentucky Derby and makes Wilbur Whitmore proud.”

Moquette remains confident in his charge, even though making it to the Kentucky Derby is a tall order.

“He's a beast,” Moquette said. “I'm excited about my horse. I'm excited for my partners and myself and I'm excited to have a horse this nice in a race this cool. I just want a good post position, a good trip and let's see who has the best horse.”

“He's learning,” Moquette said. “I don't drill my horses as hard as a lot of the guys you know, that I compete against. A lot of times that bites me. But a lot of times, I use a race to point to another race. I know for a fact there is going to be a race on Apr. 16, it's my ultimate goal. You have to have them as ready as you can have them without going overboard. I would say I have him exactly where I want him for this race. It took the last race to do it.”

Baffert is looking for his third Arkansas Derby victory with Cupid, but Moquette is undaunted.

“Mr. Baffert knows how to get the job done and I promise you Cupid will come with his A-game,” Moquette said. “The other 12 or so, however, will be shooting for the same thing. We just have to hope that our experience will help us in this race. Thank goodness for the owners of Far Right and for Far Right for getting me to have that experience. Hopefully it pushes Whitmore even further.”