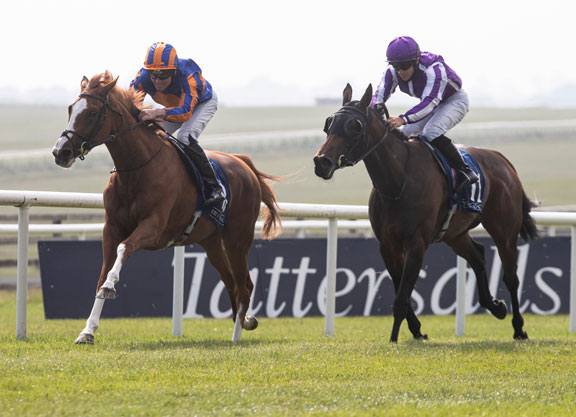 At 1.2-million gns, Snow was the most expensive auction purchase in this lineup | Racing Post

CAYENNE PEPPER (IRE) (Australia {GB}-Muwakaba, by Elusive Quality)
Bred by G H S Bloodstock & J C Bloodstock, Cayenne Pepper was offered by Bumble Mitchell as a foal at Tattersalls December, where she was selected by Harriet Jellet for Jon Kelly for 195,000gns. Last year's G3 Flame Of Tara S. winner now races in the colours of Kelly's wife Sarah. Cayenne Pepper is inbred 4×3 to Allegretta, her third dam Saleela (Nureyev) being a half-sister to Urban Sea and King's Best.

LABURNUM (IRE) (Galileo {Ire}-Secret Garden {Ire}, by Danehill)
Second to Even So in the Naas Oaks Trial, Laburnum was bred by Swettenham Stud and races for the Coolmore triumvirate. The 11th foal out of the listed-winning Secret Garden (Ire) (Danehill), she is a full-sister to G1 Irish 2000 Guineas winner Roderic O'Connor (Ire) and Listed Salsabil S. scorer Dazzling (Ire). Secret Garden has been mated exclusively with Galileo since 2008 and she has a yearling filly.

NEW YORK GIRL (IRE) (New Approach {Ire}-Annee Lumiere {Ire}, by Giant's Causeway)
Bred by P F & Peter Kelly, New York Girl was selected by Cathy Grassick for 32,000gns as a Tattersalls December Foal from the Ballybin Stud consignment and now carries the colours of Healthy Wood Co Ltd. New York Girl is out of the French listed-placed Annee Lumiere, who is a half-sister to the dam of the talented American mare More Chocolate (Malibu Moon).

PASSION (IRE) (Galileo {Ire}-Dialafara (Fr), by Anabaa)
Bred by Lynch Bages and Camas Park Stud, Passion was hammered down for 800,000gns at Book 1 of the Tattersalls October Yearling Sale to SackvilleDonald and now races for the Coolmore partners. The winner of one of her six starts, Passion is a full-sister to G1 Irish Derby and G1 St Leger victor Capri (Ire) and G3 Loughbrown S. scorer Cypress Creek (Ire). The dam, Dialafara, was bought for €175,000 from Arqana December in 2010, the ticket signed by Mags O'Toole.

YAXENI (FR) (Maxios {GB}-Kithonia {Fr}, by Sadler's Wells)
SBA Racing's Yaxeni was bred by the Niarchos Family and sold through Norelands Stud to Gaelic Bloodstock as a yearling for €8,000 at Goffs February. Her listed-placed dam is out of a half-sister to G1 Prix du Jockey Club winner Hernando (Fr) (Niniski) and G1 Prix Lupin victor Johann Quatz (Fr) (Sadler's Wells).