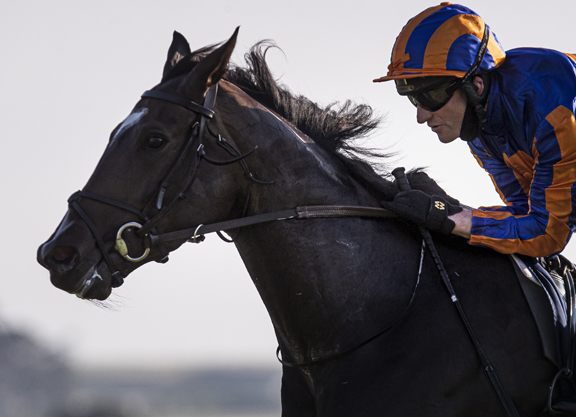 The dual winner Dawn Intello, who makes the jump to pattern company here, was offered by Montaigu at Arqana's October Yearling Sale in 2018, where he was picked up by Rabbah on behalf of Jaber Abdullah for €57,000. The unplaced dam is a daughter of the G1 Prix Marcel Boussac heroine Sulk (Ire) (Selkirk), the half-sister to American champion and dual Grade I winner Dank (GB) (Dansili {GB}). B-V Timoshenko

The last-out G2 Prix Greffulhe winner Gold Trip carries the colours of Ecurie Jean-Louis Bouchard and was a €60,000 Arqana August yearling bought by SAS Larrieu Gerard from the Grandcamp consignment. He is a half to the listed-placed Got Wind (GB) (Olympic Glory {Ire}) and the dam is a half-sister to the G3 Prix Lieurey victress and multiple Group 1-placed Sarkiyla (Fr) (Oasis Dream {GB}). B-M Monfort

Bred by Ecurie De La Vallee Martigny and campaigned by that entity in partnership with Ecurie Des Mouettes, Chachnak is out of the G2 Prix Daniel Wildenstein victress Tamazirte, who was second in both the G1 Prix de Diane and G1 Poule d'Essai des Pouliches. Tamazirte has also left Into The Mystic (Ire) (Galileo {Ire}), a listed winner in Canada.

The Listed Newmarket S. winner Mishriff is a Prince Faisal product through and through; not only did he race the Classic-winning sire, but he bred the first three dams of Mishriff. The third dam is none other than the blue hen Rafha (GB) (Kris {GB}), out of whom Prince Faisal bred Invincible Spirit (Ire) and Kodiac (GB). It is also the family of the G1 Gran Criterium winner Nayarra (Ire) (Cape Cross {Ire}) and her G2 Superlative S.-winning brother Gustav Klimt (Ire) (Galileo {Ire}), as well as G1 Pretty Polly S. victress Chinese White (Ire) (Dalakhani {Ire}).

Godolphin homebred Victor Ludorum will attempt to emulate his sire with a Classic double in the G1 Poule d'Essai des Poulains and G1 Prix du Jockey Club. He is the fourth foal out of his dam, who two years prior produced the listed-winning G1 Irish Oaks third Mary Tudor (Ire) (Dawn Approach {Ire}) and who has a 2-year-old by New Approach (Ire) named Ages Of Man (Ire) and a yearling filly by Invincible Spirit (Ire). Victor Ludorum is inbred 3×3 to the excellent producer Helen Street (GB) (Troy {GB}) who, in addition to producing the dam of Shamardal, has also left the multiple Group 1-winning champion sire Street Cry (Ire).

Riviera Equine and Ecurie De Montlahuc partnered with breeder Haras d'Etreham on Pisanello after he was led out unsold at €60,000 at Arqana August. The Mar. 15 Listed Prix Omnium winner is a grandson of Zelding (Ire) (Warning {GB}), the G3 Prix du Bois winner whose daughter Beauty Is Truth (Ire) (Pivotal {GB}) has produced Group 1 winners The United States (Ire), Hydrangea (Ire) and Hermosa (Ire), all by Galileo (Ire).

Celtic Art was bred by Peter Anastasiou and now carries the colours of Fitri Hay. The Goodwood maiden winner was bought by co-trainer Paul Cole for €45,000 as a yearling at Arqana October and is a grandson of the G3 Prix de la Grotte winner Irish Order (Irish River {Fr}), who is a half-sister to four stakes winners including G1 2000 Guineas victor Entrepreneur (GB) and G1 Coronation S. winner Exclusive (GB).

Bred by Jedburgh Stud, The Summit was bought by Paul Nataf for €16,000 at Arqana October. He raced for Mrs Jacques Cygler through his May 11 victory in the G3 Prix de Fontainbleau and his second in the Poulains on June 1, and he makes his first start on Sunday in the colours of Lily Chan Li Lei and Marc Chan. The Summit is a half to the listed-placed One One One (Fr) (Le Havre {Ire}).

Last year's Listed Star Appeal S. winner Fort Myers is the second foal out of the G1 Irish 1000 Guineas scorer Marvellous, who is herself a full-sister to dual Guineas winner Gleneagles (Ire), dual Group 1-winning juvenile Happily (Ire) and two other stakes winners. Marvellous had a 2-year-old full-brother to Fort Myers who sadly died, but she has a yearling filly by Quality Road and was bred to Justify for 2020. Fort Myers races as a homebred for the Coolmore partners.

Bred in Kentucky by the Parrish Family's Indian Creek, Ocean Atlantique was a $275,000 yearling purchase by Brendan Holland of Grove Stud who blossomed into a €1.1-million Arqana May purchase by Laurent Benoit's Broadhurst Agency on behalf of the Coolmore partners. The last-out five-length Listed Prix de Suresnes winner is out of the unraced Tare Green, who is a half-sister to American turf champion and late sire Leroidesanimaux (Brz). The third dam, Kerali (GB), supplied Juddmonte's incredible five-time Group/Grade I producer Hasili (Ire).

Annemarie O'Brien bred Order Of Australia and races him in partnership with the Coolmore triumvirate. The three-times raced maiden who was fourth in the G1 Irish Derby is a three-quarter brother to Iridessa (Ire) (Ruler of the World {Ire}), the winner of four Group 1s at two and three. Their unraced dam Senta's Dream is out of Starine (Fr) (Mendocino) who, like Iridessa, won the GI Breeders' Cup Filly & Mare Turf.

The unbeaten conditions race winner Hurricane Dream is raced by Team Valor International and Andre Brakha, the latter having co-bred the colt with Mrs. Marie-Laurence Oget. There are no stakes winners under the first four dams.

The Wertheimer homebred Ecrivain is out of the G3 Derrinstown Stud One Thousand Guineas Trial third Sapphire Pendant, and therefore a half-brother to the listed-placed Starifique (Ire) (Sea The Stars {Ire}). Wertheimer et Frere bought Sapphire Pendant for 480,000gns from Tattersalls December in 2012, and she is a granddaughter of the GI Kentucky Oaks winner and outstanding producer Blush With Pride, so therefore connected to the likes of champions Rags To Riches (A.P. Indy) and Peeping Fawn (Danehill).

The Wertheimer brothers swooped for Pao Alto–a son of their homebred winner of this race, Intello-for €160,000 at Arqana August. The chestnut, who conquered Ocean Atlantique in the G3 Prix la Force on May 14, is out of the German Group 3 winner Peaceful Love. B-La Motteraye Earl & G-L Ferron

A first Classic runner for the former Haras du Logis sire Masterstroke–a son of Monsun (Ger) from the family of Galileo (Ire) and Sea The Stars (Ire)–Miss Extra has enjoyed an unbeaten 3-year-old-campaign to date since switching to the Chantilly stable of Pia Brandt following her purchase over the winter by Alain Jathiere and Ecurie du Parc Monceau from her breeder Sophie Boulin Redouly. She won a ParisLongchamp handicap on the day racing resumed in France, followed by the Listed Prix des Lilas and then the G2 Prix de Sandringham. These wins have all come at a mile but the step up in trip should be within her capabilities.

One of two runners for Jean-Claude Rouget, this Aga Khan homebred's two wins have both come in the provinces and she was runner-up at Chantilly in the Listed Prix Finlande over nine furlongs. Her dam is a half-sister to the G2 Prix du Conseil de Paris winner Vadamar (Fr) ((Dalakhani {Ire}) from a family which includes the G1 Prix Saint-Alary winner Vazira (Fr) (Sea The Stars {Ire}).

The Aga Khan's second runner in the race and carrying the red sash, Ebaiyra broke her maiden in the G3 Prix du Royaumont on June 10 over a mile and a half for Alain de Royer-Dupre. She is a half-sister to the listed winner Edisa (Kitten's Joy) who won the Jockey Club Oaks at Belmont. It is a family not short on stamina which includes the Gold Cup winners Enzeli (Ire) and Estimate (Ire).

Another Rouget representative, this Shadwell homebred has run twice and won twice, most recently landing the listed Prix de la Seine over a mile and three furlongs. Her dam was unraced but is a daughter of Sheikh Hamdan's 2005 Oaks winner Eswarah (GB) (Unfuwain).

Bred by Haras Saint-James, Mageva was bought at the Arqana August Sale for €75,000 by Hubert Guy, in whose colours she raced initially before switching to the ownership of long-term Fabrice Chappet patron Antoine Gilibert. A winner on debut as a juvenile, she was only narrowly beaten when runner-up in the Listed Prix du Pont Neuf in May and subsequently took third in the Poule d'Essai des Pouliches. She is the first foal of her dam, who is herself out of the Aga Khan-bred Liwana (Ire) from the family of Group 1 winners Linngari (Ire) and Mont Ormel (Fr).

Among the three runners for Fabrice Chappet, this daughter of the G1 Nunthorpe S. winner Margot Did was bred by Katsumi Yoshida and was unsold at €850,000 at the Arqana August Sale as a yearling. Now racing in the colours of Roy Jackson's Lael Stable, she won the G3 Prix Vanteaux over nine furlongs on her seasonal resumption and was five lengths behind Tawkeel (Ire) when runner-up in the G1 Coolmore Prix Saint-Alary on June 14.

A Coolmore homebred and unbeaten at two starts as a juvenile, she was beaten two lengths in the Irish 1000 Guineas by stablemate Peaceful (Ire) whom she reopposes here. Over the winter Fancy Blue switched from the stable of Aidan O'Brien to his son Donnacha O'Brien. Plenty of middle-distance class in the family; her dam is a sister to the brilliant High Chaparral (Ire).

The Irish 2000 Guineas winner was also a winner over a mile at two and is another Coolmore homebred. She is a sister to the listed winner and Group 3-placed Easter (Ire) out is of a dual listed-winning sprinter.

She became the first Group 1 winner for her sire in the Coronation S. at Royal Ascot, one of four Group 1 races also won by her half-sister Alpha Centauri (Ire) (Mastercraftsman {Ire}). The family's bold Classic claims continue through this filly's grandam East Of The Moon, a Prix de Diane winner herself and daughter of the great Miesque.

Beat her stablemate Mageva when second to Dream And Do (Fr) in the Poule d'Essai des Pouliches and won over a mile in heavy ground as a juvenile. She was bought as a yearling by her trainer Fabrice Chappet for €62,000 at the Arqana October Sale and races in the colours of Rashit Shaykhutdinov. Speak Of The Devil's half-brother is the triple Group 3 winner and fellow soft ground runner Morando (Fr) (Kendargent {Fr}).

The Le Havre-Galileo cross has already been represented in this race by the 2016 winner La Cressonniere (Fr) and the Wertheimer homebred Solsticia has tuned up this season with a 10-furlong win at Chantilly followed by a third-place finish in the G1 Coolmore Prix Saint-Alary, finishing a head behind Magic Attitude. Her dam, a winner over a mile and a half, is a half-sister to G2 Prix du Muguet winner Plumatic (GB) (Dubawi {Ire}).