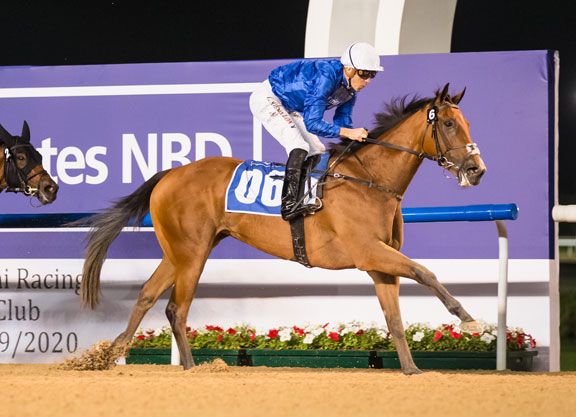 BOOMER (GB) (Kingman {GB}-Wall Of Sound {GB}, by Singspiel {Ire})
A homebred for Andrew Black's Chasemore Farm, Boomer is out of the GII Goldikova S. third Wall Of Sound, who is a half-sister to the G3 John Of Gaunt S. winner The Cheka (Ire) (Xaar {GB}). The dual Group 1-winning sprinter Regal Parade (GB) (Pivotal {GB}) appears under the third dam, while further back the family includes the Juddmonte luminaries Zafonic (Gone West), Zamindar (Gone West) and Reams Of Verse (Nureyev) as well as Sheikh Hamdan's Elmaamul (Diesis {GB}).

LES HOGUES (IRE) (Bated Breath {GB}-Hatsepsut Queen {Fr}, by Peintre Celebre)
Another bargain yearling find by Jean-Claude Rouget at €30,000, the listed-winning Les Hogues started out in the colours of Gerard Augustin-Normand but was sold to FTP Equine Holdings in a private transaction for €200,000 after going through the ring at Arqana's Arc Sale in October. She makes her first start for trainer George Baker on Sunday.

LOVE (IRE) (Galileo {Ire}-Pikaboo {GB}, by Pivotal {GB})
Love races as a homebred for the Coolmore partners, and being out of the Pivotal mare Pikaboo she is therefore a half-sister to the dual group-winning juvenile Lucky Kristale (GB) (Lucky Story) and a full-sister to the Group 3-winning pair Peach Tree (Ire) and Flattering (Ire).

QUADRILATERAL (GB) (Frankel {GB}-Nimble Thimble, by Mizzen Mast)
Champion 2-year-old filly Quadrilateral is a fourth generation homebred for Khalid Abdullah; her fourth dam, Sookera (Sir Ivor), was among the very first mares purchased by the great owner/breeder when he began building his empire in the late 1970s, and she blessed him with Kerali (GB) (High Line {GB}), best known for producing his great blue hen mare Hasili (Ire). Quadrilateral's second dam, Skiable (Ire) (Niniski), is a half-sister to Hasili, and she has provided Juddmonte with the ascending producer Nimble Thimble, who is also responsible for the listed-placed Boardman (GB) (Kingman {GB}) from four foals to race. Nimble Thimble has a 2-year-old full-sister to Quadrilateral named Quilted (GB) and a yearling colt by Kingman.

ROMSEY (GB) (Mukhadram {GB}-Broadlands {GB}, by Kheleyf)
Bred by The Lavington Stud, Romsey was led out unsold at 800gns during Book 3 of Tattersalls October in 2018. A listed winner in Germany and Group 2-placed in Italy last term, she has already outrun the expectations imposed by the market, and some pointers in her pedigree suggest longer trips may suit. Her unraced dam is a half to the 1 3/4-mile listed winner Twitch (Ire) (Azamour {Ire}), while the Grade/Group 1-winning middle distance performers Comic Strip (GB) (Marju {Ire}) and Laughing (Ire) (Dansili {GB}) appear under the third dam.

ROSE OF KILDARE (IRE) (Make Believe {GB}-Cruck Realta {GB}, by Sixties Icon {GB})
The hard-knocking Rose Of Kildare has already earned the honour of bargain purchase of this lineup. Picked out by trainer Mark Johnston for just €3,000 from Oghill House Stud at the Tattersalls Ireland September yearling sale, the Wansdyke Farms-bred filly made 12 starts last year for five wins, including the G3 Firth of Clyde S. and G3 Oh So Sharp S. Despite that modest price tag she has a decent page to back her up, being the second foal of the Listed Ballymacoll Stud S. victress Cruck Realta (GB) (Sixties Icon {GB}). That mare was given a mating to Kingman the year after producing Rose Of Kildare that resulted in a colt, and she has a yearling full-brother to Rose Of Kildare to follow.

SHIMMERING (IRE) (Lope De Vega {Ire}-Crysdal {GB}, by Dalakhani {Ire})
As a homebred for Watership Down Stud, it should not come as a surprise that Shimmering boasts a power-packed page. She is the second foal out of Crysdal, who was unplaced on the racecourse but earned her chance at stud as a daughter of the G1 Fillies' Mile winner Crystal Music (Nureyev), who is in turn a sibling to group winners Dubai Success (GB) (Sadler's Wells), State Crystal (Ire) (High Estate {Ire}) and Solar Crystal (Ire) (Alzao). Also appearing under the third dam is Al Shaqab's G1 Prix Jean Prat victor Zelzal (Fr) (Sea The Stars {Ire}), and Watership Down has taken advantage of a similar mating having sent Crysdal to Sea The Stars in 2018 and 2019 for a filly and a colt, respectively.

SUMMER ROMANCE (IRE) (Kingman {GB}-Serena's Storm {Ire}, by Statue Of Liberty)
Bred by the Donworth Family's Roundhill Stud, Summer Romance was signed for by Oceanic Bloodstock for 300,000gns at Tattersalls October Book 1 before winding up in the Mocklershill draft at Arqana's breeze-up sale last May. She proved a prolific pinhook when, at €800,000 to Godolphin, she became the highest-priced filly of the sale. The Donworth's purchased the filly's second dam Princess Serena (Unbridled's Song) for $150,000 at Keeneland November in 2003. Knocked down to John Quinn for €30,000 at the Goffs Millions sale in 2006, Princess Serena's daughter Serena's Storm (Ire) in fact raced for the Donworths and though she won just once in nine outings she has already carved a more promising path as a broodmare, having produced the G1 Coronation S., G1 Moyglare Stud S. and G2 Queen Mary S. victress Rizeena (Ire) (Iffraaj {GB}) prior to the listed-winning Summer Romance. Princess Serena, meanwhile, has also proven a very shrewd investment, having also left behind the G1 Prix d'Ispahan winner Zabeel Prince (Ire) (Lope De Vega {Ire}), multiple Australian group winner Puissance De Lune (Ire) (Shamardal) and the listed-winning filly Queen Power (Ire) (Shamardal), who was second in the G2 Dahlia S. at Newmarket on Saturday. The family traces to the great American race mare and top-class producer Serena's Song (Rahy).

UNDER THE STARS (IRE) (Night Of Thunder {Ire}-Jumeirah Palm Star {GB}, by Invincible Spirit {Ire})
Breeder Rabbah Bloodstock sent Under The Stars through the ring at Tattersalls October Book 3 under the Houghton Bloodstock banner, but took her home for 6,000gns. She now races in the same Saeed Manana colours that her sire won the 2014 G1 2000 Guineas in. Rabbah had purchased the dam Jumeirah Palm Star for 72,000gns as a yearling in 2010 but let her go for just €1,000 at Goffs November when Under The Stars was a yearling. The two-time winner was bought on that occasion by Paragon Bloodstock.

YES ALWAYS (IRE) (No Nay Never-Flavia Tatiana {Ire}, by Holy Roman Emperor {Ire})
Yes Always was bred by Annemarie O'Brien's Whisperview Trading and selected by Jill Lamb Bloodstock for €17,000 out of The Castlebridge Consignment's draft as a yearling at Goffs February. She was worth considerably more than that eight months later when put through the ring at Tattersalls October Book 3 by Jamie Railton, realising 80,000gns from Katie Walsh's Greenhills Farm. She proceeded to double that price when picked up by Cool Silk Partnership and Stroud Coleman Bloodstock for 160,000gns from the Craven breeze-up last April. Yes Always is a half-sister to the G3 Brownstown S. third Damselfly (Ire) and it is the family of the G1 Dewhurst S. winner Beethoven (Ire) (Oratorio {Ire}). The mare has a 2-year-old colt by The Last Lion (Ire) and a yearling son of Slade Power (Ire).