When the Standardbreds Instituted Breeding Limits and What Happened 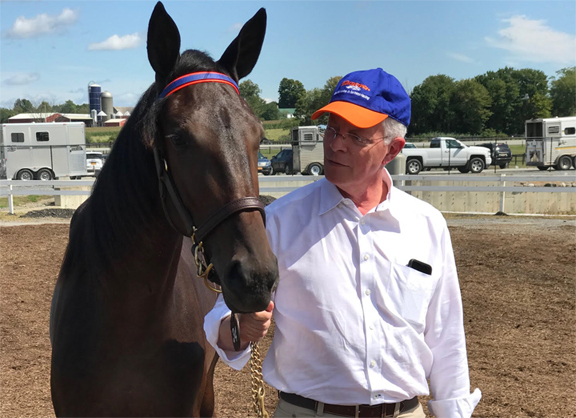 The Week in Review, Bill Finley

When The Jockey Club proposed last week a limit to the numbers of mares a stallion could be bred to, Russell Williams, the president of the United States Trotting Association (USTA) had many thoughts, among them, “What took you so long?”

Williams, who is also the president of Hanover Shoe Farms, by far the largest breeder in harness racing, was the one who led the charge to have similar rules enacted by the USTA, the Standardbred equivalent of The Jockey Club. He started to call for limits on the amount of mares a stallion could be bred to as far back as 2004. Starting in 2009, no new Standardbred stallion was allowed to breed to more than 140 mares. That's the same number being proposed by The Jockey Club.

Because there are roughly one third as many Standardbreds bred in the U.S. each year as there are Thoroughbreds, the problems of in-breeding were more dire for the trotters and pacers. The breeding industry was dominated by a handful of top stallions, some of whom were sent to 200 or more mares a year. There was not a lot of science available at the time, but you didn't need to be an expert in the field of genetics to realize this could cause serious problems.

“I was the instigator,” said Williams, who, at the time was a vice president at Hanover and on the USTA Board of Directors. “I felt we might be breeding ourselves into a corner and we needed to look a that.”

The USTA commissioned a study by Dr. Gus Cothran of the University of Kentucky. Cothran concluded that the Standardbred gene pool was becoming less diverse, and that the breed would suffer in the future because of that lack of diversity.

“Cothran, he did a study for us to assess the loss of heterozygosity in the Standardbred breed,” Williams said. “He looked at both pacers and trotters and he calculated we were going to breed ourselves into a corner if we kept on going with unlimited books.”

Heterozygosity has been defined as “overall genetic diversity in an individual that can then be averaged over the entire population–or in this case, the breed.”

Williams said that the breeding industry was already seeing a rise in the amount of horses born with Osteochondritis Dissecans problems (OCD), as well as an increase in fertility problems, but it was more the fear of the unknown that had the sport worried. Certainly, too much in-breeding was likely to lead to a less healthy horse.

“When I was growing up you did not see cancer in horses,” Williams said. “You just didn't see it and (top pacing stallion) Somebeachsomewhere died of cancer (in January of 2018) at the age of 13, half the age you'd expect a horse to die at. What's going on? Situations like that show you how careful you have to be.”

It took a few years from the time Cothran's study was completed until the USTA implemented its new rules, but once they went into effect the industry has not looked back. In fact, some believe 140 is still too high a number and have called for the number to be reduced to 100.

As expected, some breeders objected and sued. The same could happen in Thoroughbred racing if The Jockey Club goes through with its proposal. Williams said the lawsuits went nowhere, a factor The Jockey Club's lawyers are likely well aware of.

Williams said antitrust lawsuits were filed alleging restraint of trade by the USTA and Williams was among those deposed. He said that once the depositions began it became so clear that the plaintiffs had no case against the USTA and the lawsuits were dropped.

“I had contacted lawyers with what is probably the best antitrust law firm in the country and the lawyers there gave us their opinion that we were OK,” Williams said. “He said there were no antitrust problems with doing this. Basically, if you do something which is a burden on commerce but it is not done for commercial reasons but rather for scientific reasons that benefit an industry you can do it.”

He said most people in the industry already understood that in-breeding was a problem that had to be dealt with and didn't object to the rule changes.

“Most people were very good about this,” he said. “They felt in their hearts a dedication to the breed and saw the value to this. A feeling persisted that this is good for our horses, so we're OK with it.”

Ironically, Hanover had more to lose than perhaps any other entity in the sport. It has been the annual leading breeder in the sport for as many years as the USTA has been keeping records and was among the guilty parties when it came to breeding their stallions to huge books of mares.

“At Hanover, we were clearly hurt by this,” Williams said. “It was one of those situations where, as a USTA director I had a potential conflict of interest, but, because I took a position contrary to my economic interests it was a moot point.”

At least for now, Williams is not in favor of lowering the number of mares a stallion can be bred to any further. He said there's no reason to make any changes until the results of on-going research into the Standardbred genome are completed. A genome is an organism's complete set of DNA, including all of its genes. In time, when the full make up of the DNA of a Standardbred is available to breeders, people will be able to make breeding decisions equipped with scientific data that will give them the ability to avoid problems that could be caused by in-breeding.

The USTA is strongly opposed to the Horse Racing Integrity Act, which is being pushed hard by The Jockey Club, so the two organizations are often at odds. But when it comes to The Jockey Club's attempts to limit book sizes, Williams believes it is on the right track.

“This may be the only thing I agree with them on, but, yes, definitely, I believe what they are trying to do is important and the right thing to do,” he said.

Why Some Races are “Win and You're In” and Some Are Not?

Why not something simple, like every Grade I race that fits a particular Breeders' Cup race automatically becomes a WAYI race? When a horse wins a WAYI event the owners do not have to pay an entry fee to get into a Breeders' Cup race and the horse's travel expenses are covered.

Breeders' Cup President and CEO Craig Fravel said the Breeders' Cup can only afford to have so many “challenge” races and therefore must pick and choose. He said several criteria are involved, including the history and importance of the race, making sure that one racing circuit isn't favored over any other and helping tracks bolster particular races they are looking to promote by adding the WAYI bonus.

“Because of the way American and International racing calendars are it can't be a scientific as we would all like it to be,” he said. “The pattern of racing and placements and timing of racing are not so well defined. It doesn't lend itself to easy scheduling. It's a confounding problem that underlies the situation overall.”

So far as the Travers versus Haskell goes, the date of the Haskell was moved up by eight days because there was a window on July 20 to televise the race on NBC, the network the Breeders' Cup is affiliated with. As part of the deal to get Monmouth to move the race, the Breeders' Cup agreed to make it a WAYI race. (Ironically, because of the excessive heat that day and Monmouth's decision to delay the Haskell, it never did appear on TV). As for the Travers, Fravel said that NYRA already has a preponderance of challenge races and the Breeders' Cup tries to be careful not to give one track too many races.

He also said that when a track calls upon the Breeders' Cup for a favor it will listen.

“The Breeders' Cup is an industry asset and when the industry asks us to help with things we try to help,” he said.

He used the two Belmont races from this Saturday as an example.

“(NYRA Senior Vice President, Racing Operations) Martin (Panza) was very interested in getting the six-race turf series they put together this year off to a fast start,” Fravel said. “He wanted us to name one of them a challenge race. In discussions with him and the NYRA team this was the race we came up with. We didn't have the capacity to add two.

“The same thing happened with the race at Kentucky Down (the Runhappy Turf Sprint). That track is doing a lot of good things and we thought it would be a good thing to help them out by making that a challenge race.”