Home » Archive » Top News » What Would You Fix? Carrie Brogden

What Would You Fix? Carrie Brogden 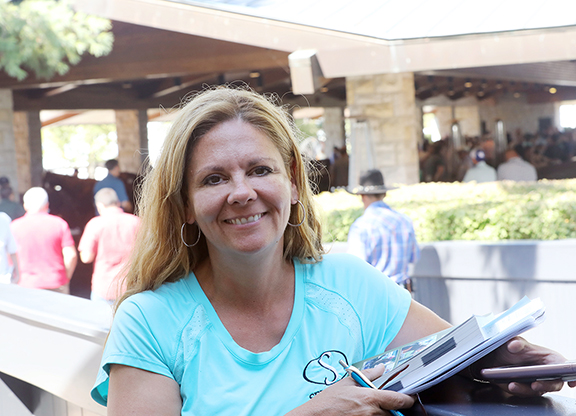 For the past few weeks, we have been running a series of responses to The Jockey Club's proposed cap on a stallion's book at 140 mares. Many people expressed the feeling that there were more pressing problems to which the industry should attend. So we asked a group of respondents, `What would you fix first?'

I truly believe that the whole industry needs to be streamlined. We are governed by 38 state governments. I'm no longer naïve in thinking that we can just mandate change. I think the biggest issue is that we need a federally appointed racing commission, with one set of rules regarding medication, whatever those may be. One set of rules regarding licensing.

We make everything so difficult. Can you imagine driving your car and every time that you cross state lines you have to get a license every single year? I don't think any of it is going to be streamlined and fixed because it's all about the money.

Another thing is the irrational side of government. I have to get fingerprinted every three years to get a Florida license. Guess what? Your fingerprints don't change, so it's really frustrating.
I had a filly race at Woodbine and there was purse money in the account at Woodbine. I wanted to shift over the funds from my winnings to my trainer's account, which is in house at Woodbine, so that I can cover the training bill. They said, “Oh, yeah, well we can do that if we have a copy of your drivers license and a notarized this and that,” and at the time I just wanted to tell them to forget it.

The fact that people can order their groceries online and have them delivered, that's the way life is going. The life of immediate gratification. Our industry is the opposite. We put up so many hoops to jump. Why is there not one universal license? It's because of money. Every single time I go to get fingerprinted I have to pay money to the police department. Every time I send in a fingerprint card I also have to send a check. We create our own obstacles.

People are terrified by the Federal government and I just think that we are already run by 32 different state commissions. That's why our industry toils, because ultimately, the government is not a good steward of anyone's money. There's no accountability, so they just take, take, take. So the culture of Louisiana racing is going to be completely different than the culture of Virginia at Colonial Downs. That is to me the most pressing issue and we continue to go down the rabbit hole.

We need to embrace a federally appointed commission. Everyone is arguing that if the commission was appointed, we would have to get rid of drugs in racing and our horses can't run without drugs. Even if you feel that way, at least there's going to be a unified policy of how much of some drug that you can have in your system. At least its not going to be different from Kentucky, as it is in Virginia, as it is in New York.

Until these things start to change, we are just going in circles. I got here in 2001. Craig Bandoroff and I were talking and thinking about back in 2008. He had said, “Oh great, I'm glad you guys are in to fight the fight.” And now I've been fighting the battle for 18 years, and he's been fighting for 10 years before me. Nothing can change because no rules can supersede the state government, except the federal government. I'm not asking for the feds to run it, I'm just asking for the ability to have a unified racing commission with teeth and power, and it has to be federally appointed.

We were in the Vision 2020 group about seven years ago and tried to have a Lasix-free race at Keeneland. It wasn't allowed. We wanted to have a drug- free race. I have a two-year-old training with Kenny McPeek I would love to run her in a drug-free race. She doesn't need Lasix. We couldn't do it because of the legislature. Stuff like that boggles my mind.

I will say that all of this negative publicity has actually been positive to get horse racing back in the news. It would be great if we took this opportunity to sort out all the major problems. We have the most important thing of all in our corner–the horse. It has to be about the horse. Until it's about the horse, we will continue to go down the rabbit hole.