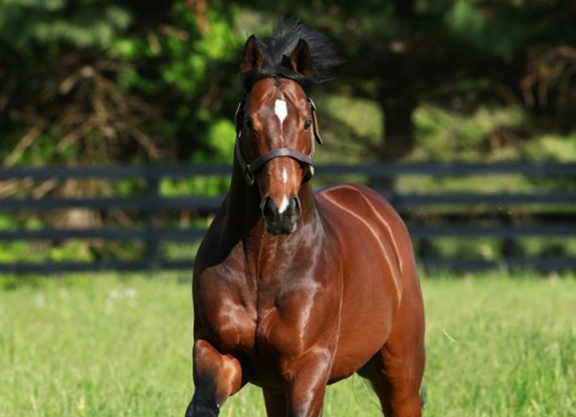 No matter what he does, Lookin At Lucky (Smart Strike) seems condemned always to be the short guy in the back row of the team photo. In the private duel that defines his stud career, moreover, he has to endure Munnings (Speightstown) moving ever closer, year by year, to front and center.

These two splendid sires, who started out together at Ashford in 2011, experienced rather typical fortunes last Saturday when dividing the big sophomore tests in New Orleans between them (along with those skilled gentlemen, Brad Cox and Florent Geroux). Munnings, who can seemingly do no wrong, had odds-on favorite Finite comprehensively beaten in the GII Fair Grounds Oaks–only to pick up the pieces with another daughter, Bonny South. The GII Louisiana Derby success of Lookin At Lucky's son Wells Bayou, in contrast, was swiftly attributed to the way he controlled a pace as hollow as the eerily deserted grandstands.

Somehow the stallion who has given us a GI Breeders' Cup Classic winner and GI Kentucky Derby winner in the last two seasons cannot get the traction he so manifestly deserves. Despite losing ever more ground in their relative crop sizes-hitherto he has had 357 lifetime starters, compared with 431 for Munnings, and that gap is only going to grow larger-Lookin At Lucky has so far had 27 graded stakes horses (leaving aside his excellent record in the Southern Hemisphere) compared with 26 for his rival. Yet his yearling average last year sank to $41,266 from $52,910, placing him at No. 80 in North America.

In contrast, there has been wise guy momentum behind Munnings for a good few years now. His yearlings broke into the top 40 last year, trading at $71,748, and his fee this spring was hiked to $30,000 from $20,000–at which fee Lookin At Lucky remained pegged, despite adding Country House to Accelerate at the head of his resume.

To be fair, Munnings is absolutely living up to his billing–notably, this year, in dominating the Oaks picture through Venetian Harbor, Finite and now Bonny South.

The weathervane swung round to Munnings very early. Both the Ashford rookies made a solid start with their first crop, finishing third and fourth by earnings, with Lookin At Lucky on top by winners with no fewer than 29 from just 44 starters. But their rewards the following year were in striking contrast: Munnings catapulted straight into the top six books nationally, more than doubling his traffic from 94 to 196 mares, while Lookin At Lucky trod water at 115 (from 121). The die was cast: their respective books since have been 182, 178, 134 and 202 for Munnings; and 126, 76, 92 and 134 for Lookin At Lucky.

Munnings, to be fair, had to earn his stripes as a $12,500 start-up. And this cluster of Oaks fillies belong to only the second crop after his numerical breakout, so he's not hanging around in making most of the upgrade in both the quality and quantity of his mares.

Take Bonny South herself: a Juddmonte homebred out of a Tapit half-sister to a Group 1 winner; second dam a sister to the dam of Sightseek (Distant View) and Tates Creek (Rahy), also the family of European Classic winner Special Duty (GB) (Hennessy) and GI Breeders' Cup Mile scorer Expert Eye (GB) (Acclamation {GB}). Should Munnings continue to consolidate, aged 14 and now routinely receiving guests of this caliber, there's every prospect that he will work his way out of the middle market into the elite.

But we can't stand up for Lookin At Lucky without implying the slightest disfavor for his studmate. The fact is that he has done everything you could have hoped for, when he retired at $35,000, and yet has spent most of the time since bumping along at around half that fee.

How typical, that his Kentucky Derby winner should have yielded so much attention to the historic relegation of the first past the post; and then been denied the chance to confirm his merit thereafter.

Be that as it may, Country House did something beyond every other member of the crop: namely, to finish in front of 18 horses in the Derby. And his sire, from just four previous crops, had already produced a horse able to do that, Lookin At Lee having beaten all bar Always Dreaming (Bodemeister) in 2017.

That was one of several early near-misses for Lookin At Lucky at the Grade I level (poor Money Multiplier four times a runner-up), but the slow-burning Accelerate–another graduate of his second crop–put all that right with his spectacular blossoming at five. Only Monomoy Girl (Tapizar), moreover, prevented Lookin At Lucky's shuttle daughter Wow Cat (Chi) from matching Accelerate's success at the 2018 Breeders' Cup in the GI Breeders' Cup Distaff (having already won the GI Beldame S.).

Nor was Country House a flash in the pan last year, when Lookin At Lucky and Munnings both had eight graded stakes performers, from 187 and 256 runners respectively. Lookin At Lucky had three winners at that level, against two for Munnings; and three Grade I horses (Munnings had one).

If this is not a “sales sire,” then I'd like to know what exactly all these experts touring round the yearling barns are looking for? Yes, people quibble over his conformation below the knee. He was, remember, a $35,000 buyback as a yearling. But his balance, size, scope and athleticism amply redressed any such concerns on the track, starting with his revised valuation when returning to Keeneland the following April, when he made $475,000 at the 2-year-old sale.

Lookin At Lucky then proceeded to become only the fifth male (following Secretariat, Seattle Slew, Affirmed and Spectacular Bid) to match soundness to class sufficiently to add a sophomore championship to his juvenile Eclipse Award. He secured the Classic that was his due in the GI Preakness, having made a heroic charge from 18th to sixth out of the rail gate in the Derby; while a May 27 foaling had not prevented him from winning three of his five Grade I prizes at two. Nonetheless, as was most conspicuous in Accelerate, he has matched Curlin–a less precocious son of Smart Strike–in often drawing sustained improvement from his stock as they mature.

Wells Bayou absolutely fits the Lookin At Lucky template, having been buried as Hip 3281 at the September Sale, where he made just $18,000 as a back-ring spot by Whitman Sales and Judy Karlin. That was a disappointing return for Willow Pond Stable, which had given $50,000 for him in the same ring that January. But the next pinhook went rather better, as he realized $105,000 from Lance Gasaway (working with Liz Crow) after a :10 1/5 work at O.B.S. March.

Evidently there were one or two veterinary concerns, again just as had been the case with his sire, but handsome is as handsome does. And while Cox had to back off his new recruit for a while, Wells Bayou regrouped to win on debut at the Keeneland fall meet. Disappointing at Churchill the following month, he resumed his progress when sent to Oaklawn, winning an allowance before holding off all bar Silver Prospector (Declaration Of War) in the GIII Southwest S. On Saturday, the extra furlong and, okay, a comfortable early pace enabled Wells Bayou to stake his Derby claim–whether for Arkansas in May, or Kentucky in September.

He certainly has a legitimate Classic pedigree. His dam Whispering Angel is by the flourishing Hard Spun (Danzig) out of a Theatrical (Ire) half-sister to the mother of Big Brown (Boundary). And she was, moreover, clearly talented herself: she won two of just three starts for Todd Pletcher after being picked out as a $140,000 Keeneland November weanling by James Delahooke for Bobby Flay. Her odyssey since, in view of her son's emergence, is one that will have left a good deal of regret in its wake.

Whispering Angel was carrying Wells Bayou when first discarded for $50,000 to Knowles Bloodstock at Keeneland November 2016; and then the pair of them were sold as consecutive lots, both to Willow Pond, in the same ring 14 months later. The mare, carrying a Karakontie (Jpn) filly, brought $35,000; and her son, as just noted, made $50,000. That investment did not pay off as deserved. The loss made by Wells Bayou that September seems tough enough, with hindsight; but Whispering Angel, incredibly, changed hands for just $3,000 back at Keeneland the following January.

Still, the nature of this business is such that seller's remorse always spells joy for someone else. The luck, this time, was with Windylea Farm. True, the mare had arrived in the ring having already lost a pregnancy to Kitten's Joy. But this year she has safely delivered an Army Mule filly and was covered–on the very eve of the Louisiana Derby–by none other than Lookin At Lucky. (Watch for a TDN story on Windylea's coup in the coming days.)

Bearing in mind that she is still only eight, continued progress by Wells Bayou could qualify Whispering Angel as one of the all-time bargains. Even as it stands, all being well, she can deliver a full-sibling to a Louisiana Derby winner with a page already decorated by a Kentucky Derby success. Moreover Big Brown's third dam, and Wells Bayou's fourth, was a Damascus half-sister to champion Hidden Lake. Their mother was by Round Table, and this was a family developed for four generations by the estimable Nuckols clan at Hurstland. So it's all good stuff, at least until Whispering Angel's own dam proved unable to win in 11 maidens and was eventually sold to Venezuela.

Big Brown, of course, was by a son of Danzig–and that breed-shaping name recurs top-and-bottom in the page of Wells Bayou. Not only is his dam by Hard Spun; Lookin At Lucky himself is out of a mare by another son of Danzig, in Belong To Me. An auspicious mirror image, in a pedigree full of speed that carries.

Yet what might Lookin At Lucky see, in his own reflection? A guy that everyone else seems able to look through. And, as such, one whose every achievement is earned not by luck, but by merit.