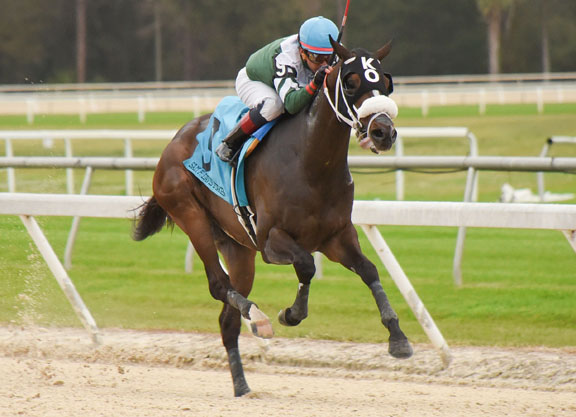 Well Defined (With Distinction), a 7-1 shot, set all the pace and came home an authoritative 2 3/4-length victor, while favored Knicks Go (Paynter) faded to fifth as the Tampa Bay Downs path to the Kentucky Derby kicked off with the GIII Sam F. Davis S. at the Oldsmar oval Saturday. Well Defined, adding blinkers for the Davis, sprinted out to the early lead and enjoyed a clear advantage through fractions of :23.23 and :47.09 with Knicks Go his closest pursuer. The favorite was asked for more midway on the turn, but Well Defined scampered further clear into the lane with only the late-running Kentucky Wildcat (Tapit) offering any sort of threat in the closing strides.

“That's very, very special to do it at Tampa Bay,” said winning trainer Kathleen O'Connell. “He's had little things that have happened and he's grown up mentally and physically, and today he showed up with his game face on. I like this horse a lot and the decision [on what's next] will be up to the owners, but we just want him healthy.”

The front-running victory was no surprise to jockey Pablo Morales.

“This horse has a ton of natural talent and I was going to take advantage of that,” Morales said. “I wasn't too worried about where I was going to be because we were really lucky with the draw position on the outside, so I figured I was going to ride a cool race. The horse is naturally fast and has a super-long stride.

I was going to come out running, but if somebody wanted to take the lead, I was OK with that. My horse was going as comfortable as he possibly could. I knew he was doing it relaxed and very much on his own. I had a lot of horse going into the second turn, so I figured I was going to ask him a little more and not wait for them to get me. If they were going to catch me, they were really going to have to come running.”

Kentucky Wildcat, coming off a maiden score at Aqueduct Dec. 1, stormed into contention turning for home and briefly looked to have a chance in the lane, but was unable to match the winner's strides late. He was pulled up after the wire and vanned back to the barn.

“Albin [Jimenez] said he was getting out a little around the turn, so I don't know what to make of that,” trainer Ben Colebrook said of the beaten favorite. “It looked like he had dead aim and then he kind of flattened out. It didn't go the way we wanted, but hopefully there will be another day.”

A maiden winner on debut at Gulfstream last June, Well Defined earned a trip to the Breeders' Cup with a 7 1/2-length romp in the 1 1/16-mile In Reality division of the Florida Stallion Stakes last September. He came home a well-beaten 12th behind champion Game Winner (Candy Ride {Arg}) in the GI Breeders' Cup Juvenile and opened his sophomore campaign with a fifth-place effort behind Mihos (Candy Ride {Arg}) in the Jan. 5 Mucho Macho Man S.

“He is kind of a free-running horse,” O'Connell said. “His rear end slipped out from underneath him in the Breeders' Cup Juvenile and he was compromised on early position when he ran in the Mucho Macho Man and got bottled up inside, but he's a young horse who is improving, mind-wise and everything-wise.”

Well Defined is out of the unraced Fru Fru. Gilbert Campbell's Stonehedge purchased the mare for $18,000 at the 2013 OBS January sale. She produced a filly by Khozan last year and was bred back to Greenpointcrusader. The winner's second dam is Lolabell, who won the 1999 Minaret S.