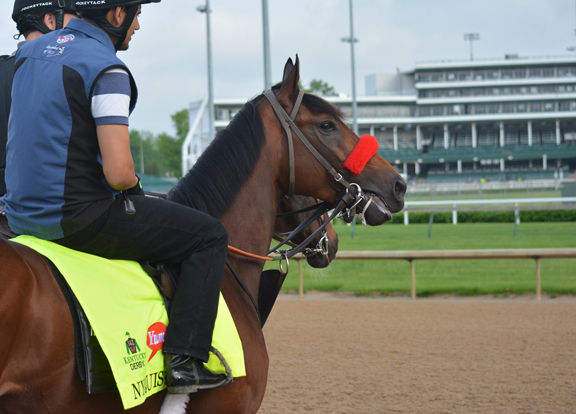 Retired Hall of Fame jockey Pat Day was on hand as the masses flocked to the gap areas at around 8:15 a.m. Day, of course, guided Lil E. Tee to a memorable upset in the 1992 Run for the Roses.

Under partly sunny skies with a slight breeze blowing, it was much more comfortable out than the previous morning as temperatures stayed in the low 60s with lower humidity. With the track upgraded to “fast” following the renovation break, there was no shortage of activity during the special Derby/Oaks training session at 8:30 a.m.

It's only right to begin with the unbeaten Derby favorite Nyquist (Uncle Mo), who had another easy morning of jogging with the pony after briefly setting up shop by the rail to take everything in. Doug O'Neill assistant Leandro Mora was also now on hand to help monitor the champion's activities in Louisville.

The father-and-son team of Mark and Norm Casse watched on the track by the chute as Fellowship (Awesome of Course), currently on the outside looking in at 21st on the leaderboard, made his way out to gallop.

Shagaf (Bernardini), favored in all four of his previous trips to the post, including a disappointing fifth in the GI Wood Memorial S., seems to be getting over the track quite well here as evidenced by his smart four-furlong move beneath the Twin Spires Friday. Fellow 'TDN Rising Star' and Chad Brown trainee My Man Sam (Trappe Shot), who can be a bit of a handful at times for his exercise riders, seems to be settling in better with each trip to the track. He too has only made four career starts, headed by his promising runner-up finish in the GI Blue Grass S.

After watching Mohaymen (Tapit) on video last week, including his pre-breeze gallop Friday where he attempted to hurdle a few times, the striking gray looked much more relaxed during his 1 3/8-mile gallop Monday. From a physical standpoint, as expected, the $2.2-million KEESEP graduate certainly looks the part.

Mor Spirit (Eskendereya) was one of three Derby hopefuls to turn in breezes Monday. With Hall of Famer Gary Stevens aboard, the GI Santa Anita Derby runner-up worked five furlongs in :59.80 (2/27). Stevens and Bob Baffert, both delighted with the piece of work, teamed up to take the 1997 Derby with the great Silver Charm.

Three Chimneys representatives Case Clay, Doug Cauthen and Chris Baker as well as WinStar's Elliott Walden were all spotted on the backside.

Majesto (Tiznow), runner-up in Nyquist's GI Florida Derby, caught the eye while galloping, and not only because of his flashy four red wraps and white reins/bridle combo.

Outwork (Uncle Mo) and Destin (Giant's Causeway) both galloped with good energy under the watchful eye of trainer Todd Pletcher after having a scheduled day off Sunday.

With a large group of 12 schooling in the paddock later in the morning at 10:30 a.m., Santa Anita Derby hero Exaggerator (Curlin) stood out from the bunch while touring the area with two handlers. Trainer Keith Desormeaux was all smiles while keeping close tabs on the handsome dark bay in the saddling area, as was Bradley Weisbord, who brokered a minority interest in Exaggerator earlier this year on behalf of Sol Kumin's Head of Plains Partners. Tom Ryan of SF Bloodstock was also in attendance as the crowd of observers continued to swell.