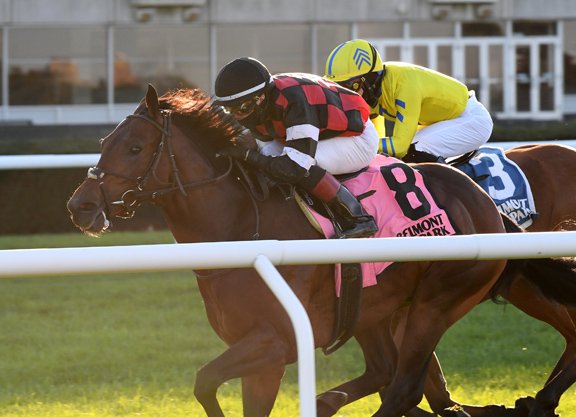 Step Dancer became the first winner for his freshman sire (by War Front) when he led home a one-two for War Dancer on debut Sept. 4, and he gave the MGSW turf router a first black-type victory Saturday. Third in the GII Pilgrim S. Oct. 3, the bay worked his way to the rail from the seven post while traveling towards the back half of the field early here. He snuck a bit closer heading for the home turn, and remained inside for the stretch run as he waited for a seam. Like a Saltshaker moved first and too the lead, and when he opened up, he drifted off the fence, allowing Step Dancer room to run. The latter charged through on the rail, and had more than Like a Saltshaker could handle late. Both of the top two finishers were produced by freshman sons of War Front.

“I saw Jose [Ortiz, aboard Like a Saltshaker] looking for some room and I was just making sure I had some options in front of me,” said winning rider Dylan Davis. “Jose was able to get through, so I followed him and I thought something else might open up, and it did. He just loved the ground. He kept finding more and more. I was very impressed with him today. It was just like how he wowed me first time out. He really stepped up again today.”

Robin Smullen, assistant to trainer Barclay Tagg, who was in Kentucky with GI Breeders' Cup Classic contender Tiz the Law (Constitution), added, “Last time we, we stayed a little too close to the pace and we thought we had to on the inner turf, but it took away from his kick. Today, I told Dylan [Davis] I wanted him five lengths off the pace and to find a spot and don't ask him until he turns for home. He came home with a great kick. He doesn't need to get to the outside. He showed that he's game and he can do whatever you want.”