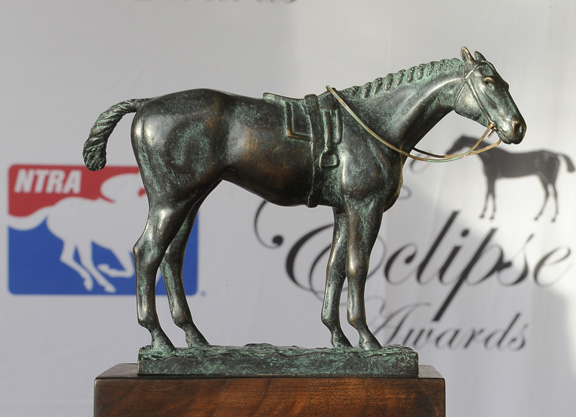 The 50th annual Eclipse Awards, honoring champions of 2020, will be held virtually Thursday beginning at 8:00 p.m. ET. The ceremony, presented by Spendthrift Farm, will be televised on TVG and RTN and streamed by a number of other industry outlets, including on the TDN website. The official digital program can be viewed at NTRA.com. GI Kentucky Derby and GI Longines Breeders' Cup Classic winner Authentic (Into Mischief) appears likely to take home Horse of the Year honors, along with champion 3-year-old male for a 2020 campaign that also included a win in the GI TVG.com Haskell S. and seconds in the GI Runhappy Santa Anita Derby and GI Preakness S. Fellow Bob Baffert trainee Improbable (City Zip) is also a Horse of the Year finalist as well as presumed champion older male. He took a trio of prestigious Grade I events last year–the Hollywood Gold Cup S., Whitney S. and Awesome Again S. before finishing second in the Classic. Monomoy Girl (Tapizar), the leader in the champion  older female category, rounds out the Horse of the Year finalists. Named champion 3-year-old filly in 2018, the Brad Cox pupil missed of all 2019, but capped a four-for-four 5-year-old season with her second GI Breeders' Cup Distaff title. She subsequently sold to Spendthrift Farm for $9.5 million at Fasig-Tipton November. See Friday's TDN for a complete recap of the awards.

This story was posted in Shared News and tagged Authentic, Eclipse Awards, Horse of the Year, Improbable, Monomoy Girl.