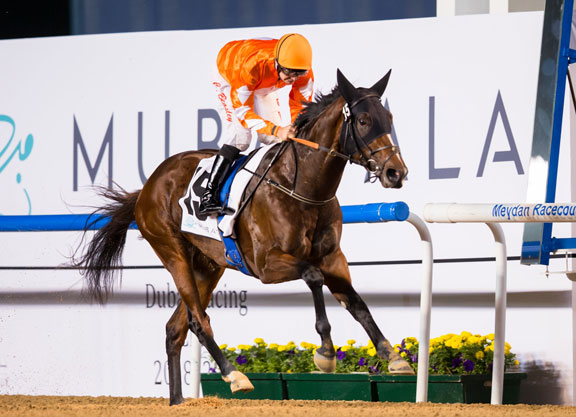 Walking Thunder (c, 3, Violence-Street Show, by Street Boss) posted his third straight open-length victory to remain unbeaten in an eye-catching performance in Meydan's UAE 2000 Guineas trial going a mile on the dirt on Thursday. Fast from the gates, Walking Thunder and jockey Connor Beasley sat on the flank of Power Link (Data Link) down the backstretch. Pulling even with that rival rounding the bend, the hooded dark bay pulled clear with a few slaps of the whip at the top of the straight and was soon about 10 lengths clear and winning geared down. Manguzi (Fr) (Planteur {Ire}) was second.

“From a wide draw, I just thought I would let him jump and, instead of fighting, let him breathe and find his feet,” said Beasley. “He did that really well today and he travelled very easily. He is a real professional in his mannerisms; the way he goes to start–just everything. To me, he feels like a good horse. When the draw came out, I was a bit disappointed, but in hindsight, it worked out really well. I've let him get into stride and I had no kickback in his face; not that he minds kickback. He had a smooth passage throughout and I think that was probably key.”

A 5 1/4-length debut winner at Meydan going 1400 metres on Nov. 1, Walking Thunder added to that with a 4 1/2-length score over this track and trip on Dec. 12. He was a $42,000 OBS April purchase by trainer Ahmed bin Harmash, signed for by his assistant Alessandro Marconi from Q Bar J Thoroughbreds. This was the first carnival winner for the Phoenix Ladies Syndicate, an affiliate of Phoenix Thoroughbreds.

The G1 Jean-Luc Lagardere winner Royal Marine (Ire) (Raven's Pass) broke towards the back of the field on the speed-favouring track. Allowed to take his time by Christophe Soumillon, he crawled into contention rounding the bend and although he had far too much ground to make up, he stayed on well enough to be fourth on his dirt debut. “We got off to a slow start and he finished well in the end. He needed that run,” said Soumillon.