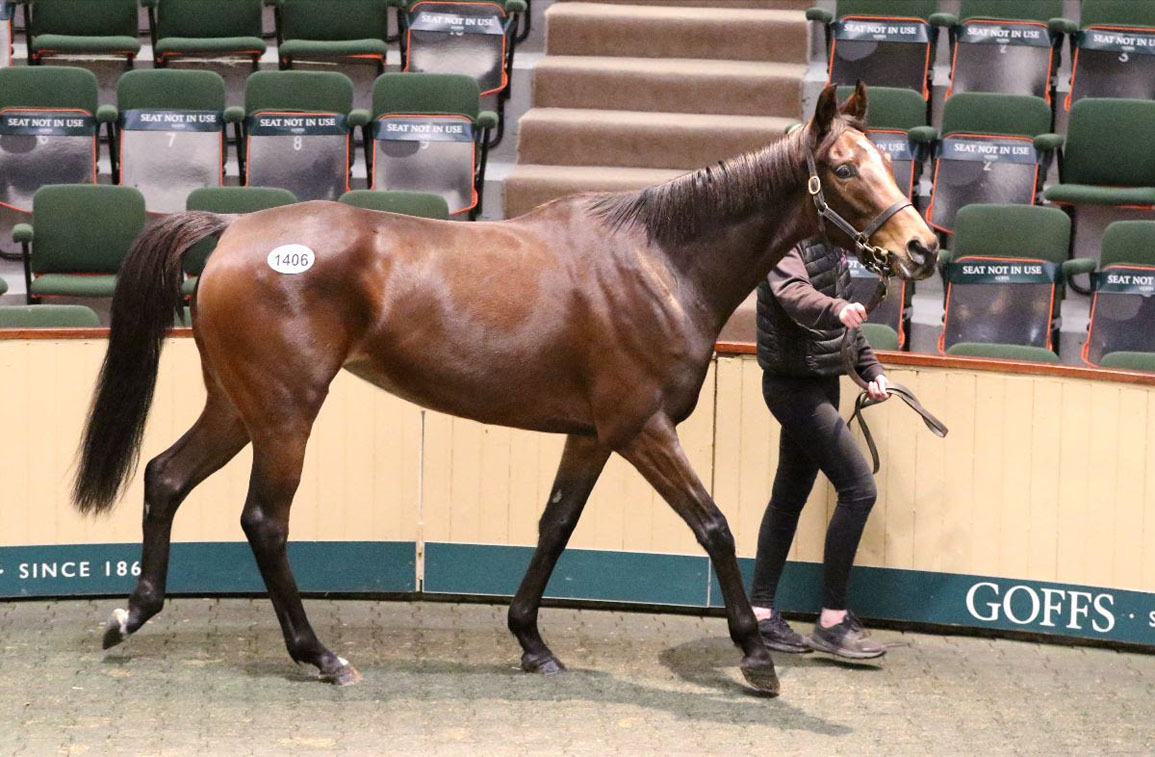 The level of trade during Saturday's second and final session of the Goffs November Breeding Stock Sale was meant to take a step down following Friday's electric marquee session, but Baroda Stud's 3-year-old Galileo (Ire) filly Loyal (Ire) (lot 1406) ensured there was still a six-figure bidding battle, with the dust eventually settling in favour of Ballylinch Stud–who bred the filly and raced her in partnership with Susan Magnier and Michael Tabor–for €280,000, the highest price achieved on the second day of the Breeding Stock sale for 15 years.

Loyal ran four times this season for trainer Aidan O'Brien. She is the first foal out of Chartreuse (Ire) (Lawman {Fr}), the listed-winning and multiple group-placed mare purchased by Ballylinch from Highclere Stud for 825,000gns at Tattersalls December in 2016. Chartreuse is a granddaughter of Mahalia (Ire) (Danehill), whose descendants include the Group 1-winning brothers Ectot (GB) and Most Improved (Ire); G3 Nell Gwyn S. and G1 1000 Guineas third Daban (Ire), and Purplepay (Fr) (Zarak {Fr}), who doesn't appear on the page but was third in the G1 Criterium International after the publication of the catalogue. Chartreuse's 2-year-old filly Expand The Map (Ire) (Dark Angel {Ire}) is in America, having been bought by Mike Ryan for 230,000gns as a yearling last year, and she finished second in the Klaravich silks in her lone start at Saratoga in July to none other than the GI Breeders' Cup Juvenile Fillies Turf winner Pizza Bianca (Fastnet Rock {Aus}). Chartreuse has a yearling filly by Dubawi (Ire) that was a 370,000gns buyback at Tattersalls October this year and a filly foal by Lope De Vega (Ire).

“Her dam is a lovely young mare and everybody knows how good Galileo is as a broodmare sire and some of his daughters who didn't perform on the track have gone on to be good broodmares,” said John O'Connor, managing director of Ballylinch Stud. “It could all still happen for her in the next few years and we will observe with interest what happens around the family.”

The 2021 renewal of the Goffs November Breeding Stock Sale produced results not seen at the auction since the heady days of the Wildenstein Dispersal in 2016 and the Paulyn Dispersal in 2013. The sale was back up to two days this year from one in 2020, making direct comparisons inexact, but there is no denying nonetheless the strength of the past two days. A total of 371 fillies and mares were sold (81%) for €16,219,300, up from the €5,490,600 accrued from 174 sales last year. The average jumped 38% to €43,718, while the median was up 26% to €17,000. Though Alcohol Free's dam Plying (Hard Spun) was the star of the show at €825,000, there was incredible demand for the offerings from Derrinstown Stud, Godolphin and the Aga Khan Studs.

“Thank you,” said Goffs Group Chief Executive Henry Beeby upon conclusion of trade. “It's no secret that Ireland, Irish bloodstock and, by association, Goffs have endured a torrid time over the last while, and so it has been most uplifting to host a sale of such vibrancy, strength, depth and consistency over the last six days. For that we firstly have our vendors to thank and, as ever, we are indebted to each one of them for their support of our sale.

“We commented on a superb Foal Sale on Thursday, but even that amazing trade almost paled into insignificance when compared to the electric atmosphere of our Breeding Stock Sale, most especially yesterday although today's top price is the highest for the session in 15 years. We knew that we had assembled the best catalogue for many years as so many major breeding entities had drafts of note but the tempo, enthusiasm and hunger to buy was just breathtaking as a huge cast of international buyers, both in person and online, battled for mare after mare to highlight the enduring attraction of the best Irish bloodlines. The class of 2021 will disperse around the globe as international breeders tap into the class and quality that was offered, whilst it was also heartening to see so many local stud farms investing in the future.

“Goffs November has long held a significant place in the calendar and the last week has only underlined its importance to Irish breeders, who sell with us safe in the knowledge that they will always get that little bit more, as well as international buyers who are attracted to Ireland by the quality on offer, together with the unique welcome they receive from the Goffs team and our colleagues at Irish Thoroughbred Marketing. Indeed, a trip to Goffs is of course for business but our teams always go out of their way to make it enjoyable at the same time. So our thanks to everyone who has walked through our famous gates this week. Nothing is possible without their patronage and we truly value every lot and each bid.”

Offerings from the Aga Khan Studs were popular during Friday's session, and that trend continued on Saturday, with that draft accounting for the second and third highest prices, both 3-year-old fillies. Richie Fitzsimons of BBA Ireland signed at €80,000 for the unraced Rayagara (Ire) (Dark Angel {Ire}) (lot 1349), a daughter of the G2 Debutante S. winner Raydara (Ire) (Rock Of Gibraltar {Ire}) and half-sister to G3 Derrinstown Stud 1000 Guineas Trial third Ridenza (Ire) (Sea The Stars {Ire}).

“Mystery Angel, who was second in the Oaks this year, is out of a Dark Angel mare so the cross is an exciting one. She is a nice filly and the mare has already produced a Group 3-placed filly rated 96 with her first runner,” Fitzsimons said.

Tally-Ho Stud, meanwhile, scooped up the twice-placed Sunniyra (Ire) (Zoffany {Ire}) (lot 1351) for €68,000. She is out of the G3 Derrinstown Stud Derby Trial second Summaya (Ire) (Azamour {Ire}), from the extended family of her breeder's Derby winner Sinndar (Ire).

The late Sheikh Hamdan's Derrinstown Stud was the clear leading vendor at the Goffs November Breeding Stock Sale, culling 40 for €4,508,000. Derrinstown had accounted for five of the top seven lots on Friday and its top seller on Saturday was the winning Shaaqaaf (Ire) (Sepoy {Aus}) (lot 1338), who was sold in foal to first-season covering sire Mohaather (GB) for €60,000 to Tipper House. The 7-year-old Shaaqaaf is out of the listed-winning Burke's Rock (GB) (Cape Cross {Ire}). Also hitting the €60,000 mark was Marlhill House Stud's 6-year-old Clifftop Dancer (Ire) (Canford Cliffs {Ire}) (lot 1356), who was scooped up by Holloway Thoroughbreds. The half-sister to group winners Bankable (Ire) and Cheshire (GB) is carrying her second foal, by Fastnet Rock (Aus), after producing a Highland Reel (Ire) filly this year.