Veronique a Timely Purchase for Holmes 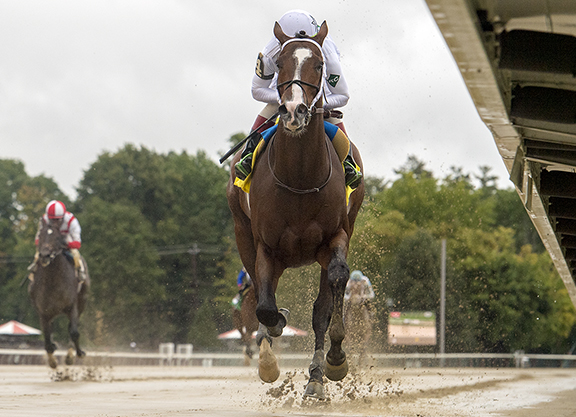 Tony Holmes has enjoyed sales success with mares he has purchased in partnership with employees of his Marula Park Stud in the past, but next week the native New Zealander and a 22-year veteran of the farm may have success on the next level when they send Veronique (Mizzen Mast) (hip 244D) through the ring during Monday’s first session of the Keeneland November Breeding Stock Sale. Holmes purchased the mare, in foal to Mastery, privately after she RNA’d for $22,000 at last year’s Keeneland November sale. It was 10 months later that her son Nashville (Speightstown) made a smashing debut at Saratoga (video), earning the ‘TDN Rising Star’ designation. When the 3-year-old colt romped home by an effortless looking 9 3/4 lengths in a Keeneland allowance (video) Oct. 10, Holmes and his partner decided to supplement the mare to the November sale.

“There is a really nice man who has worked for us for 22 years and I was looking for a mare for us to own together,” Holmes explained of Veronique’s purchase last fall. “I financed the mare and that was the whole objective. He’s been the backbone of our operation and he’s a really nice guy. The plan was to sell babies out of this mare for an income. But things have swung around in our favor, so you’ve got to take them when they do that.”

While Nashville hadn’t made it to the races yet, the colt had made a good impression in the sales ring where he sold for $460,000 to WinStar Farm and China Horse Club at the 2018 Keeneland September sale.

“Obviously, her babies had sold well and I knew that, at that time, Nashville was having a spell,” Holmes said of the mare’s appeal. “I had heard that he had ability and I knew he was at WinStar and having a spell there. I knew there was still hope.”

Nashville was pre-entered in both the GI Breeders’ Cup Sprint and GI Breeders’ Cup Big Ass Dirt Mile, but it was announced Monday he would instead target Saturday’s Perryville S. on the championship undercard.

Holmes said Nashville’s impressive victories, and more importantly his potential successes, will likely take his dam’s popularity to the next level in the sales ring.

“I think it’s huge,” he said of Nashville’s promise. “I’ve had mares before and sometimes they win a nice race, but with him, it’s just the way he’s done it. And then Elliott Walden said he’s one of the fastest horses WinStar Farm has ever had. I’ve been in the position before, but not with a horse with this much talent.”

“He was a horse who had won nearly $3 million, he was a good-looking horse that [Bob] Baffert trained,” Holmes said of the choice of matings. “I thought he was attractive at that price with his looks and his race record.”

Veronique’s weanling filly (hip 885) by Mastery will sell during Wednesday’s third session of the auction.

“She’s beautiful,” Holmes said of the weanling. “The man that works for us–he obviously owns half of her too–and we have four weanlings in the sale, but she gets the most grooming. Put it that way.”

The unraced Veronique is out of Styler (Holy Bull), a full-sister to GI Kentucky Derby winner Giacomo, and she is a half-sister to stakes winner Almond Roca (Speightstown) and graded placed Calistoga (Speightstown). She will be consigned to the November sale by Paramount Sales.

Holmes purchased Crystal Shard (Mr. Prospector) for $23,000 at the 2010 Keeneland November sale, also on behalf of a partnership of his farm workers. Her yearling colt at that time would go on to be GI Wood Memorial S. winner Gemologist. The mare was sold privately at a hefty profit.

Asked what another success would mean for his longtime employee, Holmes laughed and said, “I hope he shows up the next day.”

He continued, “There was another time there we bought a mare together and it was the dam of Gemologist. So he’s been on a bit of a home run, but after he sold that mare, the next night he was out there working overtime. But it could be a real life changer for him. They are nice people. So, hopefully. Could be.”