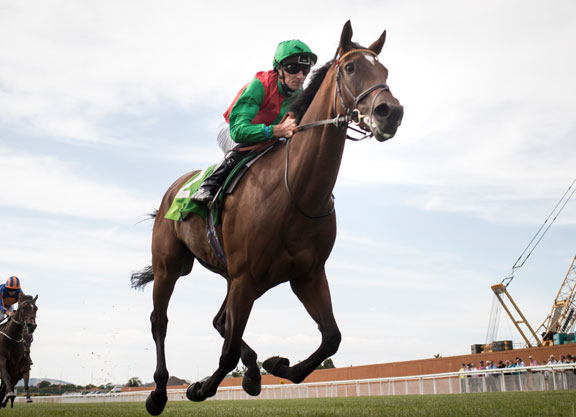 Sir Michael Stoute shows no sign of stifling his ambitions in his veteran stage as a trainer and Thursday's G1 Qatar Nassau S. sees his stable pitch another live contender into the big league as Veracious (GB) (Frankel {GB}) tackles Goodwood's G1 Qatar Nassau S. Labeled a 'TDN Rising Star' when beating the subsequent Listed UAE 1000 Guineas winner Winter Lightning (Ire) (Shamardal) by four lengths in a seven-furlong Newmarket maiden in October, Cheveley Park Stud's homebred missed the G1 1000 Guineas due to a setback and so was making her seasonal debut in Royal Ascot's G1 Coronation S. June 22. That was a very un-Stoute like move, but she rewarded his boldness by finishing third under positive tactics behind Alpha Centauri (Ire) (Mastercraftsman {Ire}) and Threading (Ire) (Exceed and Excel {Aus}). One more win here would bring Stoute alongside the late Sir Henry Cecil as leading trainer with eight wins and connections are hopeful. “I think her run at Ascot was above what we expected, to be honest. We were delighted with the performance and were obviously beaten by a special filly,” the Stud's racing manager Chris Richardson said. “Sir Michael did not want to tuck her in behind horses at Ascot and then find she was fighting for her head in the early half of the race, which is why we let her stride on. It wasn't the intention to set it up for anybody else, it was more the fact she had not raced for so long. The 10 furlongs will certainly give us other options if it all works out. As far as we can see on pedigree, she definitely deserves the opportunity over 10 furlongs.”

Fourth in the Coronation and 1 3/4 lengths behind Veracious was the G1 1000 Guineas heroine Billesdon Brook (GB) (Champs Elysees {GB}), who has vital course form having won a seven-furlong nursery at this meeting 12 months ago and the G3 Prestige S. over the same trip later in the month. “There are not many runners in the race and I think she will prefer going a mile and a quarter rather than a mile,” trainer Richard Hannon said. “She has had a nice break and we are very hopeful. I thought immediately after Ascot she wanted a mile and a quarter. She never looked like she was going to win at Ascot and I was a bit disappointed she didn't go whoosh like she can do.”

Of the older fillies, both the 2017 G1 Prix de l'Opera and this year's G1 Lockinge S. heroine Rhododendron (Ire) (Galileo {Ire}) and July 1 G1 Pretty Polly S. winner Urban Fox (GB) (Foxwedge {Aus}) offer stern opposition. The latter beat the G1 Epsom Oaks winner and subsequent G1 Irish Oaks runner-up Forever Together (Ire) (Galileo {Ire}) by 3 1/4 lengths in that 10-furlong Curragh feature and trainer William Haggas is hoping it will not prove a one-off. “It is a tough race, but it is nice to be involved and she has got a definite chance of adding to her win last time,” he said. It was a good effort in Ireland, but now she has got to confirm that performance. We hoped the step up in trip would bring out improvement and it turned out that it did.”

'TDN Rising Star' Wild Illusion (GB) (Dubawi {Ire}) drops back from a mile and a half after finishing runner-up in the Epsom Oaks and G2 Ribblesdale S. at Royal Ascot June 21 and trainer Charlie Appleby thinks that move is key. “I think that coming back two furlongs in trip is going to be ideal for her,” he commented. “She has progressed well from her races in June and has pleased me in her work.”

There is no stand-out in the card's G2 Qatar Richmond S., where Royal Ascot's G2 Norfolk S. could hold the answer especially after the fourth-placed Rumble Inthejungle (Ire) (Bungle Inthejungle {GB}) captured Wednesday's G3 Molecomb S. here. Ballydoyle's Land Force (Ire) (No Nay Never) was third and AlMohamediya Racing's Konchek (GB) (Lethal Force {Ire}) was fifth in that June 21 five-furlong test and they have both upheld that form subsequently. Land Force took the July 5 Listed Tipperary S., while Konchek was runner-up in the G2 July S. at Newmarket July 12. The latter's trainer Clive Cox said, “It was a great run in the July Stakes. He has come out of the race well. I hope the track will suit him fine here and I think he is progressive. I think we realised six furlongs was his trip last time. He showed plenty of pace in his early races and we ran in the Norfolk, but he definitely appreciated the step up to six in the July Stakes.”

Luca Cumani is on the brink of another big-race winner at a major UK festival and God Given (GB) (Nathaniel {Ire}) could be the one to provide it in the newly-upgraded G2 Qatar Lillie Langtry S. St Albans Bloodstock's June 9 G3 Pinnacle S. winner has yet to go as far as this 14-furlong trip, but she was coming back at Horseplay (GB) (Cape Cross {Ire}) all the way to the line in the July 7 G2 Lancashire Oaks also at Haydock last time. The re-opposing Precious Ramotswe (GB) (Nathaniel {Ire}) was 1 3/4 lengths behind in third and Cumani is optimistic. “I think she's still improving, she's a really progressive filly who has run in some good races this year,” he said. “I think the mile and six should be fine for her, so we are hoping for a good race. She won over an extended mile and a half in France last season on soft ground, so being another year older this year, you'd think she'd get it and the slightly softer ground than she's had this year also isn't an issue.” A fly in the ointment could be the deeply impressive July 4 Kempton novice stakes scorer Pilaster (GB). Another daughter of Nathaniel (Ire), Cheveley Park Stud's homebred is a half-sister to Windshear (GB) (Hurricane Run {Ire}) who was fourth in the G1 St Leger and she gets 11 pounds from the older fillies due to weight-for-age.