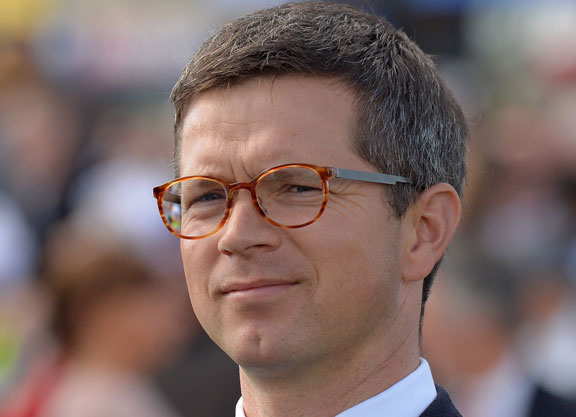 Newmarket conditioner Roger Varian will train the first foal out of G1 Prix de l’Arc de Triomphe winner Danedream (Ger) (Lomitas {GB}), a filly by Frankel (GB) named Nothing But Dreams (GB), according to GaloppOnline.de. Varian told that site, “of course it’s a great honor and privilege that I have been asked by the Shadai Farm to train Nothing But Dreams. She is the daughter of an Arc winner [by the] champion Frankel. She has been broken in and is currently undergoing light canters. Of course it’s early, but she has a good action and good character.”

Nothing But Dreams was bred by Shadai’s Teruya Yoshida, who bought into Danedream just prior to her Arc win.

According to Racing Post, Varian has two others from the first crop of Frankel in his stable: a half-brother to Postponed (GB) (Dubawi {Ire}), the winner of last year’s G1 King George VI and Queen Elizabeth S., and a 670,000 colt out of Model Queen (Kingmambo), a half-brother to Group 1 winner Regal Parade (GB) (Pivotal {GB}) and Group 2 winner Entifaadha (GB) (Dansili {GB}).