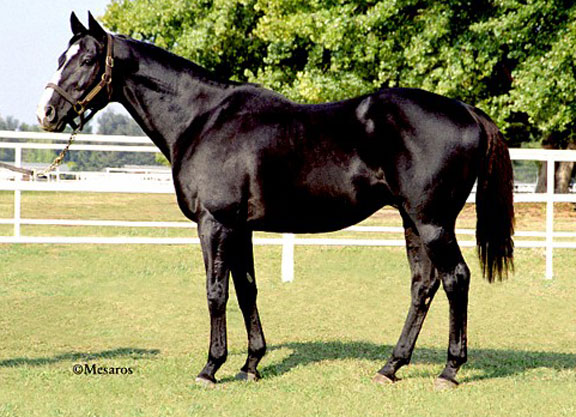 Top California sire Unusual Heat (Nureyev–Rossard {Dem}, by Glacial {Den}) has been pensioned from stud duties at the age of 26 and will enjoy retirement at Harris Farm.

“It is with great emotion that we have to announce the retirement of Unusual Heat,” said Harris Auerbach, managing partner of M. Auerbach LLC. “He's been remarkable and even in his final season at stud in 2016 managed to get 25 of 30 bred mares in foal. It's been an amazing run and I'm happy that 'Heat' can now just relax and enjoy the rest of his days just being a horse.”

A three-time SW and Group 3 runner-up during his European campaign, Unusual Heat has a brief U.S. campaign in California in 1996 and retired with a record of 16-6-2-2 and earnings of $142,605. The $250,000 BARMAR juvenile purchase is a son of Swedish Horse of the Year and Danish champion Rossard, a four-time Group 1 winner in Europe and heroine of the 1984 GI Flower Bowl H. on these shores.

Under the ownership of Madeline Auerbach and Barry Abrams, Unusual Heat stood the last six years of his stallion career at Harris Farms in Coalinga, C.A. His runners have amassed $52.4 million on the racetrack and he has sired 12 graded stakes winners, five of which were Grade I winners, and a total of 53 stakes winners.

Unusual Heat has on California Leading Sire six times and is responsible for 15 California champions, included two-time California Horse of the Year Acclamation, who won the Eclipse Award for top older horse in 2011 after winning five Grade Is that year. This year he was represented by speedy “TDN Rising Star” Pacific Heat, a three-time stakes winner who most recently captured Santa Anita's Evening Jewel S.

Unusual Heat may have only raced for Madeline Auerbach three times, but, through his success as a stallion and the inspiration he has provided her, the 26-year-old stallion has made a big impact on her life.

It is because of Unusual Heat that Auerbach has become one of the biggest proponents for Thoroughbred aftercare, starting the California Retirement Management Account (CARMA) and was a founding director of the Thoroughbred Aftercare Alliance (TAA).

“The truth about Unusual Heat is not only was he an amazing stallion and his progeny have earned an amazing amount of money, but because of the platform that he afforded me, he gave me the ability to gather the troops and get to work on Thoroughbred aftercare,” Auerbach said. “Based on him, because he gave me a voice I otherwise wouldn't have had and was such an amazing stallion, you get a lot of notoriety that comes with that and I was able to turn it into a lot of aftercare acitivities.”

The California resident continued, “I started CARMA. I'm a vice chair of the Thoroughbred Aftercare Alliance. I get a lot of opportunities because of him to speak to people and they pay attention to me. I guess they think because I was lucky enough to have him that they should listen to me. It's been amazing. I think that he as a racehorse as provided the impetus for aftercare for a tremendous number of horses. I'm very grateful for the opporunity and glad I was able to do that.”

Auerbach, who sits on the CARMA board as the Founders Chair and is still a Vice President of TAA, did not know anything about aftercare options until after she retired Unusual Heat in the late 1990s.

“I didn't know about aftercare until after I had [Unusual Heat] and got a lot of other really good horses,” Auerbach explained. “I got down the line to the point where it was time for them to be done with racing and some of them weren't suitable for the breeding shed. I began to look around and find out what was available to horses after they are done racing and, quite frankly, I was appalled. There was so no concerted movement. There was a place here and a place there. There were a lot of people doing a lot of very good work, but there wasn't a road map. There was nothing to help you. If you had a horse that needed to be retired you were pretty much on your own.”

The English native added, “We've seen a change in the last 10 years of activity and organizations that have grown up to be responsible and take care of these horses. I'm very proud to be a part of it. I'm proud of the industry response and I'm pleased that I was able to be useful in that response.”