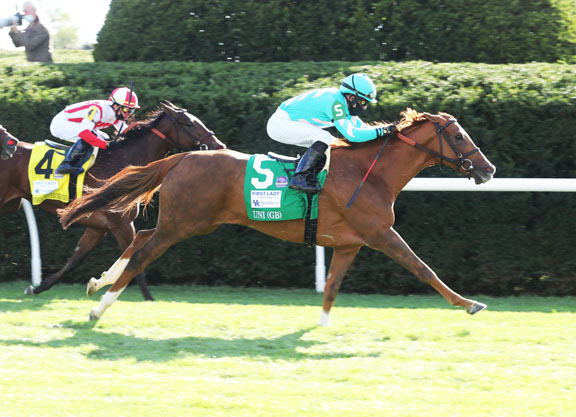 Given a 2-1 chance to atone for a pair of disappointing efforts as the chalk this term, the chestnut broke alertly and settled into third as her stablemate was forced to rate when longshot Crystal Lake (Distorted Humor) zipped off to lead. The Brown runners were both asked to quicken slightly after a :47.92 half, and Newspaperofrecord took the turn for home very wide, forcing her stablemate even further out into the course. A sprint for home figured to favor Uni over the typically front-running Newspaperofrecord, and the former kicked to the front in midstretch and widened her margin of victory to a length at the line. Beau Recall (Ire) (Sir Prancealot {Ire}) tagged the favorite for second, just like she had for the win in the GII Distaff Turf Mile S. last month.

“I was close,” winning rider Joel Rosario noted. “She was comfortable there, a couple of lengths behind Newspaperofrecord and the other horse in front of me, She's nice to ride, she's easy. Thanks to Chad Brown and all his people for the opportunity.”

A stakes winner in France as a sophomore, Uni was a graded winner Stateside at three, but blossomed and the end of her 4-year-old campaign when stringing together her fourth straight in Del Mar's GI Matriarch S. She picked up where she left off in Belmont's Perfect Sting S. last June, and was third behind fellow female Got Stormy (Get Stormy) and stablemate Raging Bull (Fr) (Dark Angel {Ire}) in the Spa's GI Fourstardave H. that August. She flew home from far back to take last year's First Lady, and duplicated that performance in the GI Breeders' Cup Mile at Santa Anita while leading home a one-two for the fairer sex ahead of Got Stormy.

Third in the GI Just a Game S. at Belmont June 27 behind Newspaperofrecord and Beau Recall, she left wondering if she was the same horse at six when seventh in the Fourstardave over yielding sod Aug. 22.

Co-owner Sol Kumin confirmed after the race that Uni would now attempt to defend her Mile title Nov. 7.

“I was so stressed out,” he admitted. “If she doesn't run well here, you couldn't run her back in the Breeders' Cup after the year she had. Now you run her back, same track, four weeks and you feel like she might be back. [Trainer] Chad [Brown] said her last two breezes, he felt like she was circling back to the form she had last year, so we were hopeful. But until you see it, you just don't know. Just an incredible filly.

“Her last race for us will be the Breeders' Cup against the boys and if she is able to do it again, it would be Hall of Fame good.

“I'm just so happy. This year was tough. When you bring these horses back at this age, you sort of question yourself of 'did we do the right thing?'. She seemed like she had been doing well the last couple of months so we felt like we did the right thing. Today obviously you feel like we did right by her. Hopefully she can give us one more big effort. If not, she's given us everything we could have ever asked for.”

Uni is slated to be offered by ELiTE Sales at Fasig-Tipton's “Night of the Stars” on the day after the Breeders' Cup.

Pedigree Notes:
It has been a productive weekend at Keeneland for international super sire More Than Ready, who was also responsible for the dam of Friday's GI Darley Alcibiades S. heroine Simply Ravishing (Laoban). Uni has a yearling half-brother by Almanzor (Fr).