Uni and Got Stormy Meet Again in Fourstardave 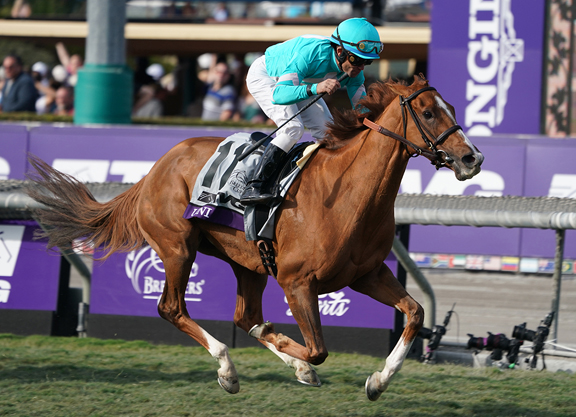 Champion Uni (More Than Ready) and MGISW Got Stormy (Get Stormy) continue their rivalry Saturday as they look to continue dominating their male counterparts in Saratoga's GI Fourstardave H.

The two chestnuts met for the first time in last year's renewal of this event, in which Got Stormy was a 2 1/2-length victress over the re-opposing Raging Bull (Fr) (Dark Angel {Ire}) with Uni in third. After that Got Stormy went to the GI Woodbine Mile, hoping to follow in the famous hoofprints of fellow Mark Casse trainee Tepin (Bernstein), but came up a half-length short. Meanwhile, Uni went to Keeneland, where she scored a decisive victory in the GI First Lady S. in October.

The pair met again at Santa Anita in the GI Breeders' Cup Mile Nov. 2 and this time Uni got the better of her rival, storming home to a 1 1/2-length triumph over Got Stormy with stablemate Without Parole (Frankel {GB}) in third. Clinching the Eclipse Award for top turf female with that win, Uni made her first start of the season at Belmont June 27, completing the trifecta behind her talented younger stablemate Newspaperofrecord (Ire) (Lope de Vega {Ire}).

“She missed some time with a splint issue, and we stopped breezing for five or six weeks,” said Bradley Weisbord of BSW/Crow Bloodstock, who manages Uni on behalf of her owners. “The ground might have been a little soften the Just a Game and Joel didn't think she got through it great, but she was short, and she really needed the race. She just had her best breeze of the year last week and we weren't completely sure about this race. We were 50-50 between the Fourstardave and the [GII] Distaff Turf Mile at Churchill, but the breeze is what gave Chad the confidence to run her, so she's sitting on go.”

Got Stormy, on the other hand has made five starts since the Breeders' Cup, closing 2019 with a win in the GI Matriarch S. Dec. 1. Fourth in the GIII Endeavour S. at Tampa Feb. 8, her best effort so far this season was a close second in the GI Frank E. Kilroe Mile Mar. 7. The Gary Barber colorbearer checked in fourth in her last two outings at Belmont in the June 3 GIII Beaugay S. and the July 4 GIII Poker S.

“She's training well and she's back to Saratoga, which is where she did her best running last year, so we're hoping for the best,” Casse said. “We know she likes that course, we know that she likes firm turf. She's got to come with her A game. She's the same horse, she looks great and trains great. She's just been a little bit unlucky. She ran over some good turf courses and she wants it to be really firm.”

Raging Bull kicked off this term with a win in the GI Shoemaker Mile S. at Santa Anita May 25 and was a close third behind Classic winner War of Will (War Front) in Keeneland's rescheduled GI Maker's Mark Mile July 10.