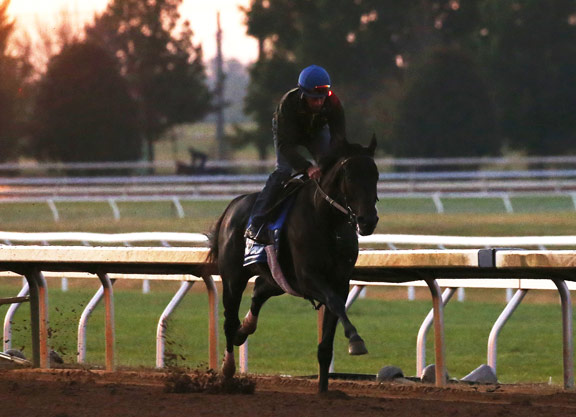 Maxfield's stall sits across from Barn 42's office, where trainer Brendan Walsh can keep a close eye on his star pupil at his Keeneland base. It's been a whirlwind of an early career for the Godolphin-owned colt, but he is now primed to make his sophomore debut this Saturday in the $150,000 GIII Matt Winn S.

The son of Street Sense launched his juvenile season last year by breaking his maiden on debut before going on to take the GI Claiborne Breeders' Futurity by over five lengths. But then three days before the Breeders' Cup Juvenile, an ankle chip forced him to scratch. Back into training this spring upon recovery, a worldwide pandemic made it questionable for a Kentucky Derby to happen on the first Saturday in May.

“It would be just my luck that the year I have a top Derby contender, there is no Derby,” Walsh joked.

While a Kentucky Derby moved to September may have been problematic for other three-year-olds primed and ready for spring, the biggest beneficiary may have been Maxfield.

“I think it worked to our advantage, for sure,” Walsh said. “Every bit of time this horse gets, the better for him.”

While Walsh said that Maxfield might have been ready for a Kentucky Derby in May, the pushed back date certainly took some pressure off.

“We could have possibly had him ready in May,” he said. “But we might've had to do it in a slightly unorthodox way, and then of course you may be a little concerned about if you're doing the right thing by the horse. With this, we've been able to give him as much time as we needed.”

Since the announcement of the untraditional Derby date, Walsh has relocated from his Palm Meadows base to Keeneland, and has formed a new game plan for his undefeated colt.

“We backed off of him while he was traveling to Kentucky and gave him about three weeks without works,” Walsh said. “But he's had a great run of works since. We've been able to do pretty much everything that we wanted to do with him.”

Two weekends back, Jose Ortiz, who was aboard for both of the colt's wins, made the trip to Lexington to breeze Maxfield from the gate. The duo clocked five furlongs in :59:2.

“I was delighted that Jose was able to get a feel of him after he hadn't been on him since last year,” Walsh said. “He was really pleased with what he saw.”

Last weekend, Maxfield worked another four furlongs in :47:2 in preparation for his next start.

Walsh said that he hopes to see a reflection of Maxfield's morning works on Saturday.

“I hope we see what he's been showing me in his works,” he said. “All of last year was really a bonus, we were always looking towards his three- and hopefully four-year-old year because he was always a horse that was going to get better with some more physical maturity. So from what he's been showing me, I'd like to see some confirmation and see that he has advanced. Like most of my horses will do, he'll improve farther along.”

Walsh's team has been working on improving Maxfield's break from the gate since his return this year.

“Before we ran him last year, I never thought he was a particularly slow gate horse,” Walsh said. “But in his two races, he tended to break a little slow. He broke really well the day Jose worked him, so maybe he'll break a little quicker. We're not going to force him to do anything, but maybe he will and it'll just make life a little easier on him. But he's a very easy horse to ride. He can rate; he can do whatever he needs to do. So I'll leave it to Jose, I think.”

Maxfield and Ortiz will break from the 10 position under the Twin Spires, facing a field of 11 other three-year-olds.

Entries include Ny Traffic (Cross Traffic), who ran second behind Wells Bayou (Lookin At Lucky) in his last start in the GII Louisiana Derby, the Dale Romans trainee Attachment Rate (Hard Spun), who ran third in this year's GIII Gotham S. before going on to place second in a stakes at Gulfstream on April 25, as well as Major Fed (Ghostzapper), who placed second in the GII Risen Star earlier this year.

This edition of the Matt Winn S. will offer qualifying points for the Kentucky Derby, with the winner receiving 50 points, and the next three finishers receiving 20, 10, and 5 points respectively.

Walsh said, “I think it's a great place [for Maxfield] because we don't have to ship him too far. It's nice to get a run into him over a track that we know he likes, and hopefully we'll have another race for him in September over this track as well.”

Earlier this week, Walsh led Maxfield outside for a quick grazing session as the van pulled up to make the trip to Louisville. Between pats and final once-overs, Walsh proudly commented on his protégé's bright coat, his improved muscling, and impressively sound mind.

“He's doing as well as he can do,” he said with a smile. “He's about as ready as we can have him off the bench.”