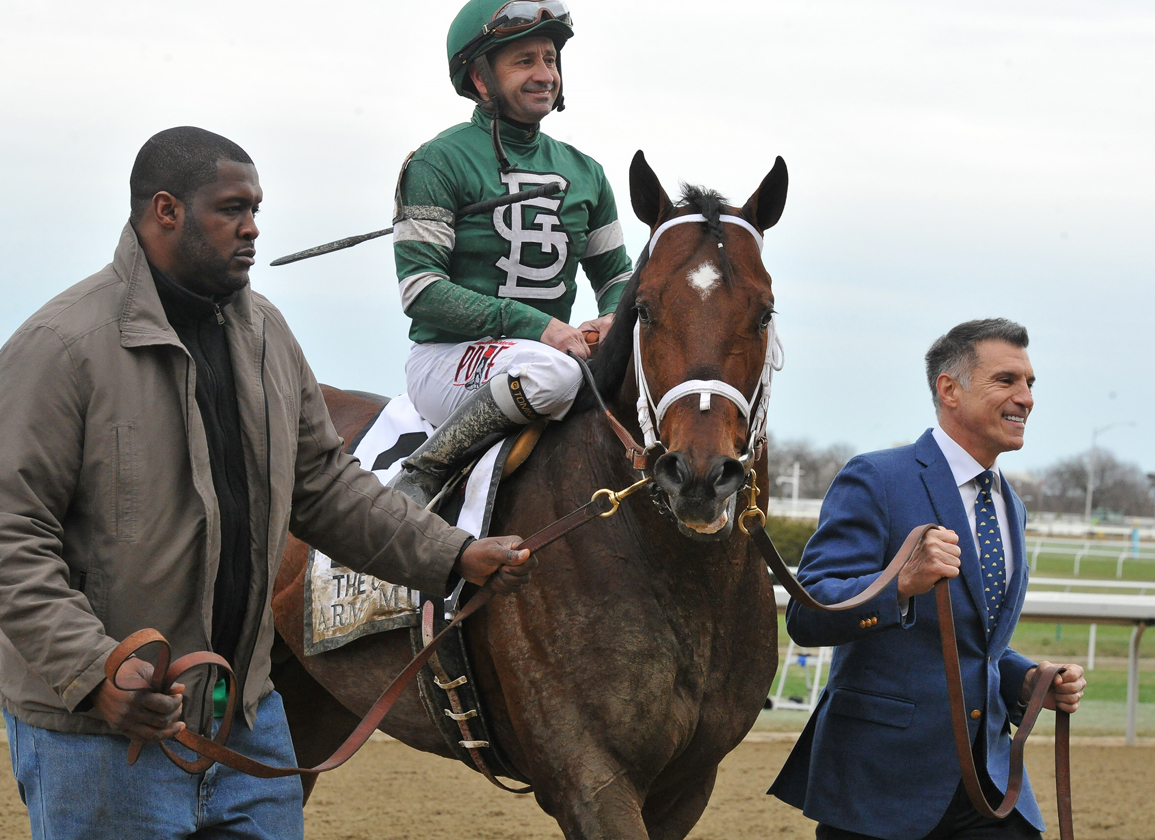 St. Elias Stables has been a strong supporter of their undefeated, Grade I-winning stallion Army Mule as his first yearlings go through the sales ring. | Sarah Andrew

The first yearlings from GISW Army Mule (Friesan Fire-Crafty Toast, by Crafty Prospector) may have surprised a few people when they proved to be a hot commodity at the first three major yearling sales of the year.

Army Mule began his stud career in 2019 at Hill 'n' Dale Farms with a modest $10,000 stud fee after just three career starts, but at this year's Fasig-Tipton Saratoga Sale, two representatives from his first book of mares brought $400,000-first a colt out of stakes winner Made Me Shiver (Maclean's Music) and then a successfully-pinhooked half-sister to GISW Volatile (Violence). A few days later at the Fasig-Tipton New York Bred Sale, the half-sister to GIISW Wells Bayou (Lookin At Lucky) brought $300,000.

Already this year, 16 of 22 Army Mule yearlings have sold to average $164,375. Despite his unassuming $7,500 stud fee today, Army Mule is one of six members of his stallion crop to have surpassed a $150,000 yearling average heading into the Keeneland September Sale.

“All the right people like the horse,” said Hill 'n' Dale's John Sikura. “I've heard a lot of very good comments from people who really pay attention, so I think there's a very good buzz. We try to be realistic but in the end, the genetic switch is on or it's off. You need the volume of foals on the ground, you need to raise them as well as you can and then they'll either run or they won't. He's poised for success and hopefully they'll be as successful as he was on the racetrack.”

According to Sikura, the key to Army Mule's recent achievements has been the support from Hill 'n' Dale and the young stallion's other shareholders.

“I like to take the approach that when we like a horse, we go all the way,” he explained. “We like to think that we're on board and we're helping drive the success rather than be passive and just passengers in seeing if they can run. If you keep that confidence throughout, it exudes to when people call and ask about the horse. To ensure his success, we bought mares at auction for that purpose. St. Elias has been a great partner and Craig Bernick, through our Elevage partnership, also owns an interest in the horse.”

St. Elias Stables, who campaigned Army Mule through his Grade I-winning career, was a force to compete with when an Army Mule yearling was in the ring at the two recent Saratoga sales. The racing operation of Vinnie Viola purchased both the aforementioned $400,000 yearlings at the Select Sale and the colt out of Made Me Shiver was bought in partnership with West Point Thoroughbreds. Days later, St. Elias took home another pair of Army Mule yearlings at the New York Bred Sale, purchased for a combined $285,000.

Jacob West, who acted as agent for St. Elias in their four new purchases, said Viola had been keen on landing a few Army Mule yearlings as they were preparing their Saratoga shopping list. 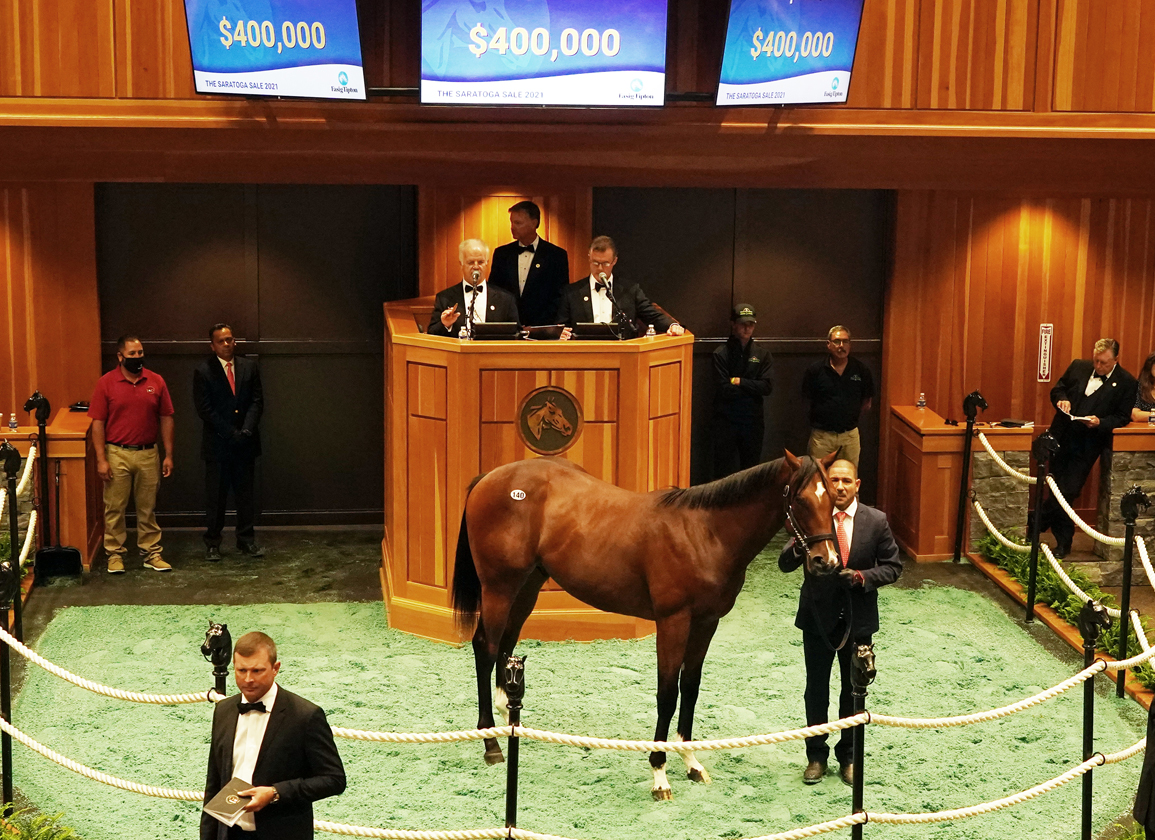 Army Mule colt out of SW Made Me Shiver fetches $400,000 at the Fasig-Tipton Saratoga Sale. | Fasig-Tipton

“Vinnie gets behind a lot of his horses that go to stud, but with Army Mule in particular, he was as brilliant as a racehorse could be,” West said. “When you've raced a horse,  he goes on to be a stallion and you get to follow them along in their careers, it's hard not to be biased and go out and support them. But [the two Select Sale purchases] stood on their own merit. We paid $400,000 for them and obviously if we weren't there to buy them, someone else would have bought them within the $300,000's. I think that speaks volumes to what the market thinks of Army Mule and the chance he has.”

While the son of Friesan Fire is making headlines this summer with his yearlings, it was just last year that he could only fill a book of 47 mares in his second season at stud.

“Army Mule is a horse that, initially, there was maybe a little bit of resistance against,” Sikura admitted. “People talked about Friesan Fire, but when you peel the layers of the onion, you see that Friesan Fire is by A.P. Indy and that his dam was a champion in Australia. She is by Dehere and [his sire] Deputy Minister is hugely influence both as a broodmare sire and a sire.”

Sikura may not be overly surprised that buyers have been impressed with Army Mule's yearlings physically. He noted that Army Mule himself is a picture of a horse.

“I remember Donato [Lanni] was telling me, 'You wouldn't believe this horse. He's the best horse in the sale,'” Sikura recalled. “He was going on and on about this Friesan Fire horse that was an absolute complete freak and little did I know until after the fact that it was Army Mule.”

Trained by Todd Pletcher, Army Mule broke his maiden on debut at Belmont, defeating the rest of the field by 8 1/2-lengths and earning 'TDN Rising Star' status. He followed up that effort the following year at four with a 7 ½-length romp at Gulfstream and crossed the wire just :0.75 off the track record. In his stakes debut in the GI Carter H., the speedy bay drew away from the field in the stretch to win by over six lengths and earn a 114 Beyer Speed Figure. He was forced to retire soon after due to a chipped knee. 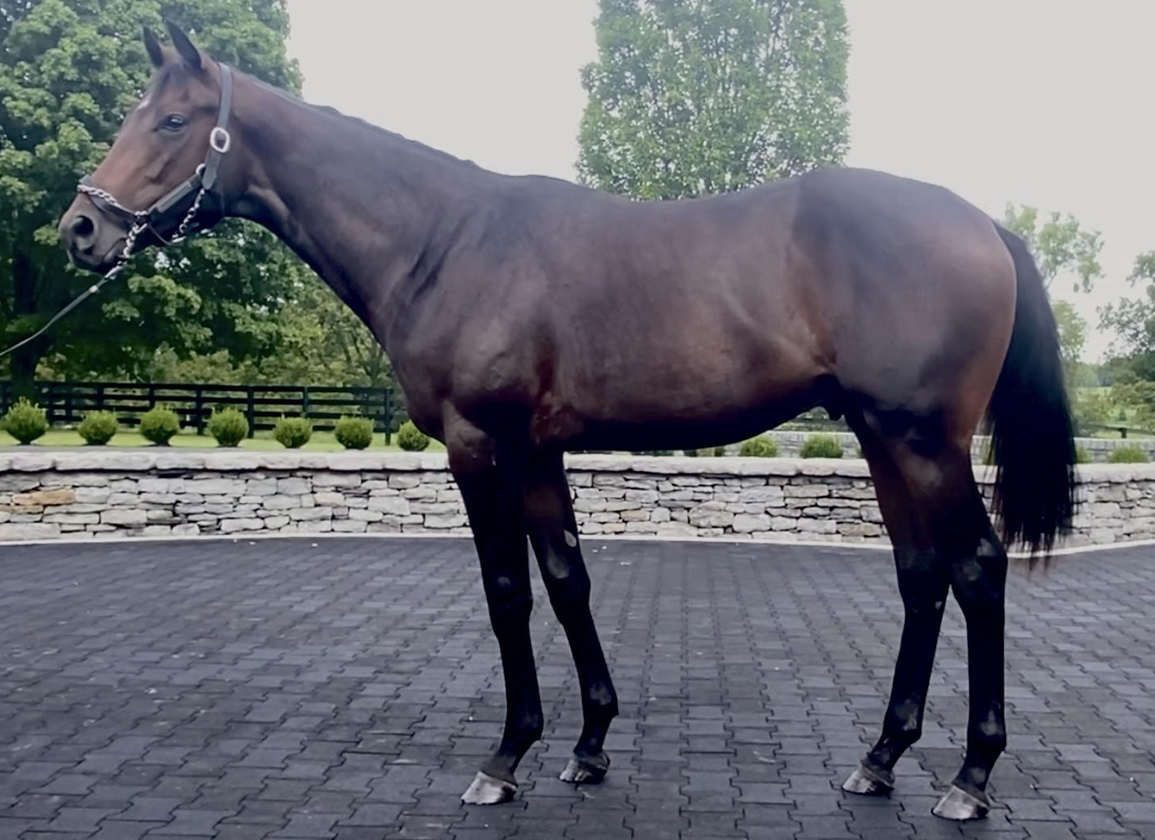 “I think that horses either show ability or they don't,” Sikura explained of their decision to stand Army Mule. “It's unfortunate that horses are running very fast and sometimes, of no fault of their own, they get hurt. If a horse can be brilliant and have near track-record performances in their first three starts, think of how much untapped talent is still left with a horse like that. If you're brilliant and the fastest horse in training in your first couple of starts, I think that's a great indicator of immense quality.”

Army Mule looks to continue with his accomplishments in the sales ring at the Keeneland September Sale. The first-crop sire has 25 yearlings cataloged for the upcoming auction.

Sikura said that the type of yearling his offspring represent should appeal to a wide array of demands within the marketplace.

“I think they're more of a Mr. Prospector type,” he said. “They're medium-sized, very fast-looking, very round and with lots of bone. It's what the pinhookers want and it's what the commercial market wants–quality, early speed that sustains.”

Sikura added that he wouldn't be surprised if Army Mule's yearlings are tough to get ahold of next year once his first group of runners hit the racetrack.

“Just think of the many brilliant racehorses, like Candy Ride (Arg), Maclean's Music and Constitution, that as soon as their first crop ran, their stud fee tripled or quadrupled immediately,” he said. “Any time you get in on them in the beginning and you buy before the entire public is aware of the horse, you have great value and you have a chance to buy a really good horse for a lot less that you would the next year should they be successful.”

West is also looking forward to the Keeneland September Sale, where he says he will be scouring the sales grounds for more promising yearlings from Army Mule.

“He was an incredibly fast horses and all three of his races were basically jaw-dropping performances,” he said. “He fits the mold of what John Sikura and Hill 'n' Dale have done with standing stallions that showed brilliancy. From the weanlings we saw in November to the yearlings we see now, he looks like he's passing along his athleticism and his conformation. We're pretty excited about them and are excited to see what the September catalogue has to offer. Hopefully he's the next big stallion out there.”