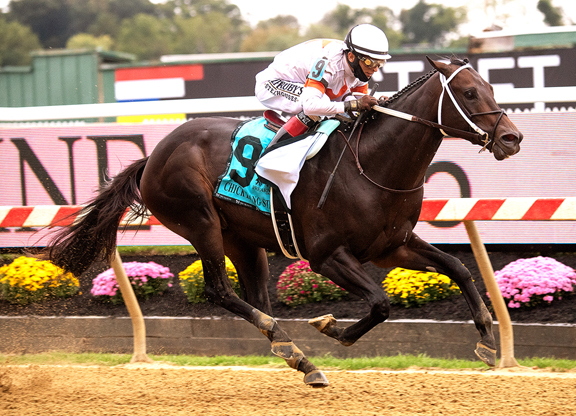 The 3-5 favorite blasted out to the front from his outside draw, and was ridden along by John Velazquez to hold a narrow advantage. He began to shake free as they straightened for home and wasn't for catching in the stretch, rolling to a four-length victory.

“Put him on the lead and keep him on the lead, and he keeps running,” Velazquez said. “You've got to ride him the first part. For the first three-sixteenths of a mile, I had to ride him just to keep his head on the business. Even at the three-eighths pole I am reminding him, 'Hey, keep your mind on your business.' Then when he switched down the lane, he knew. It was 'OK, time to go.'”

The winning time of 1:09.10 for six furlongs matched Lantana Mob from 2008 for the fastest in stakes history.

Yaupon, a narrow debut winner at Churchill Downs June 20, took his game to the next level in his next two starts at Saratoga this summer, adding an allowance over older horses July 18 and the Amsterdam, with Beyer Speed Figures of 101 and 100, respectively.

The dual-graded winner Yaupon is one of 38 such winners for Uncle Mo, whose 67 black-type winners from six crops to race have him positioned in third among North American sires for 2020. Yaupon, a $255,000 OBS June acquisition (:10), is out of a Vindication mare in Modification, and Uncle Mo has crossed well with the Seattle Slew sire line previously. The Indian Charlie stallion also has the listed Canadian black-type winner Absolutely Stylish out of a Vindication mare, and has three stakes winners out of another Seattle Slew son in Bernardini: Mo Town (GI), Mopotism (GII), and Modernist (GII). Yaupon is also the second graded runner out of Modification, whose Sawyer's Hill (Spring At Last) was second in both the 2014 GII Del Mar Derby and GII Twilight Derby. Her yearling filly by American Pharoah brought $1.2 million from Mike G. Rutherford at the recent Keeneland September sale. The mare, who is a half-sister to GSW Sky Alliance (Sky Classic), delivered a colt by Good Magic this year. She was bred back to Uncle Mo for 2021.