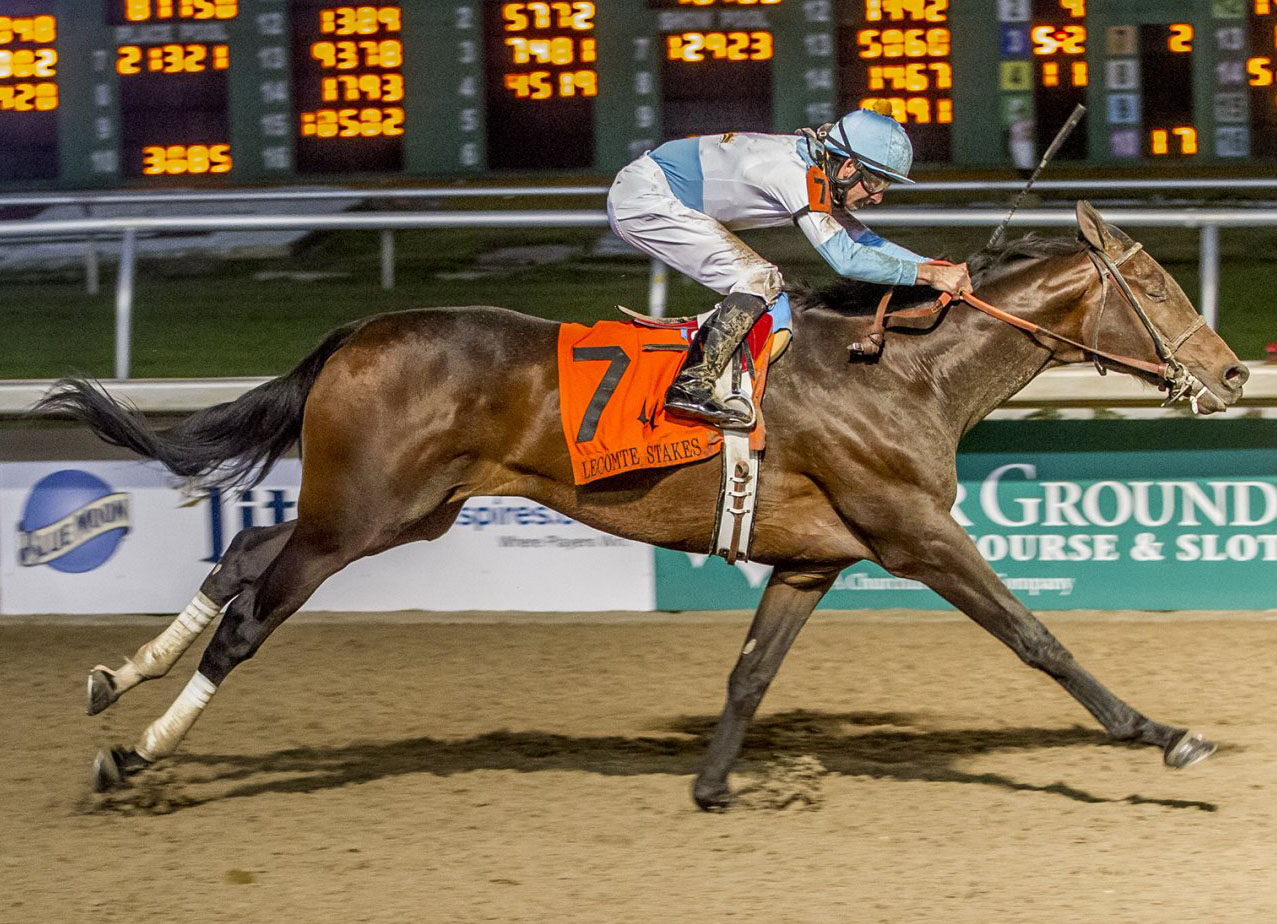 Mo Tom (Uncle Mo), a rallying third in the GII Kentucky Jockey Club S. at Churchill Nov 28, led home a G M B Racing-owned exacta with a powerful come-from-behind decision in Saturday's GIII Lecomte S. at Fair Grounds. Tom's Ready (More Than Ready) was second. The pair also finished one-two in Churchill's Street Sense S. Nov. 1. G M B Racing is the nom de course of Gayle Marie Benson, wife of New Orleans Saints and New Orleans Pelicans owner Tom Benson. “I'm sure [jockey] Corey [Lanerie] would agree, when the distance gets further, the better our horse is going to get so we're really excited about that,” winning trainer Tom Amoss said. “I have to say Gayle Benson has been great, she's a great owner and she gets a big assist from her partner Tom Benson. We're really pleased, they're both New Orleans natives–we're really happy.”

Mo Tom broke somewhat okay despite hitting the gate at the start, then bumped soundly with a rival nearing the first turn. Seemingly undeterred from his early woes, he raced one from last while saving all the ground through fractions of :23.64 and :47.30. Guided off the fence on the turn for home, he began to wind up from the back of the pack. Tipped to the extreme outside down the stretch, he came charging down the center of the course in impressive fashion to punch his ticket to the GI Kentucky Derby trail in style.

“It was good, he broke really good and got pinched a little bit going into the first turn,” Lanerie said. “We got knocked a little off stride there, but he gathered himself up really good. Down the backside I was pretty confident, especially when I called on him to get in a little bit better position. On the middle of the turn I was going to try to maybe weave my way through but I had so much horse I said, 'let me just put him in the clear.'”

A narrow maiden winner at first asking at Ellis Park in September, Mo Tom was third in a six-furlong Keeneland allowance Oct. 8 before besting Tom's Ready by a length in the Street Sense. After leading just one rival through the opening half-mile of the Kentucky Jockey Club, Mo Tom came with an inside rally into the stretch and finished third behind Eclipse finalist Airoforce (Colonel John) and subsequent GI Los Alamitos Futurity winner Mor Spirit (Eskendereya).

Mo Tom's dam Caroni, a half-sister to MGSW Kashatreya (Daring Groom), had a filly by Harlan's Holiday in 2014; a filly by Tiznow in 2015; and was bred back to Pioneerof the Nile.