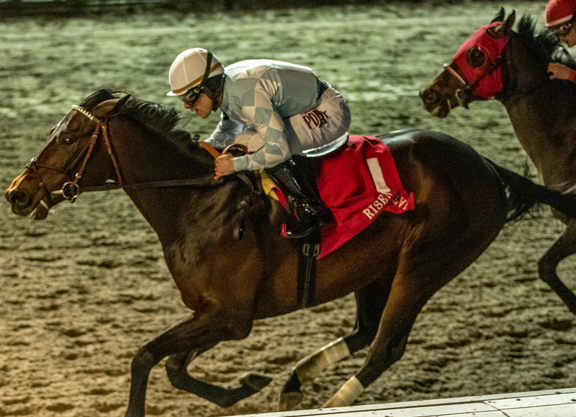 Twelve months ago in the GII Risen Star S., the Bill Mott barn was represented by Country House (Lookin At Lucky), who was having his fourth career run and was exiting a maiden-breaking victory going two turns for the first time. Seeking to improve on that now-retired runner’s second-place effort a year ago, Modernist (Uncle Mo) argued the pace from the inside and fought his way to a 12-1 upset over Major Fed (Ghostzapper). Ny Traffic (Cross Traffic), who battled up front with Modernist clung on for third, while even-money Anneau d’Or (Medaglia d’Oro) flopped in his 3-year-old bow, finishing a never-in-it ninth.

Popped away from gate one by Junior Alvarado, Modernist was prominent, but only third with a circuit to travel, as Ny Traffic had the superior early speed from his outside barrier. But before the latter had the opportunity to get down to the fence, Alvarado used just enough gas to slide up underneath Ny Traffic and the battle was joined. The half-mile fraction of :48.57 was identical to that of the first Risen Star division and the duo raced heads apart into the final 3 1/2 furlongs, with Modernist hard-ridden, but doing slightly better of the two into the lane. Drawing about a length clear into the final eighth of a mile, Modernist was kept to his task and found the line first.

The disappointment of the race was clearly Anneau d’Or, who was forced a bit wide into the first turn by Liam’s Lucky Charm (Khozan) and was deepest down the back. He came under heavy pressure while wide leaving the three-eighths and faded tamely to be nearly 13 lengths adrift at the wire.

A debut fifth sprinting at Belmont Sept. 28, Modernist was a staying-on third over Aqueduct’s one-turn mile Dec. 7 and most recently annexed a nine-furlong maiden by four lengths Jan. 25. For his part, Country House was ninth debuting at 8 1/2 furlongs on turf and was runner-up in a one-mile Aqueduct maiden before graduating first time long at Gulfstream in his third start.

“He won at a mile and an eighth in New York and has progressed really well in this early part of his 3-year-old year,” said Mott. “He’s become more mature and has been more professional about everything. I couldn’t be more delighted with how he acted in the paddock and post parade. I told Junior (Alvarado, jockey) to take advantage of the one hole. The horse handled everything really well.”