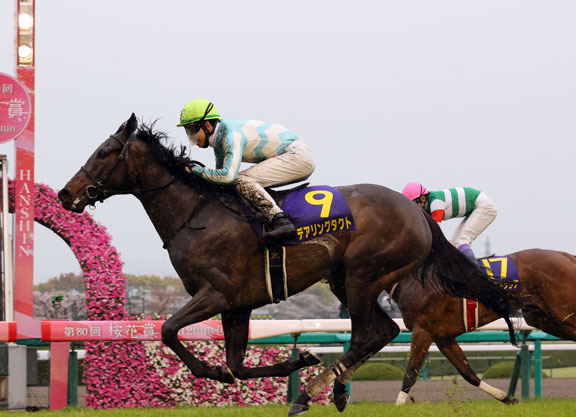 Daring Tact (Jpn) (Epiphaneia {Jpn}) had shown potential for brilliance prior to Sunday's G1 Oka Sho (Japanese 1000 Guineas), breaking her maiden in her lone start at two and winning the Listed Elfin S. in February by four lengths, and the first-crop daughter of G1 Japan Cup and G1 Kikuka Sho winner Epiphaneia followed through on that promise on Sunday with a win in the nation's first Classic of the season. Daring Tact is the first filly in 40 years to win the Oka Sho in just her third start, and the seventh filly to win the race while unbeaten.

Racing well out of it and on the rail early in the driving rain at Hanshin, Daring Tact moved to the outside of rivals rounding the final turn and had a good 10 lengths to make up at the top of the stretch. Meanwhile up front, race favourite and champion 2-year-old filly Resistencia (Jpn) (Daiwa Major {Jpn}) managed to wrestle the lead from the front-running Smile Kana (Jpn) (Deep Impact {Jpn}) for a stride or two, but by that point the race had clearly taken its toll. Daring Tact swept up alongside and past those two tiring fillies to post a 1 1/2-length victory under a hand ride. Jockey Kohei Matsuyama said, “I concentrated on her rhythm more than where to position her today. We were far behind the leaders and desperate in catching up but she responded beautifully and stretched incredibly all the way to the line. I'm not worried about the added distance in the coming Japanese Oaks, but she does have issues to work on such as being relaxed.” Japanese racing has continued behind closed doors for the better part of 10 weeks, with even stricter sanitary measures enacted last week after Japanese Prime Minister Shinzo Abe declared a state of emergency. Matsuyama added, “I'm praying that the day we can race in front of the crowd again will come soon.”

Daring Tact is the first stakes winner for the 2013 G1 Kikuka Sho and 2014 G1 Japan Cup winner Epiphaneia, who was the world's top-rated distance horse in 2014 and who stands at Shadai Stallion Station. She is the second foal out of the unplaced Daring Bird (Jpn) (King Kamehameha {Jpn}), who has a 2-year-old full-sister to Daring Tact. The second dam is Group 3-winning Daring Heart (Jpn) (Sunday Silence), who is a half-sister to GI Super Derby winner and leading Korean sire Ecton Park (Forty Niner).