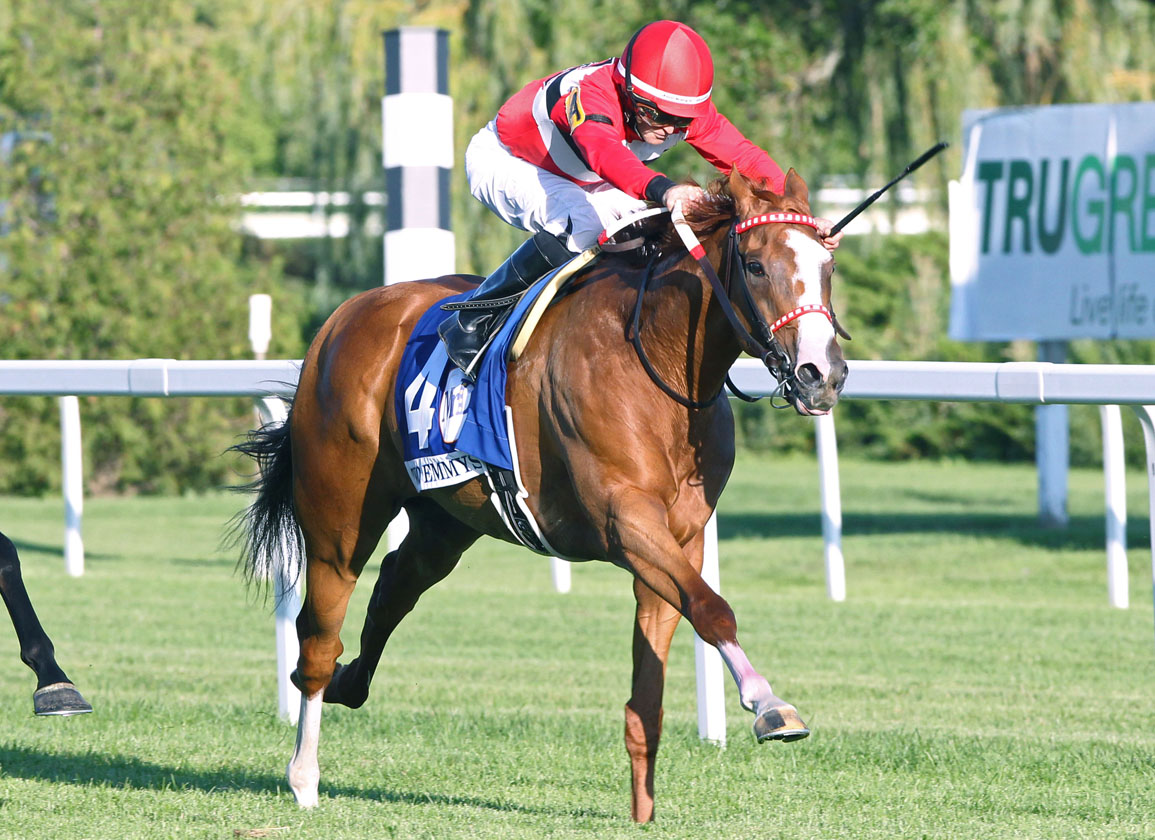 ARLINGTON HEIGHTS, IL–Hugh Robertson has started close to 10,000 horses in a journeyman career, but celebrated his biggest–and likely most bittersweet–victory when Two Emmys (English Channel), a 5-year-old gelding he also owns in partnership, went wire-to-wire to cause a massive upset in Saturday's Mister D. S., ostensibly the final Grade I race to be run at historic Arlington Park.

“I never thought I'd have a horse in the Million, and then when I do, it's not a million [dollars],” the long-time Chicago-based conditioner told TVG's Scott Hazelton following his neck defeat of Domestic Spending (GB) (Kingman {GB}). “It's nice,” he said, before speaking for many a horse racing fan by saying, “but I wish they'd keep running.”

As it stands, that is not happening. Arlington did not apply for racing dates for 2022 and parent company Churchill Downs is in the process of reviewing bids for the property located in the northwest suburbs of Chicago, about 20 miles away.

The money poured in for Domestic Spending, looking to give trainer Chad Brown a fourth straight 'Million' and the gelding was off as the 2-5 chalk. Two Emmys veered a bit to his right at the start, but James Graham righted the ship and the duo made it to the front easily, as Bizzee Channel (English Channel) and Strong Tide (English Channel) gave chase through an opening two furlongs in a dawdling :26.12. Flavien Prat had Domestic Spending handier than is his custom, no surprise given the lack of pace, while Armory (Ire) (Galileo {Ire}) was ridden back in the field by Ryan Moore and raced without the benefit of cover into the first turn.

Two Emmys expended no energy whatsoever down the Arlington backstretch, getting the half in walking time of :52.43 before upping the tempo somewhat past six furlongs in 1:16.64. Committed for home from there, Two Emmys was asked for his best in upper stretch and had just enough in the tank to hold off the late challenge of the chalk, who finished the race on his incorrect lead while gaining inches late.

“I knew he would go that far, but they let him go a really soft pace and he's a tough horse,” said Robertson, whose most noteworthy runner was Polar Expedition, a five-time graded winner, including the 1993 GII Breeders' Futurity S. and 1994 GII Jim Beam S.

Added the winning rider: “When I didn't see anyone behind me at the quarter pole, I knew they would really have to run to catch me. He's shown he can do it before and he did it today.”

It was the fifth Grade I for the Irishman, who won the Central Bank Ashland S. aboard Karlovy Vary, the dam of GI Beverly D. S. runner-up Mean Mary, back in 2012.

A maiden winner for $20,000 at this venue two summers ago on the synthetic track, Two Emmys won one of his four starts over the winter at the Fair Grounds and closed that segment of his campaign with a runner-up effort to Colonel Liam (Liam's Map) in the GII Muniz Memorial S. in March. Given a three-month freshening, he resumed with a runner-up effort behind Bizzee Channel in a local third-level allowance June 19 and made most of the running in the GIII Arlington S. July 17, surrendering late to drop a neck decision to Bizzee Channel.