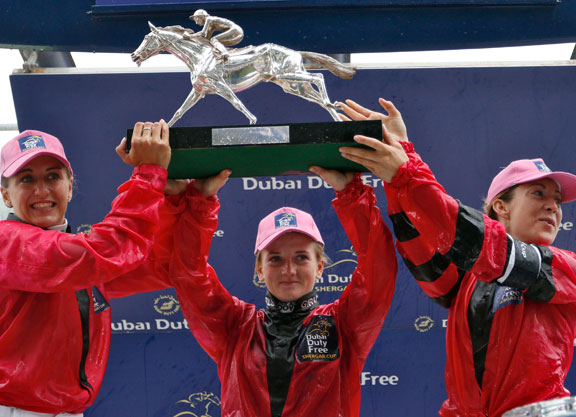 The popular Shergar Cup jockeys' competition is staged at Ascot on Saturday, and Hayley Turner, captain of the Girls Team, is looking forward to defending her Silver Saddle crown for leading rider at the fixture as well as the team title.

“I love it, it's like waiting for Christmas,” Turner told Sky Sports News. “I just enjoy it so much and I don't know why, it's just something a bit different and it's good fun. I had a good year last year and having the team event, while we ride as individuals, you keep an eye on everyone else as well.”

“I was speaking to licensing and I think Nanako Fujita is going to be able to claim, which is great in the big handicaps,” Turner said. “She's had 92 winners so she's very nearly a professional over here, but she's not so that's a big advantage.

“I've seen Jamie ride in Australia and she's doing really well. It will be a good experience for them both,” Turner added. “Riding at Ascot will be different to the tight, turning tracks they have and they'll be up against Danny Tudhope, Jamie Spencer and Tadhg O'Shea, who have ridden it loads of times. I'll hopefully get chance to walk the course with them and give them a bit of advice.

Kah said she is looking forward to the experience.

“It's a privilege to ride in England and at Ascot,” she said. “I watch Royal Ascot on TV, it's big back home, and I watched Hayley ride a winner there this year which was pretty cool. I'd love to ride at Royal Ascot one year. Hopefully this kicks off and I can come back next year.”

Kah isn't the only Australian competing on the card, with Mark Zahra joining the Rest of the World team with Hong Kong's Vincent Ho and Japan's Yuga Kawada.

“I'm very excited, I've never ridden here before but it's a great concept,” said Zahra. “A few of my great friends have ridden in this in previous years, so I can't wait. I came two years ago as a spectator to Royal Ascot, but now I'll be on the other side of the fence. It's a great course so it should be a lot of fun.

Ho added, “To represent Hong Kong as part of the Rest of the World team is a huge honour. I was at Ascot as a spectator when Enable won the King George two years ago, but riding there has always been an ambition of mine and I want to go there fully prepared.”