GK: Prince Faisal has enjoyed incredible success in the bloodstock world over the years, which includes breeding and racing Invincible Spirit (Ire). Where does this victory rank?

TV: I think being on his home dirt, as it were, I would have to say Mishriff has made Prince Faisal a very proud man. Having named him after one of his closest friends soon after his death, and having named a horse Mishriff in the past who broke down, for Mishriff to win in front of his family in his homeland was a thrill he will never forget.

GK: Could you tell us a little bit more about Prince Faisal's breeding operation?

TV: He has 11 mares which all board with me at our farm in the village of Eydon, England. 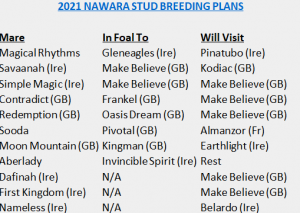 GK: It was such a fantastic performance, beating two of America's best dirt horses in Charlatan and Knicks Go. Should we expect to see him running this summer and autumn in America?

TV: The racing programme hasn't been discussed by John Gosden and Prince Faisal yet, but I know that the G1 Juddmonte International at York, which throws up some of the best horses every year, would be dear to Prince Faisal. To add a domestic Group 1 to his CV would be the next logical step.

But I'm sure Royal Ascot's G1 Prince of Wales's S. and the G1 Eclipse at Sandown would be high on the agenda. He's in the G1 Dubai World Cup and the GI Breeders' Classic, more because I persuaded the boss to enter in case we won.

GK: So would the GI Breeders' Cup Classic now be a logical end of season goal?

TV: He has already formed an interesting CV winning at two, three and four over various distances, going and surfaces. As I have said there are no set plans, but the end of the year brings the G1 Arc, the G1 Champion S., and the GI Breeders' Cup Classic.

It's a long time away and I don't know about the Prince but I would be torn between the Arc and the Classic. I would like to see him amass credentials to make him attractive as a stallion to studs in the U.S., Japan or Europe. His win on Saturday has certainly not gone unnoticed from farms in all three jurisdictions.

GK: His dam, Contradict (GB), is obviously a highly valuable part of the broodmare band now. Could you tell us about the mare, and who she has been covered by over the last few seasons?

TV: Contradict was originally in training with Sir Micheal Stoute as a 2-year-old and was placed second and third. Determined to get her to win a small race she went to Mick Channon who won at Salisbury and was fourth in a listed race.

Her first foal by Invincible Spirit (Ire), close inbreeding to Rafha (GB), was stakes winning Orbaan (GB) who was with Andre Fabre. Her second was stakes placed Momkin (Ire) (Bated Breath {GB}) who Roger Charlton trained and raced in the 1351 Turf Sprint on Saturday and is now in Saudi Arabia. She is three-for-three black-type.

She went to Invincible Spirit for two years and was barren and also barren to Frankel (GB). She is currently in foal to Frankel and due at the beginning of March. She will visit Make Believe (GB) this year, and is currently at Coolmore waiting to foal.

GK: And finally, a few words about John Gosden and David Egan?

TV: For David Egan it was a life changing moment for a young talented rider. Even with his $100,000 fine for excessive [whip] use I am sure he will have enough left over to buy a nice house. From a wide draw, he kept Mishriff out of the kick back and produced him at exactly the right time, waiting for the U.S. horses to battle it out in front.

John Gosden is the best trainer in England. To train a horse in the winter months on his own is a phenomenal feat. I also sent him New Treasure (Ire) (New Approach {Ire}) who was third in the Saudi Derby having bought him in the Tattersalls Horses-In-Training Sale [90,000gns from Jim Bolger's Glebe House Stables].

Mr. Gosden's staff have had all the COVID restrictions to contend with in travel, and Thady Gosden did a first-class job handling his training after his arrival where he blossomed each day he was there.