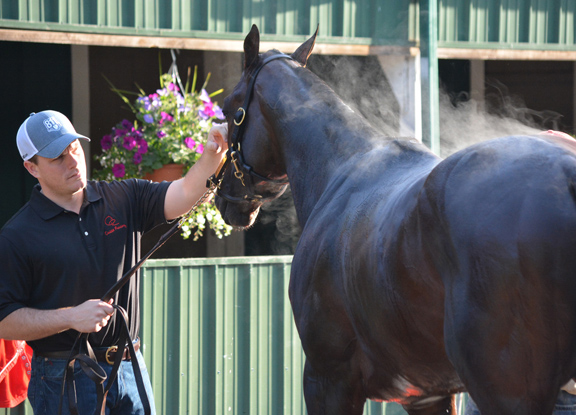 BALTIMORE, Md – A group of about 15 media members–expect that number to swell considerably despite the early hour as the week rolls on–began to line up outside the Pimlico Stakes Barn at 5:50 a.m. as GI Kentucky Derby winner Always Dreaming (Bodemeister) cooled out beneath the shedrow following his 1 1/2-mile gallop Tuesday morning.

A day after getting “fired up” during his GI Preakness S. preparations, Always Dreaming, equipped once again with draw reins and piloted by exercise rider Nick Bush, was on his best behavior at daybreak Tuesday, much to the delight of trainer Todd Pletcher.

“As they say, it was exactly what we were looking for,” Pletcher said with a smile while meeting the media for a brief, five-minute press conference on the Pimlico backstretch at 8 a.m. “It couldn't have gone any smoother. There's not a whole lot to talk about really other than being really really happy.”

Bloodstock agent Steve Young, who signed the $350,000 ticket on Always Dreaming at the 2015 Keeneland September Yearling Sale, was among those accompanying Pletcher to and from the track as the Derby winner trained Tuesday morning.

A group of fans enjoying the first day of 'Sunrise at Old Hilltop' were able to get a closer look at Always Dreaming as he briefly paused and turned to check out the crowd while walking the shedrow following his bath. A popular tradition each year during Preakness week, 'Sunrise at Old Hilltop' allows racing enthusiasts to take a free walking tour through the Pimlico backstretch and grandstand during training hours.

The rising sun began to light up the backstretch as Classic Empire (Pioneerof the Nile), a valiant fourth after suffering a well-documented rough trip in the Derby, made his way out to get his first look at the Baltimore oval at 6:30 a.m.

Sporting a white bridle and a browband with John Oxley's famed stable colors, last year's champion 2-year-old colt was led out of the Stakes Barn by assistant trainer Norm Casse, and was on his toes as he jogged the wrong way along the outer rail. Classic Empire's ears flicked back and forth as he came rolling down the stretch during his strong, one-mile gallop just waiting for his cue from regular exercise rider Martin Rivera.

With temperatures now in the high 60s and the sun really beginning to heat things up beneath clear skies (it is expected to hit 90 degrees the next three days), Gunnevera (Dialed In) and Conquest Mo Money (Uncle Mo) made their way out in succession for routine gallops following the renovation break at 8:45 a.m.

The former seems to have bounced out of his seventh-place finish in the Run for the Roses in terrific shape as he trained with very good energy while trainer Antonio Sano watched from the balcony press box. The chestnut immediately made a striking impression while jogging with the pony upon entering the track and was clearly looking to do more during an easy 1 1/2-mile gallop.

Conquest Mo Money, awfully difficult to miss with a matching lime green bridle, reins, shadow roll and leg wraps, also seemed to glide over the surface nicely beneath regular jockey Jorge Carreno. No worse than second in five career starts, including a game runner-up effort behind Classic Empire in the GI Arkansas Derby, he was supplemented for $150,000 by owner Tom McKenna to compete in the second leg of the Triple Crown.