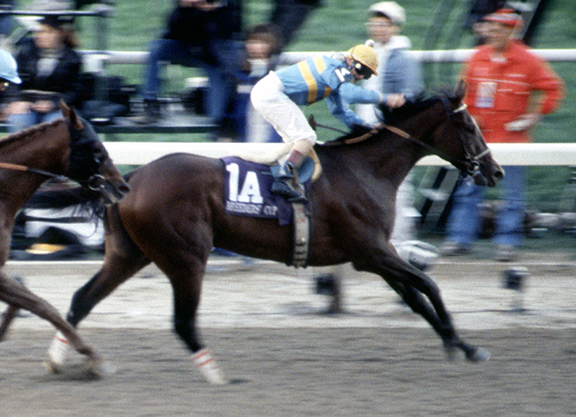 Spoiler alert: This rumination is likely to raise a few eyebrows, if not hackles, because it might appear that we will be crossing over into a discipline not normally associated with our punditry, i.e., pedigree analysis. For those readers and colleagues who specialize in such studies, we have a simple caveat: Your correspondent has a quarter-century resume as a pedigree analyst and while this essay was prompted by a “pedigree discovery,” the summary is based on biomechanics.

Rotten apples, eggs and various other reactionary projectiles can therefore be withheld.

This journey began when we observed sons and grandsons of both Unbridled's Song and Empire Maker had begun to make lots of noise on the racetrack and the breeding shed at about the same time. For example, in 2013, the year that he passed away, Unbridled's Song, whose sire-of-sires legacy was beginning to look a bit dicey, presented us with a penultimate crop which included Arrogate, who would go on to become Champion 3-year-old in 2016. On the racetrack in 2013, Will Take Charge won the Travers on his way to becoming Champion 3-year-old colt. Also in 2013, a previously unraced 4-year-old named Cross Traffic became a Grade 1 winner with a victory in the Whitney and subsequently went on to be the leading freshman sire of 2018. In 2015, Liam's Map blew the doors off, first in the Woodward and then in the Breeders' Cup Dirt Mile and is now a first-crop sire with beaucoup yearling and 2-year-old sales dollars behind him.

About the time that Liam's Map won the Woodward, it was announced that Empire Maker, who'd been exported to Japan in 2010, would return to Kentucky. No doubt this was prompted by the fact that his now late and sorely missed son Pioneerof the Nile had sired of the 2015 Triple Crown winner American Pharoah. That the same son would have a Champion 2-year-old the following year in Classic Empire and that another son of Empire Maker, Bodemeister, sired Always Dreaming, who won the Kentucky Derby in 2017, refocused attention on Empire Maker late in life just as had been the case with Unbridled's Song.

What struck us was that here were two superior stallions who were coming on strongly in ways that did not necessarily reflect the fact that they were sons of Unbridled. Although there were exceptions, each had established himself as a progenitor of a certain type of racehorse–Unbridled's Song usually associated with brilliance, Empire Maker more with classics. We began to wonder whether, given a generational gap or two, it might be interesting to explore–on paper in terms of pedigree crosses and mixes–the way their descendants might come together to reinforce the qualities of their common denominator, Unbridled.

Ironically, somewhat lost in this shuffle was another son of Unbridled who had an impact but quite unlike the other two: Broken Vow. He is a sire of quality fillies headed by Champagne Room, Champion 2-year-old filly of 2016, and a whole bunch of other Graded winners-and good broodmares. Though he has colts that are also quite accomplished, none has gone on thus far to become a sire of note.

We decided to hold those thoughts while enveloped in other projects but then had a head-slapping moment when we realized our original musings had left out that, simultaneously with the sire line exploits described above, Tapit had come to dominate the Leading Sires list. Hailed as the major progenitor of the A.P. Indy sire line, Tapit brought to many of his best offspring a quality of substance different from his sire, Pulpit. For the cause, one need not look further than the second generation of his pedigree where his broodmare sire was listed–and that would be, Unbridled.

Here you had the sires of so many quality horses expanding their tribes to the point that there was going to be an inevitable need to analyze whether it would be wise to mix these pedigrees to get a concentration of “Unbridled blood.”

Although we have advocated duplications in mating suggestions over the years, we have also come to rely on the biomechanical implications of such potential matings by utilizing an algorithmic program that has been quite successful for many breeders for more than 35 years. This program requires that both sire and dam have biomechanical measurements in our database and is based on the genetic principle that physical traits are the ones most likely to be passed on by sire and dam to the foal.

The probabilities of such matings are expressed in five grades between A and C, with a score of B or better judged as a potentially viable match. We judge stallion prospects by computing their biomechanical profiles with a book of mares that are judged to be efficient racehorses; if the stallion scores a B grade with a good portion of that book, we usually like his chances as a stallion. Similarly, we judge broodmare prospects by flipping the process: the mare's biomechanical profile is matched with a group of stallions, usually separated by state or sire line, and the percentage of B-grade stallion matches indicates the mare's probability of success as a producer of efficient racehorses. These projections can be made for colts or fillies as yearlings because their ratings are based on a growth curve that has long been in use by geneticists in many countries.

We decided to utilize this program by grouping stallions together by sire and broodmare sire and broodmares by sire only. We chose only those stallions that are currently alive: On the sire side, the eight most commercial sons of Unbridled's Song; Empire Maker and seven of his sons and grandsons; and Broken Vow. Stallions whose broodmare sires are Unbridled (Mr Speaker, Orb, Shackleford, Tapit); Unbridled's Song (Carpe Diem, Maclean's Music, Medal Count, Tourist); Empire Maker (Outwork); and Broken Vow (Runhappy).

We computed these stallions with books of mares and fillies by individual sires from different Unbridled branches, assuming we had a representative number of such individuals. For example, we computed the Broken Vow mares with every other stallion in the group; the Unbridled's Song-line mares with Broken Vow, Empire Maker-line stallions and those stallions out of mares other than Unbridled's Song. Etcetera, etcetera, etcetera. Important: All such females were included, not just ones judged biomechanically balanced, which is more real-life than restricting books to really good mares.

We gave no consideration whatsoever to pedigree combinations or nicks. We were only interested in whether there were sufficient B-grade probabilities of racing efficiency. For example, what are the B-grade percentages if you bred Arrogate to a mare by Pioneerof the Nile, or Cross Traffic to a mare by Broken Vow, or Tapit to a mare by Bodemeister, or Carpe Diem to a mare by Cairo Prince, or Maclean's Music to a mare by Empire Maker. Would those probabilities have any credence, i.e., would they come close to matching that stallion's profile as a sire when matched with our book of biomechanically balanced mares?

The answers, for the most part, were yes.

We even did spot checks of pedigree crosses with very good biomechanical scores and found that regardless of what the nicks were (and they were widely varied), in most cases we would not look down our nose at the mixes thereof.

This exercise was multipurposed and can be judged by individual pedigree experts or breeders or buyers in whatever way they wish. Bottom line, however, is that there is a stallion whose influence in the 21st Century may have more impact in the next two generations than might have been expected when Carl Nafzger wrapped his arms around Frances Genter and whooped with unbridled joy.

(Bob Fierro is a partner with Jay Kilgore and Frank Mitchell in DataTrack International, biomechanical consultants and developers of BreezeFigs.  He can be reached at [email protected]).