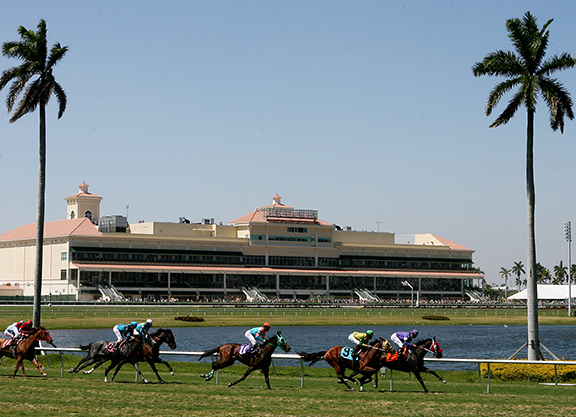 Amerman Racing LLC's Admission Office (Point of Entry) will return from a six-month layoff in Saturday's GIII Tropical Turf S. at Gulfstream Park. Trained by Brian Lynch, the 6-year-old finished in the top three on four occasions in 2019, including in the GII Fort Lauderdale S. at Gulfstream in December. Eighth in the Pegasus Turf, he rebounded to finish second in the 11-furlong GII Mac Diarmida S. at the Hallandale oval last February before coming home fourth in the 8 1/2-furlong Sunshine Forever S. in May. Most recently, he came from off the pace to score in Churchill's Louisville S. June 13.

He added, “He's coming back at a distance that isn't really ideal for him, but it's a good starting point. The good thing about this race is there's plenty of pace, which ideally suits

Ride a Comet (Candy Ride {Arg}) is undefeated in two starts in 2020, both over Woodbine's Tapeta surface. A come-from-behind victor in a seven furlong optional claimer in October, the John Oxley and My Meadowview runner took the GII Kennedy Road S. at six furlongs Nov. 21. The Mark Casse trainee has won at distances ranging from six to nine furlongs throughout his career, including the 2018 GII Del Mar Derby. Tyler Gaffalione gets the call.

William Lawrence's Analyze It (Point of Entry), favored at 2-1 on the morning line, will scratch due to a quarter crack issue per Daily Racing Form's Mike Welsch.