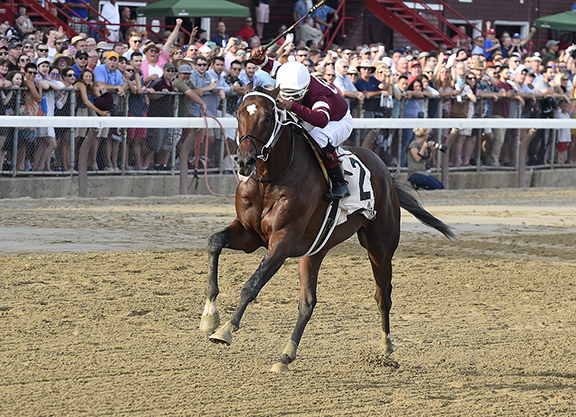 With the GI Runhappy Travers S., the cornerstone of the Saratoga meet, only six days away, a slew of contenders put in their final serious preparations for the Midsummer Derby Sunday morning at the Spa.

Catholic Boy (More Than Ready), seeking to make a successful transition back to the dirt for the Travers, worked an easy four furlongs in :49.44 with a five-panel gallop out in 1:02 3/5 beneath Hall of Fame pilot Javier Castellano.

“We were doing it more for us than him,” trainer Jonathan Thomas said of the colt, who most recently landed his fourth graded stakes victory in the July 7 GI Belmont Derby Invitational S. “I asked Javier to let him gallop out a little piece, and he jumped right onto the bridle and showed he was there for him, and then he slowed him down a little to show he was there. It wasn't exciting, but we weren't looking for exciting.”

Also working Sunday morning on the main track was Phoenix Thoroughbred's Gronkowski (Lonhro {Aus}), who worked five furlongs in 1:00.02 in company with stablemate Instilled Regard (Arch). The work was the fifth at the Spa since Gronkowski made his North American debut with a second-place finish behind Triple Crown hero Justify (Scat Daddy) in the GI Belmont S. June 9.

“He breezed super,” said trainer Chad Brown. “The horse has gotten stronger and fitter. He couldn't be coming into the race any better.”

Gronkowski will join GI Betfair.com Haskell Invitational hero Good Magic (Curlin) as one of two starters for Brown in the Travers. Good Magic turned in his final work for the race Friday, breezing five furlongs in 1:00.44 over the main track.

King Zachary (Curlin), fourth as the favorite in the GIII Indiana Derby July 14, also tuned up for his engagement in the Travers with a five-furlong move in :59.66 on the main track for trainer Dale Romans Sunday.

Over at the Oklahoma training track, Hall of Famer D. Wayne Lukas sent out Bravazo (Awesome Again) to breeze five furlongs in 1:00.11 in company–his final move ahead of Saturday's feature. Bravazo most recently finished second behind Good Magic in the Haskell.

“It went real good,” said Lukas. “We wanted him to go right at a minute, and that's what we got, so that's probably all we need. He did it easy, like they all say. He's doing well, eating well, getting in the tub, I'm looking forward to it. I'm anxious to run him.”

Rounding out the barrage of Travers activity were a pair of Oklahoma breezers from the Steve Asmussen barn, GII Jim Dandy S. winner Tenfold (Curlin) and Churchill maiden winner Meistermind (Bodemeister). Tenfold covered four furlongs in :50.09, while Meistermind, a half-brother to 2009 GI Kentucky Derby winner Mine that Bird (Birdstone), drilled the same distance in :50.19.