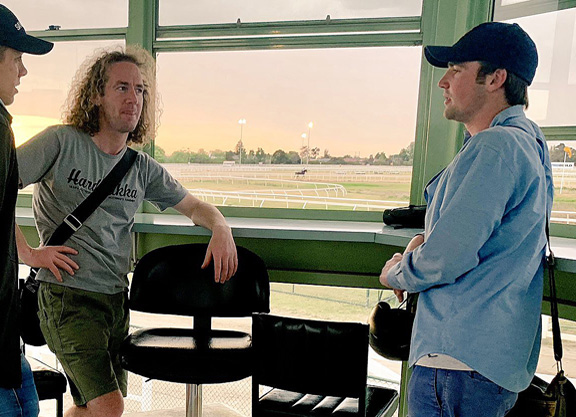 Trainers in Britain can now apply to train in partnership, according to a regulatory update released by the British Horseracing Authority.

A statement issued on Thursday read, “Two separate individuals can now apply for a training partnership licence. If approved, this will result in a new training entity being created and a joint licence to train being granted.

“Both individuals comprising a training partnership are required to meet all the existing pre-requisite criteria covering competency and capability. In addition, both applicants must complete all the related modular training courses in advance of being eligible to apply.”

Training partnerships are already permitted in some European countries and are commonplace in Australia, where four of the top ten entities in the current trainers' championship are partnerships, including the leading duo Ciaron Maher and David Eustace.

British-born Eustace became co-trainer with Maher in August 2018 and since then their training operation has expanded from Victoria to incorporate a Sydney stable. Eustace grew up in Newmarket, where his father James has trained for 30 years and his brother Harry is currently assistant trainer to fellow Newmarket trainer William Haggas.

James Eustace, whose wife Gay also hails from a family steeped in racing, being a daughter of two trainers, Alan and Diane Oughton, and the sister of David Oughton, welcomed the idea that training partnerships could now bring a new element to British racing. He said, “The Australian model clearly has been very good for David and I think it could work well over here, and not just necessarily between family members. With David and Ciaron, it has helped Ciaron expand his business and so far it has worked very well. It gives people opportunities that they might not have had before.”

He continued, “In a way, especially in Australia, one person can't do it on their own if you want to be very big—if you want to be champion trainer, for instance. Similarly here, when we're at full swing, the business is 24/7 and it's hard for one person just to keep it up for very long. With more racing, evening racing and Sunday racing, it's relentless. It must take a toll in a way and it's very important to make sure that you keep all your owners updated. Australia is perhaps even worse than us in that they start even earlier during the day and just keep going. Physically and mentally it's very tiring. So I think this is very much a positive thing. I can't see a downside to it, whether it's families or two people wanting to set up a business together who complement each other, or giving someone a chance who might not have the family background or the finances to do it.”

Two people who already work in partnership, if not in name quite yet, are Daniel and Claire Kubler. The Lambourn-based husband-and-wife team began training in 2012 after they had each worked for a number of different trainers around the world. The licence is currently held in Daniel's name but even a cursory glance at the Kubler Racing website leaves the viewer in no doubt that it is a team operation.

“We've always branded ourselves that way,” said Daniel Kubler. “We decided the year before we started training which one of us was going to get the licence. On the grounds that I was more comfortable doing interviews and that side of things, we felt that it would make more sense therefore for me to do it.”

He continued, “The media naturally refers to the person on the licence and all the credit goes that way without recognising the other person, although I think racing has got much better at putting much more emphasis on the team and mentioning the people who have helped to get the horse to where it is.

“I think in terms of encouraging people, it will give especially women more role models to aim at because young people coming into the industry will see more female names on training licences than there are at the moment.”

Kubler also cited how the phasing-in approach of having two names on a licence can aid training businesses when it comes to a trainer to retire or perhaps to hand over to a younger family member or colleague.

He said, “I don't know exactly when it happened but I've noticed that Mark Johnston Racing has gone to being just Johnston Racing. I think Mark mentioned in his book about how the value of a training business is in one person's name but I'm sure eventually he will be handing over to [his son] Charlie and in theory this would make the transition easier. I used to work for Roger Charlton and it would be the same for someone like him for when he eventually hands over to [son] Harry.”

Kubler added, “If you run a plumbing firm, you can sell your plumbing firm to someone else to take over. If you run a training business, your name is the only value you really have, and up until now passing the business on can be quite messy. Take Australia, for example, where you've got Gai Waterhouse and Adrian Bott, and Adrian has effectively bought into the business. For a lot of trainers that gives you a way to move your business on and ensure that it retains its value.”

Trainers interested in finding out more about training partnerships are advised to contact the BHA Licensing Team.