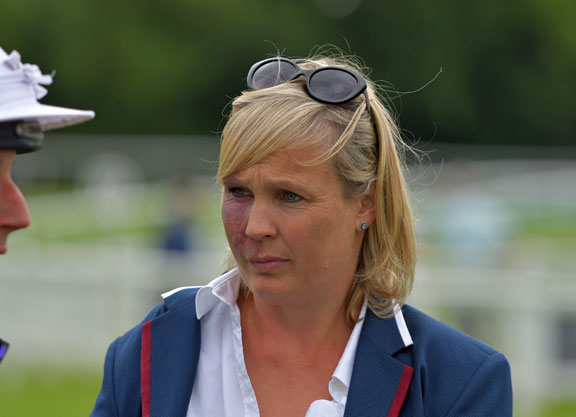 While COVID-19 has ensured that absolutely nothing is business as usual, the permission of racehorses to continue training has provided some sense of normalcy to a business that has otherwise ground to a near halt.

While Britain’s major training centres remain open, some conditioners have taken measures to ease the financial burdens on their businesses and those of their owners, as well as minimize the kind of human contact that permits the spread of the virus. Yorkshire-based trainer Ruth Carr revealed on Wednesday that she has turned out her entire string and closed her stable temporarily until racing is closer to resumption, while Newmarket trainer Phil McEntee has turned out all his older horses and kept just his five 2-year-olds in work.

“All my owners are happy for me to do what I think is best in the situation we find ourselves in,” said Carr. “At this stage, I can’t see us resuming in May. The horses are still getting full care and attention, they are out in a field enjoying the sun, but by doing this I’m reducing the footfall into the yard massively. For all you try hard to disinfect everything– every sweeping brush, every muck barrow, every feed scoop, every gate, every light switch–the list is endless. People would come to the yard and mix with their families, by stopping that I feel I’m doing my part.”

Carr has 55 horses on her books.

“I just feel that I’m doing my bit. I don’t like to train–especially older horses–without a goal. They know their job and training puts miles on them physically and it’s not great for them mentally.”

McEntee has turned out the 15 older horses in his yard, with some soon set to move to land McEntee rents from The Jockey Club.

“They’re all officially down as resting at the moment and we’ve turned them out in a large group,” he said. “I have two or three paddocks in my yard to turn them out in, and they’re running around like idiots for half an hour when you first turn them out so they’re maintaining a fitness level, but straight away we’re going to reduce the training fees while the horses are having this training regime, and not only that but we’re saving money on the gallops fees as well.

“I’m fortunate that I actually have turn-out paddocks at my yard on Hamilton Road in Newmarket, but I also rent 20 acres off The Jockey Club Estates. That’s a six-month lease that I have annually because they’re only allowed to graze that land for six months, and it’s generally from May 1 through Oct. 1. But I’ve discussed it with them and they’ve kindly agreed to let me have that paddock a month early, as of Apr. 1.

“It’s a cost-saving exercise as much as anything else that will help my owners in the long run.”

McEntee said reducing training costs and eliminating gallops fees is “a way of helping everybody.”

“Most of my owners are small business people and their businesses are suffering themselves,” he said. Most of them are either shut down or not earning much income.

“I have only a small team; I have myself plus two employees. I’m lucky to be in the situation where I haven’t had to lay any staff off, because we are a small team.

“My wife and two of my daughters have either been laid off or are working from home. My one daughter does digital marketing, my wife works in a hotel and my other daughter has an apprenticeship doing recruitment. So all of a sudden all my family are at home so I have lots of extra help.”

McEntee said for the most part his owners were also in a position to soldier on, but he shared the story of one that may have to call it quits as a result of COVID-19.

“I’m lucky that two of my main owners, who would have a few horses each with me, they-strange to say-don’t have any children or ex-wives so they have the finances,” McEntee said. “But another owner of mine is 76 and he has underlying health issues. He basically has to be shielded, as the government put it, for the next 12 weeks. He’s retired a long time now, but his sole annual income is from a three-day country fair that he hosts every summer, and that’s been cancelled. He has to stay in his house for three months and can’t come to see his horse, so he’s effectively said for now, and possibly when this is all over, he may not be able to have that horse in training with me anymore. And that horse won five races last year so that’s a shame. He’s just one owner, but it’s the same for everybody.

“I train on the Hamilton Road and I’m surrounded by a lot of the smaller trainers and they have suffered. Horses have left their yard and they’ve had redundancies. It’s a struggle. I’m one of the fortunate ones that I am able to turn my horses out.

“But it’s the same everywhere. I have a brother who trains in Kentucky and he says everywhere he turns the meets are on lockdown.”

Carr said closing her stable was also a means to help owners financially.

“If I reduce the fees to the owners, then hopefully they can look after me long term,” she said. “If I can look after my business and my team by using the government’s generous scheme with the staff getting 80% of the wages, then I will utilise that.

“I’m looking at it as short-term pain for long-term gain, that’s my new catchphrase. The sooner we all realise this, the sooner we’ll be out the other side and we can enjoy our days at the races and the other things in life we’ve all become accustomed to.”

McEntee has four 2-year-olds in work and another being broken in.

“We have five 2-year-olds, four of which are ridden away, and we’ll be training them on a daily basis,” he said. “My daughter Grace is a jockey and another girl, Katie, that works for me, and they need to be riding out. Grace was second in the apprentice championship on the all-weather this winter, and obviously she can’t go and ride out in other yards.”

Hugo Palmer, who operates a larger yard in Newmarket, said that he has turned out some of his later developing 2-year-olds, but that otherwise “95% of our horses are still working away.”

“We’ve just kept in line with what the owners have wanted,” he said. “We’ve sent out a couple of backwards 2-year-olds who probably would have gone to grass in a month’s time for six weeks anyway–they’ve gone a bit earlier than they would have gone. A couple fillies we were going to try to get a win into before they were due to be covered, they’ve gone to be covered.

“Newmarket Heath remains open but we’ve all changed our practices a bit. We’re trying to exercise the horses just in pairs and adhere to the government’s social distancing rules as much as we possibly can within the template of our working day.”

Palmer said if racing in Britain can start up again on the May 1 target-and, he noted, “that’s a very big if”-not much may be lost.

“The whole season is going to be slightly truncated, but we don’t know exactly by how much,” he said. “It’s often pointed out in this country anyway what an almost wasted month of the flat season April is. We start with that wonderful, exciting day of the Dubai World Cup and the Lincoln meeting and you think, ‘here we go,’ but then nothing really happens for two and a half weeks until you get to the Craven meeting and then the [G3] Greenham [S.], and things only really get rolling with the Guineas.

“If-and that’s a very big if-we were only to miss April then I think we’ll have a) gotten away with it very lightly, and b) I don’t think it’ll have too much of an effect. But obviously each month that goes by that we don’t race affects the whole season, and the breed.

“It’s very different but the essence of what we’re doing remains the same, and I hope that will remain that way for the foreseeable future but none of us really know what’s around the corner. Everything is changing day by day, with Ireland stopping racing [on Tuesday], and none of us know when it might start again, although we dream of May but we’ll just have to see.”

McEntee said he has spoken with some of his cohorts about trying to be proactive with maximizing opportunities and minimizing risk when racing does restart.

“There is going to be such a backlog of horses ready to race,” he said. “I think we’re all fully aware that when racing does start back it’s going to be restricted and behind closed doors. I’ve spoken with a few trainers and we’re going to pitch an idea that we might have regional racing in different parts of the country to restrict the movement of horses. Because otherwise if we’re restricted to one meeting per day, for instance, horses would have to travel up and down the country.

The trainers concurred that it is important to keep perspective in such a testing time.

“In the grand scheme of things racehorses missing a few early season targets is a drop in the ocean compared to the enormity of what’s happening on a global scale,” Palmer said. Carr added, “We have to think of people working in the hospitals, on the front line, and people that are going to lose loved ones. For all that racing is a very big industry, sometimes you just have to see the bigger picture.”