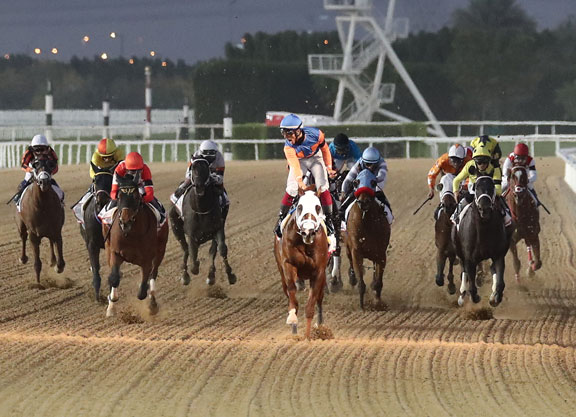 Triumph turned almost immediately to tragedy in Saturday's G1 Dubai Golden Shaheen as the lightly regarded Zenden (Fed Biz) outbroke the field from gate 14, set a wicked pace and had a space on his rivals at the wire, only to take a bad step just a few strides later, dislodging jockey Antonio Fresu while suffering a catastrophic injury.

Better than 50-1 on the international tote, the Florida-based sprinter shot straight into stride from the widest barrier and set off at a breakneck pace while outfooting the fleet-footed Matera Sky (Speightstown), runner-up in the 2019 Shaheen, and Good Effort (Ire) (Shamardal), who set a searching gallop in the G3 Mahab al Shimaal Mar. 6 before being tagged on the line by Canvassed (Ire) (Shamardal). Slipped some rein entering the stretch, always traveling like a winner, Zenden quickly opened up and the result was never in doubt as he stopped the timer in a time that was 1.16 seconds faster than the previous fastest in the six renewals of the Shaheen since it returned to a conventional dirt surface in 2015. Red le Zele (Jpn) (Lord Kanaloa {Jpn}) closed well from the back field for second ahead of Canvassed in third. Of the other American raiders, Wildman Jack (Goldencents) weakened to fourth, while Yaupon (Uncle Mo), drawn two, was slowly away and never factored, finishing eighth. Fresu walked away from the incident unscathed.

A stakes winner at two for trainer Victor Barboza, Jr., Zenden was a Gulfstream Park West optional claimer winner and was second in the 2020 GIII Fred W. Hooper S. in four runs for the Todd Pletcher barn. Turned over to former Jason Servis assistant Carlos David late last year, the chestnut missed by a head in a Jan. 15 optional tagger at Tampa and most recently annexed that track's Pelican S. Feb. 13.

The ill-fated Zenden is the first top-level winner and second graded/group for his sire, who was recently relocated from WinStar Farm to Highfield Stock Farm in Calgary, Alberta, Canada. His dam is a half-sister to three-time Grade I winner Sweet Reason (Street Sense), whose 4-year-old son Diastima (Jpn) (Deep Impact {Jpn}) was Group 3-placed at three in Japan and was an easy allowance winner over two miles on turf last month at Hanshin. You Laughin, a half-sister to GSW & GISP Don't Forget Lil (Kafwain), SW Battle Girl (Midshipman) and GSP My Sixth Sense (Street Sense), was first sold for $2,000 at Keeneland November in 2018 in foal to Commissioner and again for $55,000 at the 2019 Fasig-Tipton February Sale before producing a filly in May 2019. Not covered that season, she is the dam of an Audible colt foaled Mar. 8.