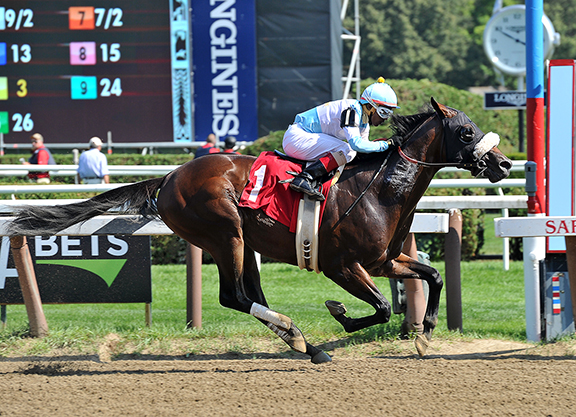 G M B Racing's Tom's d'Etat (Smart Strike) has been confirmed to run in the GI Pegasus World Cup Invitational, Jan. 26 at Gulfstream Park according to racing manager Greg Bensel. The 6-year-old began serious preparations for North America's richest race with a half-mile breeze in :49 flat (19/110) Sunday at Fair Grounds, his first major activity since capturing the Tenacious S. by 3 1/2 lengths Dec. 22 at the New Orleans oval. That was the first stakes try for the bay, who has racked up six victories in nine career outings.

“This will be a true test,” Bensel told the Fair Grounds notes team. “We don't know where he fits in the Pegasus, but I do know that he's won six out of his nine career races so he deserves a chance. He's a horse that can definitely go the distance up against that type of talent. It will be the most talented field there can be.”

Bought for $330,000 as a Keeneland September yearling, Tom's d'Etat announced himself with a nine-length romp in a Saratoga optional claimer last summer, but had gone unseen for over a year before resurfacing with another dominant optional claiming score Nov. 4 at Churchill prior to his Tenacious heroics. He will have two more breezes before the Pegasus, Stall said.