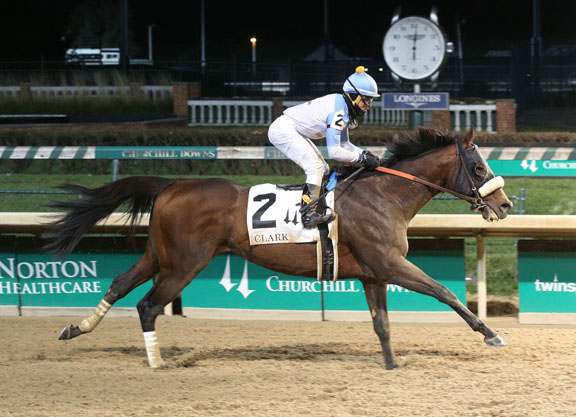 Tom's d'Etat (Smart Strike) has been on a streak over the last few months and is heavily favored on the morning-line to secure his fourth straight victory in Saturday's GII Stephen Foster S. at Churchill Downs, which grants the winner a spot in the starting gate for the GI Breeders' Cup Classic. Capturing a sloppy renewal of the GII Fayette S. at Keeneland in October, the bay followed suit with a decisive score in the track-and-trip GI Clark S. Nov. 29. He kicked off 2020 with a 3/4-length score in the Oaklawn Mile Apr. 11 on a wet track.

“I'm not worried about he's going to show up in the Foster; he runs very well fresh,” trainer Al Stall Jr. told the Churchill notes team. “This race will feed us into the rest of the year, which looks like it's setting up well with the schedules in New York and elsewhere. This is his home track and has a visual of it in front of his stall, sort of like Blame did.”

By My Standards (Goldencents) also rides a hot streak into this race and will give his elder some competition. Kicking off 2020 with a six-length romp in a Fair Grounds optional claimer Feb. 9, the 4-year-old scored a decisive victory in the GII New Orleans Classic S. Mar. 21 and captured the GII Oaklawn H. last time May 2, earning a 102 Beyer Speed Figure.

“[By My Standards] has shown every positive development from his 3-year-old season to this year,” trainer Bret Calhoun said. “He's a very talented racehorse and we saw that with his strong campaign last year. He's just bigger and stronger this year.”

Three-time Grade III winner Owendale (Into Mischief) takes another shot at Tom's d'Etat here after finishing second to that rival in the Clark. The bay rallied from well back to captured the one-mile Blame S. at this oval last time May 2.

Another runner of interest at more of a price is the Todd Pletcher-trained Fearless (Ghostzapper). Opening his account with a pair of good-looking scores at Gulfstream this winter, the $725,000 KEESEP buy was off the board in the New Orleans Classic and closed strongly for second next out in an Oaklawn optional claimer May 2. The bay returned to winning ways last time in an optional claimer at this venue May 30.